McNamara, whose side clinched the League Leaders’ Shield for the first time in 2021, has vowed no let-up from the French side. “This isn’t the last step for the Dragons, this is just the next step and we’ve got to keep making steps,” he said

By Marc Bazeley at Old Trafford

Steve McNamara vowed there is still plenty more to come from Catalans Dragons as their dream of becoming the first overseas team to win the Super League Grand Final was dashed on Saturday.

The French side had taken the lead through a penalty from James Maloney after keeping St Helens at bay early on at Old Trafford and led 10-6 after 50 minutes when Mike McMeeken finished while their opponents had Tommy Makinson in the sin-bin.

Ultimately though, two converted tries from Kevin Naiqama proved enough to seal a 12-10 win for Saints, who claimed their eight Grand Final success and ninth Super League title overall, but McNamara warned the rest of the competition there will be no let-up from Catalans in 2022.

Naiqama stars as Saints make it three in row

“This isn’t the last step for the Dragons, this is just the next step and we’ve got to keep making steps,” McNamara, who oversaw a maiden League Leaders’ Shield win this year and also guided the team to a historic Challenge Cup success in 2018, said.

“What it has done is open up a brand-new market and exposed everybody to a whole new market with Catalans and French rugby league. There are TV cameras here from Barcelona, Paris and all of the national papers in France.

“It has opened things up, and everybody’s eyes and ears as well to what can be achieved if we give teams the opportunity.

This isn’t the last step for the Dragons, this is just the next step and we’ve got to keep making steps.

“We’ve been given that chance and we’ve taken some big steps forward. It’s been a huge effort from everybody at the club.”

The extreme physical nature of the contest was underlined by the fact Catalans second row Matt Whitley played on after suffering a broken hand in the first minute, with the same fate befalling fellow forward Benjamin Garcia later in the game.

Centre Dean Whare tore a pectoral muscle as well and Man of Steel Sam Tomkins played through the pain barrier after returning to action from a knee injury, with Dragons captain Garcia praising the resilience of his team-mates to keep battling right to the final hooter.

“It was very tough,” Garcia said. “For the first 20 or 30 minutes we just defended, but we didn’t crack.

“It was tough, and we had a lot of injuries, but we never gave up – that’s the kind of team we’ve got.”

McNamara was left to question whether St Helens’ Sione Mata’utia should have received sanction following an early confrontation with Maloney when he appeared to throw a punch and if his side should have been awarded a penalty try after Makinson’s yellow card for taking out Fouad Yaha. 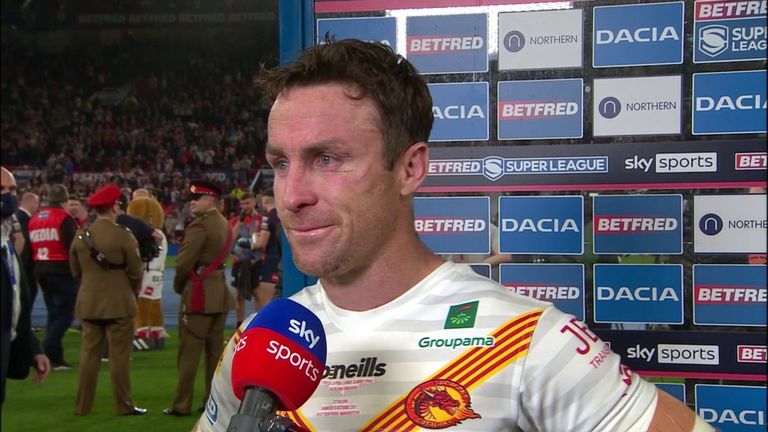 However, the former England boss did not dwell on those incidents and instead was full of praise for the efforts of his side as they came up just short against the reigning champions.

“We’ve lost the Grand Final by two points, but we’ve left everything out there,” McNamara said. “That’s been the case all season, but tonight in particular.

“It came down to a two-point game and we ended up on the wrong side of it, but I couldn’t ask for more from the players in terms of that. I’m extremely proud of what we’ve achieved so far this season, but extremely disappointed just to miss out.

“At the end of the day we’ve lost a game we prepared so well for and invested a lot in, which doesn’t make it any easier.”