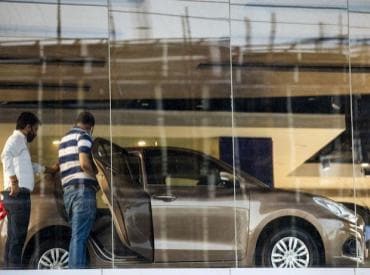 Maruti Suzuki India Ltd., the nation’s biggest carmaker, will shift its focus to higher-end passenger vehicles as small cars — its main source of income — become more expensive and demand for them shrinks.

“Small cars used to be our bread and butter,” Maruti Suzuki India Chairman R.C. Bhargava said in a post-earnings media call. “There’s no butter in small cars anymore. We will have to change our strategy. People with limited income are getting squeezed out of the car market due to higher cost,” he said, adding the market for hatchbacks is “shrinking significantly.”

There has been a 25% decline in the market for hatchbacks in the last four years due to increase in commodity prices and taxes by state governments, Bhargava said. Maruti will adjust its investments to align with demand, which is in higher-end cars, Bhargava said.

Maruti will invest 1.6 billion rupees ($21 million) to expand the annual capacity of its Manesar plant by 100,000 units by April 2024, Bhargava said. Its capital expenditure for the financial year 2023 is expected to be 50 billion rupees, he said.

Maruti reported better-than-expected quarterly income as higher vehicle prices countered rising input costs. Its net income jumped to 18.4 billion rupees for the three months ended March 31, versus 11.7 billion rupees a year earlier, the unit of Japan’s Suzuki Motor Corp. said in a statement Friday. The average estimate of analysts tracked by Bloomberg was for a profit of 14.8 billion rupees.

Like their counterparts globally, Indian automakers are struggling to absorb commodity inflation triggered by the rising price of raw materials and a supply-chain crunch. Car manufacturers including, Maruti, Tata Motors Ltd. and Mahindra & Mahindra Ltd., have raised vehicle prices to pass on those higher costs to consumers and boost revenue.

“The prices of commodities such as steel, aluminum and precious metals witnessed an unprecedented increase during this year,” the company said in the earnings filing, adding that it was forced to raise prices as well as curb costs. “This financial year has been unique owing to an unprecedented global crisis caused by the pandemic and electronic component shortages.”

Maruti Suzuki hiked prices by an average of 1.3% across its models earlier this month, following a previous hike of 1.7% in January. Maruti Suzuki Chief Executive Officer Hisashi Takeuchi, who took on the role April 1, has said the semiconductor shortage and climbing input costs are affecting its business.

Increasing the cost of cars is starting to hurt the company’s sales in India’s price-sensitive market. Local sales in March fell 7.9% year-on-year to 137,658 units.

Meanwhile, parent Suzuki Motor is foraying into India’s electric car market with an investment of 104.4 billion rupees and plans to manufacture EVs and batteries in Gujarat. Maruti was previously reluctant to sell EVs in the nation of 1.4 billion people because of their expensive price and sparse charging infrastructure, according to Bhargava.