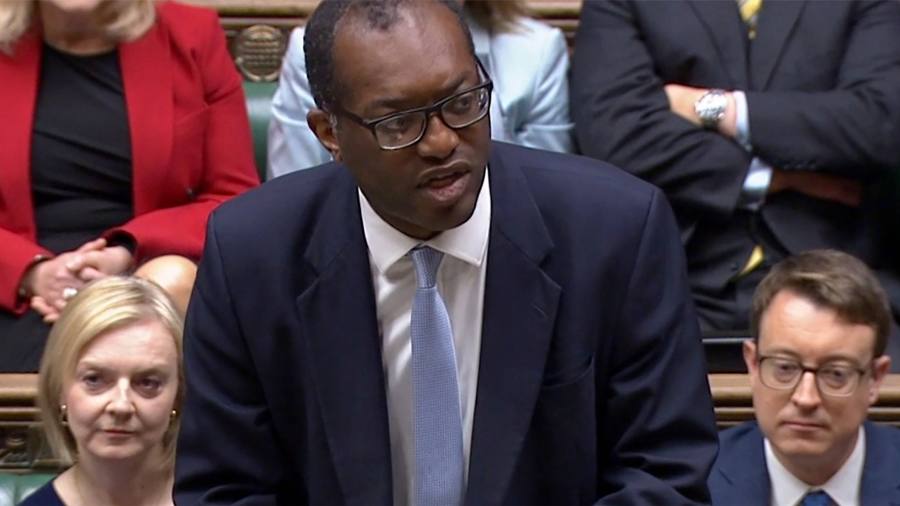 Kwasi Kwarteng, UK chancellor, has taken a huge political gamble with a mini-Budget intended to jolt the British economy back to life, with £45bn of tax cuts, including axing the 45p additional tax rate for the highest earners.

The package will delight many in the City of London and the wealthy. It removes the 45p rate, applied to earnings above £150,000. Kwarteng confirmed he was scrapping the cap on bankers’ bonuses.

Kwarteng said his mini-Budget would boost growth but admitted many of his measures would be unpopular; his decision to increase borrowing on a huge scale puts at risk his party’s claim to fiscal responsibility.

The Treasury said it would ask the Debt Management Office to raise an additional £72bn in the current financial year, revising the total upwards from £161bn in April to £234bn in September.

The chancellor is staking Conservative political fortunes on a belief that radical tax cuts and deregulation can push Britain’s sluggish growth rate back to its pre-financial crisis average of 2.5 per cent.

“This is a new approach for a new era focused on growth,” Kwarteng told MPs, to a chorus of Tory cheers and jeers from the Labour benches.

The raft of tax cuts drew comparisons with Nigel Lawson’s 1988 Budget. The basic rate of income tax will be cut from 20p in the pound to 19p next April, national insurance was cut, stamp duty has been reduced to help first time buyers and a planned corporation tax rise has been scrapped.

But unlike Margaret Thatcher’s chancellor, Kwarteng will borrow tens of billions of pounds to fund his plans, adding to demand at a time when the Bank of England is raising interest rates to bring inflation under control.

The combined cost of the tax cuts by 2026-27 will be almost £45bn. Kwarteng told MPs in a House of Commons statement that his aim was to turn “the vicious cycle of stagnation into a virtuous cycle of growth”.

The chancellor’s package combined tax cuts with a series of supply-side reforms that he admitted could be unpopular in the short term; he insisted he would be “unashamedly” pro-growth.

However, he admitted the transformation of Britain’s growth prospects was “not going to happen overnight”. For Liz Truss’s new government, time is of the essence because an election is expected in 2024.

Anticipating criticism that he was giving undue help to the rich, Kwarteng reminded MPs that the government was intervening to hold down domestic and business energy bills; he said the cost for the first six months would be £60bn.

Kwarteng’s decision to lift a cap on bankers’ bonuses is intended to make the City of London more competitive but leaves the Conservatives open to Labour claims that it is still “the party of the rich”.

Meanwhile, his lifting of a ban on shale gas fracking and a promised overhaul of environmental legislation to speed up infrastructure projects have enraged the green lobby.

His borrowing spree — coming at a time when the cost of serving government debt is rising sharply — is viewed by Labour leader Sir Keir Starmer as a significant moment: Starmer wants to claim the mantle of fiscal responsibility at the next election.

Among other measures announced by Kwarteng, corporation tax rates will stay at 19 per cent, but he will maintain the 8 per cent charge on bank profits, which was due to be reduced next year.

The government’s fiscal rules, which stipulated that debt should be falling as a share of GDP within three years, would be reviewed. “In due course we will publish a medium term fiscal plan,” Kwarteng said.