400m hurdler Jessie Knight was one of six Team GB athletes told to self-isolate after a passenger on their flight to Tokyo tested positive for Covid-19; 27-year-old was allowed to train for her debut on July 31 while quarantine period is set to end on July 30 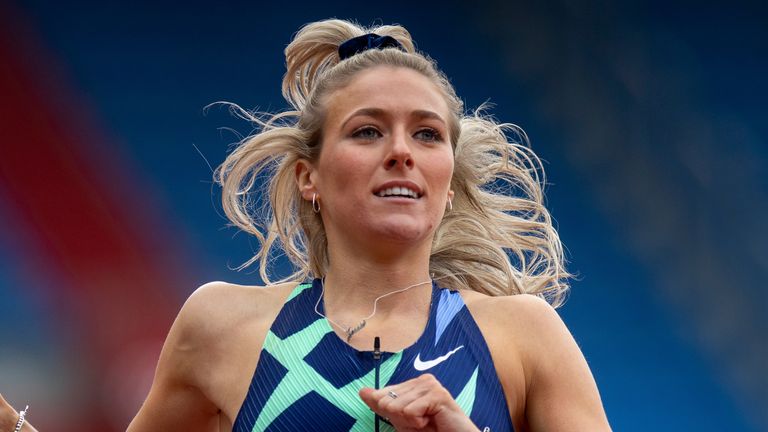 Team GB 400m hurdler Jessie Knight says she is ‘in a really good place’ despite having to self-isolate at the Olympic Games after she was deemed a close contact with someone who tested positive for coronavirus while travelling to Tokyo.

Team GB’s 400m hurdler Jessie Knight says her Olympic spirit has not been dampened despite being forced to self-isolate upon arrival in Tokyo.

Knight is one of six British athletes who were told to self-isolate after a passenger on their flight to Japan tested positive for Covid-19.

The 27-year-old landed in Tokyo on Friday and on Sunday was due to train at the Kawasaki Todoroki Stadium, the athletics training base, but was diverted back to her hotel room by British Olympic Association officials upon arrival.

Despite the disruption Knight was given the go-ahead to resume training while maintaining social distancing and she told Sky Sports News she has been staying positive about her participation in Tokyo.

“Instantly I panicked because I thought I tested positive,” Knight said. “I’ve been tested every morning here, so when I was told that I was just a close contact I was quite relieved to be honest.

“Obviously as an athlete you panic a little bit, my natural instinct was to think that I wouldn’t be able to train but that was not the case and I found that out quite quickly.

“For me the only thing that I really need to do whilst I’m here is training, and I’m able to do that, I’m a lot more relaxed now, I’m getting into a routine now and I’m OK.

“As athletes, we knew coming here that we might have to self-isolate, we might get [Covid-19]. As long as I can train that’s all I need and my preparation won’t be altered at all.”

Knight became a British champion when she won the 400 metres hurdles event at the 2020 British Athletics Championships with a time of 55.80 seconds.

In May, she impressed at the 400m hurdles event at the Golden Spike event in Ostrava, Czech Republic, as she won the race with a personal best of 54.74 seconds in front of Ukraine’s Anna Ryzhykova and Denmark’s Sara Slott Petersen.

As it stands, Knight is due to finish her self-isolation on July 30 – and she is set to make her Olympic debut in the first round of the 400m hurdles event the following day, on July 31.

“The Japanese government do say it’s a 14-day isolation period, obviously everyone is trying to do their best to try and get that shortened just because we’re such in a controlled environment,” Knight said.

“We’re getting tested twice a day, I had Covid-19 in March and I’m double vaccinated, I think I’ve tested negative about 10 times since being here.

“It could be that I don’t go to the Olympic village before my heat but it doesn’t matter, we’re a 45-minute drive away from Tokyo, it’s no different to going to a race at home. I feel really safe here.

“I had a very, very good session over the hurdles yesterday so I’m in a good place. I wouldn’t say my preparations will be affected at all, if anything I’ll be more focused and relaxed.”