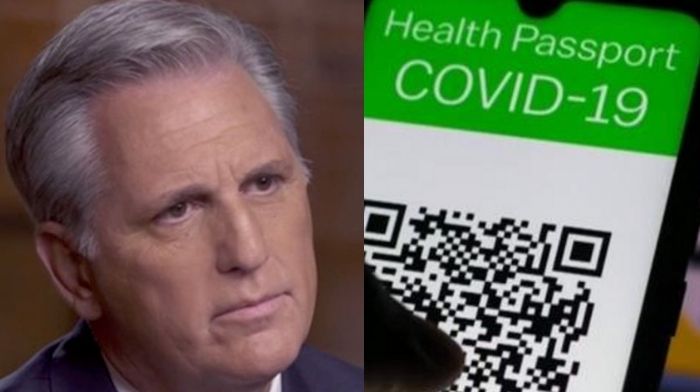 “Thanks to the safe vaccines from Operation Warp Speed, we will defeat the virus. But forcing Americans to carry a ‘vaccine passport’ to go about daily life is unacceptable in a free society,” McCarthy tweeted “That’s something you’d expect in Communist China. Not in the United States of America.”

Thanks to the safe vaccines from Operation Warp Speed, we will defeat the virus. But forcing Americans to carry a “vaccine passport” to go about daily life is unacceptable in a free society.

That’s something you’d expect in Communist China. Not in the United States of America.

“Texans are returning to normal life as more people get the safe and effective COVID-19 vaccine. But as I’ve said all along, these vaccines are always voluntary and never forced,” Abbott said in a video statement. “Government should not require any Texan to show proof of vaccination and reveal health information just to go about their daily lives.”

“That is why I have issued an executive order that prohibits government-mandated vaccine passports in Texas. We will continue to vaccinate more Texans and protect public health — and we will do so without treading on Texans’ personal freedoms,” he added.

DeSantis made similar comments when issuing his order.

“There was never under discussion any mandates to take vaccines. We will not have COVID vaccines mandated in Florida,” DeSantis said.

“The flip side of that though with these vaccine passports is it’s completely unacceptable for either the government or the private sector to impose upon you the requirement that you show proof of vaccine to just simply be able to participate in normal society,” he continued.

Georgia Gov. Brian Kemp (R) has also spoken out against vaccine passports, though it is not clear if he will go so far as to ban them.

“I do not and will not support any kind of state-mandated vaccine passport. While the development of multiple safe, highly effective COVID-19 vaccines has been a scientific miracle, the decision to receive the vaccine should be left up to each individual,” Kemp said.

This piece was written by James Samson on April 8, 2021. It originally appeared in LifeZette and is used by permission.

Read more at LifeZette:
‘The View’ Goes Off The Rails As Meghan And Whoopi Go At It Over GA Voting Law – Ends With Awkward Silence
Ben Carson Rips Ilhan Omar For Comparing Georgia To Apartheid – ‘Disgusting’
Warnock Jabbers About Easter, Gets Schooled

Trump: The Key To Republican Success Is More Trumpism