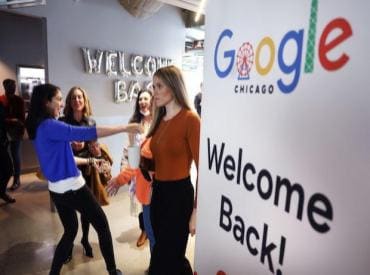 During the early days of the pandemic, the narrative was that remote-working was a grind for younger workers stuck in cramped apartments and bliss for their seniors living it up in airy home offices.

The juniors were missing out on in-person learning, while their superiors were more focused on how to spend the savings from fewer train tickets.

In fact, attitudes to remote working are far less polarized.

The majority of traditional office workers appears to value the chance to work from home at least one day a week. There is some variation according to age, but it’s not large or consistent enough to be significant. 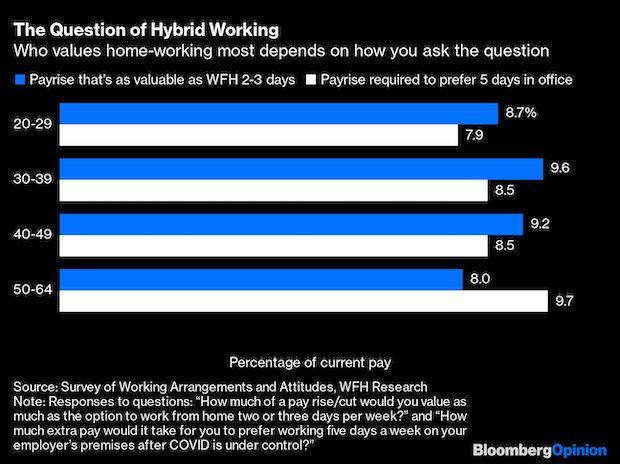 A recent study by consultants McKinsey & Co. found that workers aged 18 to 34 were 59% more likely to leave than 55- to 64-year-olds if their employer didn’t offer a hybrid work arrangement.

The larger Survey of Working Arrangements and Attitudes (a collaboration between Chicago, ITAM, MIT and Stanford universities) presents more nuanced findings. Workers in their 20s were most likely to start looking for a new job if their employer denied them hybrid working. But over-50s were most likely to quit there and then. (Of course, younger workers may have itchier feet generally, and older workers may have an eye on retirement.)

A lot depends on how you ask the question. Invite workers to think of the option of WFH for two or three days in terms of a pay rise, and those in their 30s will give it the highest value. Ask what pay rise would be needed to work in their employer’s premises five days a week and it’s the over-50s who want the biggest bump. The important point is that support for a hybrid arrangement is high across the board. The appeal of reduced commuting time — often the most cited benefit of remote working — clearly goes beyond older workers. Younger workers may feel the hit of transport costs on their disposable income more acutely; the more central parts of public-transport networks are often the most crowded. Meanwhile, millennials have had a couple years to get used to co-working and negotiating communal space with housemates.

What does all this mean for employers? The tightness of the labor market and the need to attract up-and-coming talent will continue to force most large firms to offer the option of at least some remote working. The snag is that the long-term impact of this shift remains unknown.

Part of that early pandemic meme — the loss of on-the-job learning and in-person interaction — should remain a concern. Lower office occupancy means less knowledge transfer between generations and weaker internal relationships. These can be seen as sources of competitive advantage as much as the ability to attract talent. When things go wrong at companies, the explanation often comes down to culture.

Even if activity can be neatly divided into solo tasks best done remotely and collaborative tasks best done in the office, something inevitably gets lost in the divorce — learning by imitation and the ability to tap on a colleague’s metaphorical open door, for example. These benefits don’t disappear with hybrid working, but they risk being diminished.

So expect employers to offer the hybrid option while encouraging use of the office. One thing that might help on this front is proposing more flexible working hours to dodge peak travel times and deal with non-work commitments. The second-biggest reason that WFH is attractive is the ability to manage domestic and social responsibilities, according to a survey of London workers by King’s College London. Commuting costs may become a more explicit part of salary negotiations. Companies should also respond to what people consider the downsides of office work — often, the prevalence of distractions. For example, Alphabet Inc.’s Google reportedly plans for future offices to give people more room. This reinforces the trend towards corporate tenants seeking higher-quality space in prime locations. Vacancy rates for top-grade offices were just 4% in central London against 8% overall at the end of 2021, according to property consultants Cushman & Wakefield. Developer British Land Co. recently pre-let a building in London’s financial district four years ahead of its scheduled completion.

But upgrading the offices of the world’s major cities for the post-pandemic era won’t happen overnight. Unless attitudes radically change, or the balance of power between employers and employees shifts, the hybrid experiment is going to have plenty of time to show results.