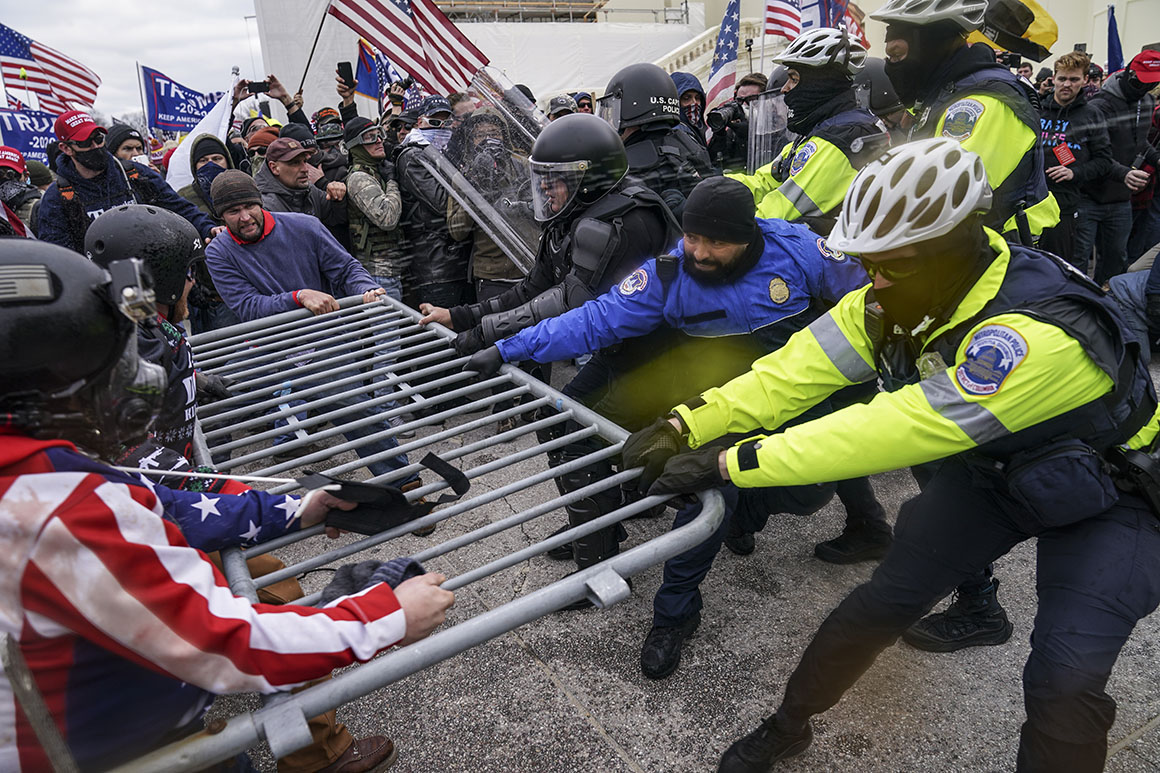 “The Court takes Eisenhart at her word,” Lamberth, an appointee of President Ronald Reagan, wrote in a 17-page order he issued shortly after a hearing held via Zoom. “She, like her son, invoked the American Revolution, indicating support for violent revolt. In fact, she even indicated that she was willing to give her life in support of her cause. Thus, Eisenhart, too, has indicated that she is willing to repeat her behavior.”

The decision means that two of the most notable figures from the Jan. 6 insurrection will remain detained for the foreseeable future and gives prosecutors the upper hand in expected negotiations for a potential plea deal. They’ve both been in custody since their arrests in Tennessee more than a month ago.

Munchel, 30, appeared in a now famous image in the Senate chamber clad in military-style tactical gear, his face fully masked. His mother, 56, was seen in surveillance footage along with Munchel at their hotel and on the Capitol grounds.

During the detention hearing earlier Wednesday, prosecutors disclosed that after the Jan. 6 riots, Munchel had been in contact via Signal with a local leader of the Proud Boys about joining the far-right group, which promotes political violence.

Munchel’s attorney, Sandra Roland, emphasized that the messages appeared to originate with the Proud Boys, suggesting they were recruiting him. Lamberth referenced this briefly in his opinion and noted that Munchel was seen fist-bumping a member of another violent group, the Oath Keepers, at the Capitol.

Roland suggested that the pair were acting on impulse and that Munchel hadn’t planned anything in advance with anyone. “They wandered into the Senate gallery,” she said.

However, Lamberth dismissed as “detached from reality” the defense arguments that the pair’s actions amounted to little more than trespassing or civil disobedience.

“Munchel’s alleged conduct occurred while Congress was finalizing the results of a Presidential election,” the judge wrote. “Storming the Capitol to disrupt the counting of electoral votes is not … akin to a peaceful sit-in.”

The judge also pressed Roland about why Munchel and Eisenhart procured the now-famous zip ties while they were on Capitol Grounds. Munchel’s lawyer said the government presented no evidence that he intended to use them and that sorting it out was not a matter for the detention hearing.

“He took them. He never threatened anybody with them. … It’s certainly obvious he never used them,” she said.

A federal magistrate judge in Tennessee ruled last month that both Munchel and Eisenhart should be released. However, prosecutors quickly sought and received an order from one of Lamberth’s colleagues, Chief Judge Beryl Howell, blocking the releases until both defendants could be moved to Washington.

Apparently because of Covid-19 precautions, they didn’t arrive in the capital until Friday night. They joined the hearing on Wednesday via video link from a D.C. jail facility.

Lamberth notably accepted the fact that both Munchel and Eisenhart were unlikely to flee. He said both have limited or non-existent criminal histories. Instead, the judge deemed them a danger based heavily on their post-Jan. 6 commentary about their decision to invade the Capitol.

“Indeed, few offenses are more threatening to our way of life,” he wrote. “Munchel‘s alleged conduct demonstrates a flagrant disregard for the rule of law. Munchel is alleged to have taken part in a mob, which displaced the elected legislature in an effort to subvert our constitutional government and the will of more than 81 million voters.”

Likewise, he said, “Eisenhart gleefully entered the Capitol in the midst of a riot. She did so, the grand jury alleges, to stop or delay the peaceful transfer of power. And she did so accompanying her son, who was carrying a dangerous weapon. Eisenhart took these actions in front of hundreds of police officers, indicating that [she] cannot be deterred easily.”

Prosecutor Ahmed Baset disputed the notion that the pair were entirely peaceful and simply went into the Capitol on a lark. “We know that they showed up dressed for combat,” he said.

Baset also repeatedly argued that just because President Joe Biden has been sworn in, the danger from people like Munchel and Eisenhart has not abated.

“We are not in a position necessarily to be able to risk the release of individuals willing to die for a cause that still remains a cause,” Baset said. “The fact that President Trump is no longer in power does nothing to diminish that.”

Dr. Fauci Says ‘Possible’ Americans Might Have To Wear Masks Into 2022

A sharp surge in bond yields coupled with rising commodity prices have come back to haunt equity markets, with most

Explained: How bond yields impact stock market & what should investors do?

The week in 43 photos