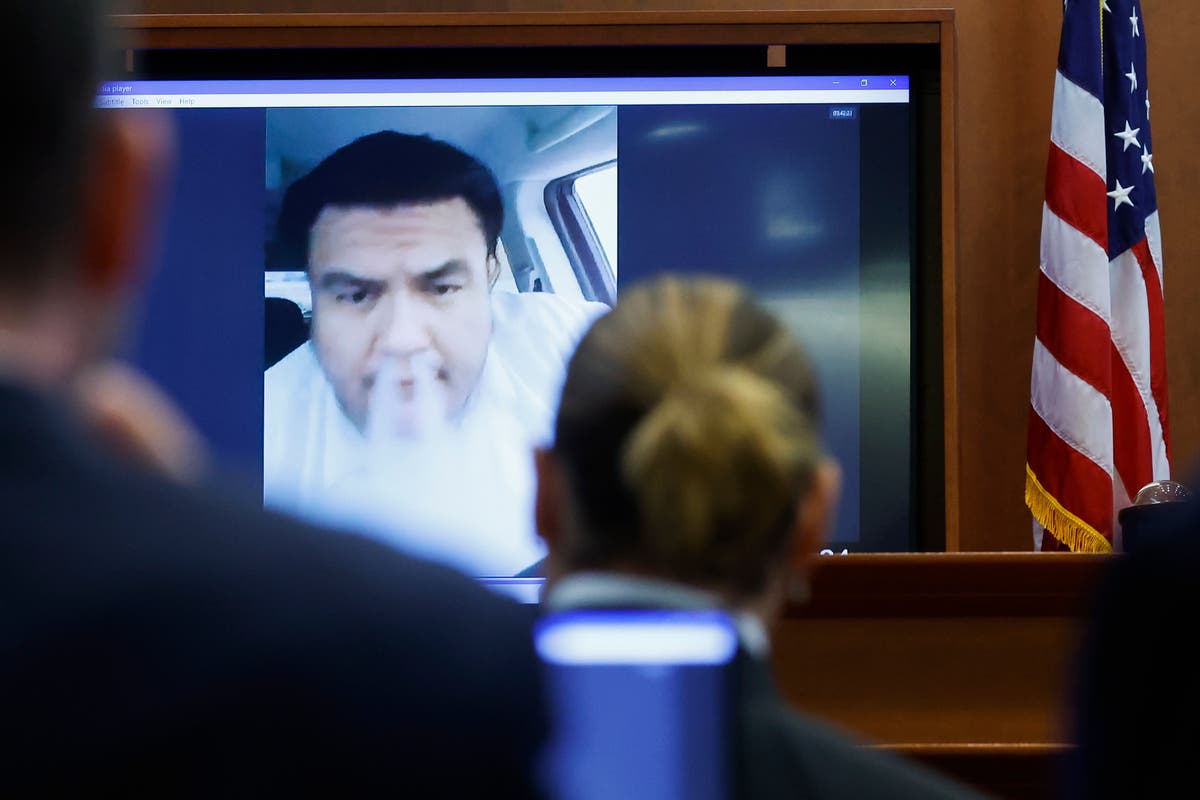 In one of several viral moments to come out of the ugly legal battle between Johnny Depp and Amber Heard, the testimony of the concierge at their former building stood out on Wednesday.

Alejandro Romero works at the front desk of the Eastern Columbia Building in Downtown Los Angeles where Depp owned five penthouses and lived with Heard for three years.

In pre-recorded deposition played to the court, he appeared frustrated as he answered questions from his car while vaping and clearly did not want to be bothered.

The defamation trial between Depp and Heard began on 11 April in Fairfax, Virginia following Depp’s lawsuit against his ex-wife in March 2019. He is suing her for $50m, arguing that she defamed him in a December 2018 op-ed published in The Washington Post titled “I spoke up against sexual violence — and faced our culture’s wrath. That has to change”.

She is countersuing him for $100m for nuisance and immunity against his allegations.

Mr Romero was employed at the downtown condo building in 2016 and was questioned by Heard’s lawyer Elaine Bredehoft about the period around 21 May that year in which police responded to a 911 call reporting a domestic violence incident in Depp and Heard’s penthouse.

The bluntly spoken concierge was clear that he recalled little detail about the couple’s time in residence, and court case or no court case didn’t appear to want to recall anything.

“You sent me the papers to review, and I didn’t even want to review it because it’s been so long. It’s like I just don’t want to deal with this anymore,” he said.

While other video depositions showed witnesses in offices or at their homes, Mr Romero was seated in the front seat of his car, drank soda, vaped, and at one point was driving.

Depp was seen smirking before chuckling at the frank and honest reaction to being asked to recall details of events from years before.

A good portion of the questions from Heard’s lawyer concerned whether he has seen any injuries on her face or if he believed she had been wearing makeup to cover marks or swelling.

Pressed repeatedly on whether she was wearing different types of makeup — foundation, concealer, etc — he again appeared frustrated, replying he never saw any signs of physical abuse and would have said something if he had.

He added: “You would cover any bruise, but you cannot cover the swelling.”

Towards the end of the deposition, Mr Romero appeared to start driving. When the recording had been turned off, Judge Penney Azcarate said that had been a “first”.

The concierge’s disinterest and frustration as shown in the video join a number of other memorable moments from the first three weeks of the trial.

These include: Heard’s apparently fed up former assistant’s surly testimony; Depp predicting an objection to his testimony; the revelation he doesn’t watch his own movies; Heard’s lawyer objecting to his own question; and expert witness Dr Shannon Curry shutting down a question from Heard’s lawyer with the words: “stop talking about muffins”.

A number of shocking details of the couple’s tumultuous relationship have been submitted as evidence to date, including obscene text messages and audio recordings, and vivid descriptions and photos of the aftermath of fights, including Depp’s severed fingertip and human faeces on a bed.

‘No success’: Russian troops continue to storm the Azovstal steel plant to no avail