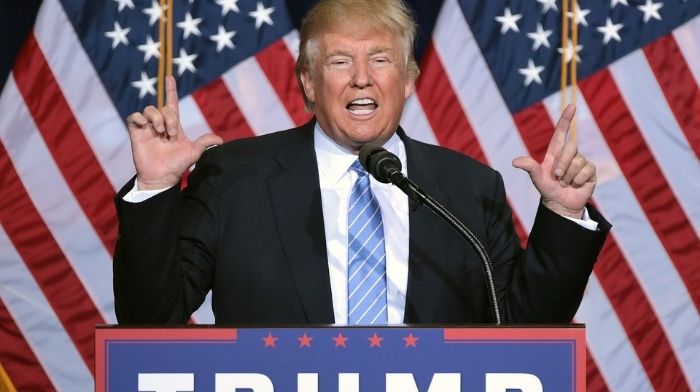 Amid much speculation about his future in politics and more specifically with the Republican Party, former President Donald Trump gave an interview to Newsmax indicating he could run for President again.

During an interview with Newsmax’s Greg Kelly on Wednesday, the 45th President would not commit to a second White House bid, but he did leave listeners with some juicy teasers.

“I’m looking at poll numbers that are through the roof. … I’m the only guy that gets impeached and my numbers go up. Figure that one out. … Typically, your numbers would go down. They would go down like a lead balloon.”

Democrats and the GOP Establishment are terrified. https://t.co/3qJK0AvOt6

RELATED: Biden’s ‘Green Economy’ Will Be A Train Wreck

Speculation about Trump running for President in 2024 – in the event that he lost the 2020 election – began even before Election Day.

Sen. Lindsey Graham (R-SC), on an appearance on the Brian Kilmeade Show, laid out a sound road to a second bid, “I would encourage him to think about doing it. Create an organization, platforms over the next four years to keep his movement alive.”

While Democrats and the media might be fervently hoping that Donald Trump might just quietly retire to Mar-a-Lago, there is no indication that will happen.

If Trump decides not to run in 2024, other possibilities that have been mentioned are the idea of starting a third party as a challenge to never-Trump establishment Republicans.

Still another prospect for Trump is that he remains very active in the Republican Party. Trump has called out Republicans such as Senate Minority Leader Mitch McConnell (R-KY) after McConnell blamed him for the Jan. 6 Capitol riot.

Trump has stated on several occasions that he would focus on supporting any primary challengers to never-Trump establishment members in both the House and the Senate.

The numbers seem to bear out Republican voters wanting Trump to play a vital role in the future of the party.

A new POLITICO/Morning Consult poll conducted in the days following the Senate trial shows that despite the impeachment managers’ gripping presentation and video laying out Trump’s role in the Jan. 6 rampage, the GOP remains the undisputed party of Trump https://t.co/I2FYC2gkdC

There Have Been Hints At The Future

As far back as October of last year, there have been hints that Donald Trump would not be done with the presidency, even if he lost in 2020.

Former White House Chief Strategist Steve Bannon made what might now appear to be an on-point prediction.

Bannon told “The Australian” that “2020 won’t be the end of Donald Trump,” and that “If for any reason the election is stolen from, or in some sort of way Joe Biden is declared the winner, Trump will announce he’s going to run for re-election in 2024.”

At the White House Christmas Party in December, Trump himself teased during a live stream to the Oklahoma Republican Party that “We’re trying to get another four years,” in a reference to election litigation that was ongoing at the time.

Trump then added, “But otherwise I’ll see you in four years.”

Trump at the White House Christmas party: “It’s been an amazing four years. We’re trying to do another four years, otherwise I’ll see you in four years.”

Exclusive: Trump’s 2024 presidential plans. Steve Bannon predicts if Trump loses the election, he will run again in 2024. “You’re not going to see the end of Donald Trump,” he says. https://t.co/TzPeKvoAIb

Recently, in an interview with the Associated Press, RNC Chairwoman Ronna McDaniel stated that the RNC would remain neutral, and “not actively back” Trump should he decide to run again.

McDaniel said that her preference would to see Trump help the GOP “win back majorities in 2022.”

There is a visible split amongst the McConnell wing of the party and the Trump wing.

Trump recently attacked McConnell as being “weak,” and called him a “dour, sullen and unsmiling political hack.” Trump and McConnell have exchanged words in the past.

Average Republicans seem to be siding with Donald Trump, and are getting tired of establishment Republicans like Mitch McConnell.

An Axios/Ipsos poll shows large numbers of Republicans who are ready to vote for Trump again in 2024.

Whatever Donald Trump decides to do in the future, he will have millions of MAGA Republicans behind him. It would be in the best interest of the establishment to pay attention.

The Ted Cruz Fiasco Is A Good Reminder: Never Apologize To The Mob

With Biden Behind on Confirmations, Senators Are Overloaded With Hearings

At conservative conference, Trump is still the golden boy

Lady Gaga Speaks Out For The First Time Following The Kidnapping Of Her Dogs: “I Will Pay $500,000 For Their Safe Return”

Cardi B and Sister Want Dismissal of MAGA Supporters’ Lawsuit