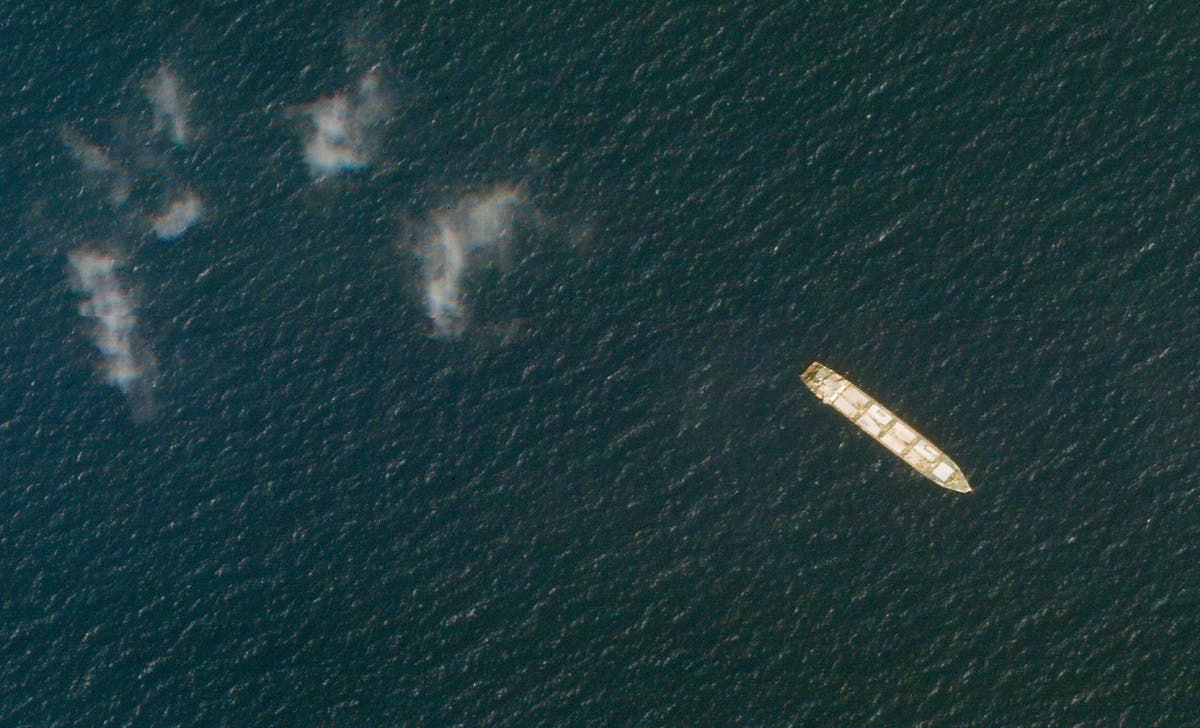 Iran has disclosed that a ship it had deployed to the Red Sea had been struck by a mine, an attack attributed to Israel by unnamed American officials.

The attack on the MV Saviz coincided with the start on Tuesday of high-level diplomatic talks aimed at reviving the nuclear deal forged in 2015 by Iran and other world powers that maintained checks on Tehran’s  nuclear programme in exchange for relief from United States sanctions.

The talks, which began hours after the attack, were a modest success, resulting in diplomats agreeing to form two separate working groups aimed at rolling back US sanctions imposed by former President Donald Trump and reducing elements of Iran’s nuclear programme that violate the limits of the nuclear deal, called the Joint Comprehensive Plan of Action (JCPOA).

“Everybody around the nuclear deal came to the conclusion that no solution is better than the JCPOA and no path is better than to fully implement it,” Iran’s president, Hassan Rouhani, said in a speech Wednesday.

Iranian foreign ministry spokesman Saeed Khatibzadeh said during a Wednesday morning briefing that the Saviz, which he described as a commercial ship, had been hit by an explosion a day earlier off the coast of Djibouti.

The New York Times cited unnamed American officials as saying Israel was behind the attack, which was in response to an attack on an Israeli-owned cargo ship and part of a series of tit-for-tat attacks by Israel and Iran on each other’s ships.

Mr Khatibzadeh said the cause of the explosion was under investigation, but Iran’s Tasnim news agency, affiliated with the Revolutionary Guard, said the damage was caused by an “explosion of limpet mines” attached to the ship.

Mr Khatibzadeh said there had been no casualties and declined to ascribe blame. He said theSaviz is stationed in the Red Sea as part of an effort to provide logistical support to anti-piracy efforts. But other maritime security experts have described the ship as a floating armoury providing logistical support to Iranian Revolutionary Guard intelligence and military operations in Yemen and the Red Sea.

Israel’s Prime Minister Benjamin Netanyahu staunchly opposes a US return to diplomacy with Iran, even as many in the Israeli national security community back the nuclear deal as a sensible arms-control measure.

Mr Netanyahu and like-minded Washington hawks convinced Mr Trump to withdraw from the JCPOA in 2018 and launch a campaign of maximum pressure on Iran with the aim of obtaining a better deal.

The strategy failed. The sanctions ultimately prompted Iran to increase the stockpile and purity of its nuclear programme and relaunch other sensitive technological pursuits which could be used in the assembling of atomic weapons. But Mr Netanyahu continues to demand that the US not re-enter the JCPOA.

“We must not go back to the dangerous nuclear deal with Iran, because a nuclear Iran is an existential threat to the state of Israel and a great threat to the security of the world,” he said in a speech on Tuesday.

President Joe Biden campaigned on a promise to return to the JCPOA, but under pressure from Washington hawks has since insisted Iran scale back its nuclear programme before it lifts sanctions. Iran has insisted the US first remove the sanctions.

The US and Iran communicated indirectly during the talks in Vienna on Tuesday, with officials of the other JCPOA signatories — France, the United Kingdom, Germany, Russia and China — serving as interlocutors. Russia’s envoy Mikhail Ulyanov praised the US for what he described as a softening of its stance.

“The US position appears to be not bad. I am not saying ‘good’ or ‘wonderful’, but ‘not bad’,” he told the Interfax news agency. “They are listening to arguments.”

US officials were optimistic about the possibility of a return to the deal but cautioned that a breakthrough was not imminent. “We know these will be tough talks.” he said. “We know there will be difficult discussions ahead. But again, this is a healthy step forward.”