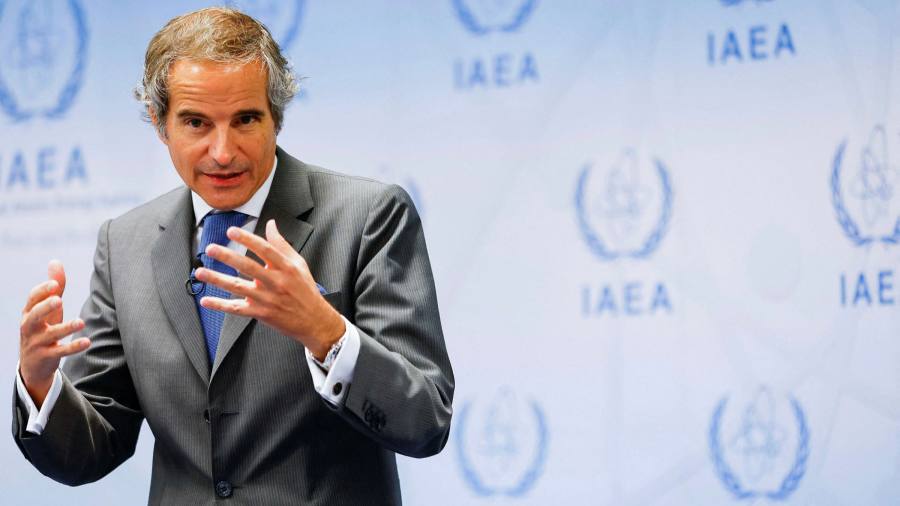 Iran has warned the UN atomic watchdog that it is removing 27 cameras used to monitor nuclear activity from its facilities, in a dramatic escalation of the Islamic republic’s stand-off with the west.

Rafael Mariano Grossi, director-general of the International Atomic Energy Agency, said the move by Tehran “poses a serious challenge to our ability to continue working there”.

The decision by Iran appeared to be a retaliatory step after IAEA member states approved a resolution on Wednesday criticising Tehran over its atomic activity. It deals a further blow to floundering diplomatic efforts to revive the 2015 nuclear accord the republic signed with world powers.

“We are in a very tense situation, with the negotiations on the revival of the JCPOA [the 2015 accord] at a low ebb, [and] with our bilateral process,” Grossi told reporters. “Now we are adding this to the picture, so as you can see it’s not a very nice one.”

Iran did not immediately respond to Grossi’s comments. But Iran’s foreign ministry spokesman Saeed Khatibzadeh said in a post on Twitter late on Wednesday that “the initiators are responsible for the consequences. Iran’s response is firm & proportionate.”

The resolution, which was passed by 30 of the IAEA’s 35 members, underscored the west’s frustration with Iran and its concerns about the scale of its nuclear activity.

It said the board “expresses profound concern” over uranium traces found at three undeclared sites in the republic that were “not clarified by Iran”. It called “upon Iran to act on an urgent basis to fulfil its legal obligations and, without delay, take up [Grossi’s] offer of further engagement to clarify and resolve all outstanding safeguards issues”.

The IAEA’s work in Iran is considered vital to any chances of reviving the nuclear accord.

Tehran accepted one of the IAEA’s strictest monitoring programmes after signing the deal with the US, Germany, UK, France, Russia and China. But it has increasingly been accused by western officials of becoming less co-operative with the IAEA as it has aggressively ratcheted up its nuclear activity.

Under the deal, the Islamic regime agreed to curb its nuclear activity in return for the removal of many western sanctions. But Tehran has been locked in a stand-off with the US since former president Donald Trump unilaterally abandoned the accord in 2018 and imposed waves of crippling sanctions on the republic.

Iran responded by expanding its nuclear activity, and it is now enriching uranium at its highest ever levels and close to weapons grade.

US President Joe Biden pledged to rejoin the 2015 accord and remove many sanctions if Iran returned to compliance with the agreement. But indirect talks between Washington and Tehran have stalled as the two main protagonists have been unable to agree on crucial outstanding issues.

These include Tehran’s demand that the Biden administration remove the terrorist designation on Iran’s elite Revolutionary Guards, the most powerful arm of the state security apparatus, which was imposed by Trump.

Grossi said the removal of the cameras would leave about 40 in Iran. These are used to monitor activities including the production of centrifuge parts and research and development. The cameras being removed included those at facilities in Natanz, Tehran and Isfahan, he said.

Western powers have warned for months that unless an agreement to revive the nuclear accord is reached soon, the deal will become redundant because of the level of Iran’s uranium enrichment.

If the diplomatic efforts collapse, the US and its European allies are expected to attempt to increase pressure on Iran through more punitive measures, which would risk a further escalation of tensions.

One killed, trains torched as Agnipath protests spread across India

Rupee closes at all-time low of 77.74 against USD amid elevated oil prices