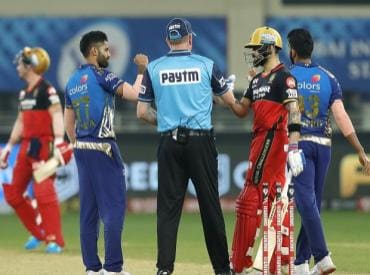 Royal Challengers Bangalore (RCB) are one of the three IPL sides never to have won an IPL title — Delhi and Punjab franchises being the other two — and the fact that the India skipper Virat Kohli has been leading the franchise since 2013 makes their failure in winning an IPL title even more noticeable.

Although they made the play-offs last time after a gap of four years, RCB have failed to get their balance right over the last few years. Their middle-order has always been brittle and their batting has depended solely on the Virat Kohli and AB de Villiers duo in recent years.

This season though they have decided to strengthen it by including Australian hard-hitter Glenn Maxwell and Kerala batsmen Mohammed Azharuddeen, who scored a 37-ball century in Syed Mushtaq Ali T20s, and Sachin Baby.

RCB have also bought New Zealand’s bowling all-rounder Kyle Jamieson and Australia all-rounder Daniel Christian. Both can provide the impetus towards the end of the innings.

Virat Kohli’s team had till recent years relied on a pace attack that was one-dimensional, relying mainly on pace or some early swing, while lacking the ability to change pace and bring in variations. However, with the likes of Aussies Daniel Sams and Christian, they have bowlers who can use change in pace. They also have Kane Richardson.

They also have Mohammed Siraj and Navdeep Saini and one of the two will take the new ball. The spin-bowling attack comprises Australian leg-spinner Adam Zampa besides Yuzvendra Chahal and off-spinner Washington Sundar.

Mumbai Indians would look to become the first team to win a hat-trick of IPL titles. On paper, MI seem to have a squad capable of making a run to the trophy. They have retained their batting core comprising captain Rohit Sharma, Quinton de Kock, Suryakumar Yadav, Ishan Kishan, Kieron Pollard, and the Pandya brothers, Hardik and Krunal.

Kishan, de Kock and Yadav were especially destructive last season, scoring 516, 503 and 480 runs, respectively, while Hardik and Pollard consistently provided near-perfect finishes to the MI innings, making them one of the most complete batting units in the tournament.

Teams playing against MI last season were cautious to see off the new ball combination of Trent Boult and Jasprit Bumrah. Boult’s New Zealand teammates James Neesham and Adam Milne have been added into the team this season, bolstering their options in the bowling department. Neesham is also a valuable option as a lower order batsman.

A lack of clear-cut options in the attacking spinner’s department could prove costly for Mumbai as they will be playing on Indian pitches, as opposed to the UAE stadiums where Bumrah and Boult made merry last year.

However, such is the strength of the rest of the squad that MI might as well paper over that particular crack midway through the season, if not at the beginning itself. They are notorious slow starters, MI have not won any of their season opening matches since 2013. The trend set in the early part of the seasons has often turned out to be wrong in their case.

The MI vs RCB IPL match will be telecast live on the Star Sports 1 HD/SD and Star Sports Hindi 1 HD/SD. You can watch the live streaming of MI vs RCB match on Hotstar+Disney, Jio TV and airtel stream.

Down with Covid-19, Sachin Tendulkar hospitalised as precautionary measure