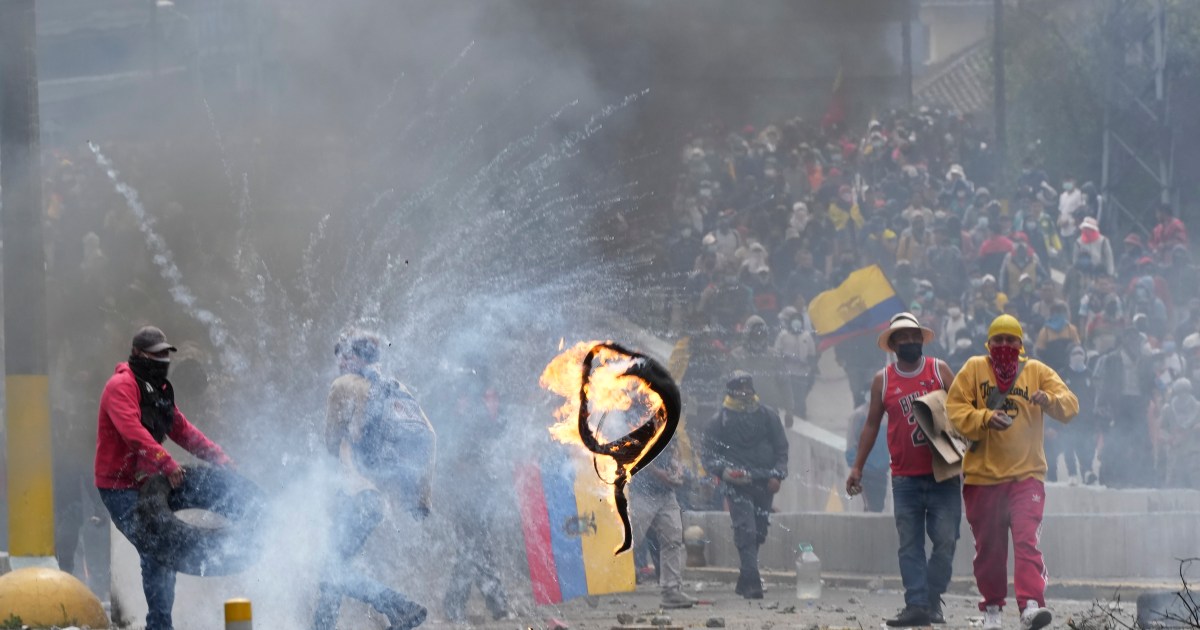 On Tuesday, an estimated 10,000 Indigenous people took to the streets of Quito.

An Indigenous protester has died in Ecuador as violence increased amid days of anti-government protests that the country’s military has labelled as a “grave threat” to democracy.

On Tuesday, an estimated 10,000 Indigenous people took to the streets in the capital Quito, continuing demonstrations that began on June 13 over fuel prices, unemployment and President Guillermo Lasso’s conservative government.

Protesters carried sticks, fireworks and shields made out of road signs and were met with crackdowns by security forces, particularly in the north of the capital where officers, including some on motorcycles and horseback, attempted to disperse the crowds using anti-riot vehicles equipped with tear gas and water cannon.

Several hours south, in the Amazon town of Puyo, a member of the Quichua Indigenous group died during a confrontation with law enforcement while participating in a roadblock.

Lina Maria Espinosa, a lawyer with the Alliance for Human Rights organisation, told AFP news agency the man was “hit in the face, apparently with a tear gas bomb”.

Police, however, said: “It was presumed that the person died as a result of handling an explosive device.”

This follows the death last week of a young man who police say fell into a ravine in a town on the outskirts of Quito during a protest. The country’s prosecutor’s office has opened a homicide investigation into the incident.

Amid the violence, President Lasso on Tuesday agreed to participate “for the good of the country” in a “frank and respectful dialogue process” with the powerful Confederation of Indigenous Nationalities of Ecuador (CONAIE), which called for the protests – that were joined by students, workers and other Ecuadorians feeling the economic pinch.

However, CONAIE leader Leonidas Iza, who was released last week after being detained during the demonstrations, said any talks would be conditioned on a repeal of the state of emergency that has been called in several of Ecuador’s 24 provinces, which allows the right to assembly to be suspended and the military to mobilise against protesters.

In a statement broadcast on social media, the Indigenous leader said the government’s response to the protests “has only managed to exacerbate the spirit of the population and generate serious escalations of conflict”.

That came after defence minister Luis Lara said on Tuesday that Ecuador’s democracy “faces a grave threat from … people who are preventing the free movement of the majority of Ecuadorians” with widespread blockades.

Flanked by the heads of the army, navy and air force, Lara warned that the military “will not allow attempts to break the constitutional order or any action against democracy and the laws of the republic”.

Ecuador’s Alliance for Human Rights has reported that at least 90 people have been injured and 87 detained since the start of the protests.

The police have reported that 101 uniformed personnel, including soldiers, were injured, another 27 officers held by protesters, and 80 protesters arrested.

Indigenous people make up about one million of Ecuador’s 17.7 million inhabitants and are disproportionately affected by rising inflation, unemployment and poverty that has been exacerbated by the coronavirus pandemic.

The alliance is credited with helping topple three presidents between 1997 and 2005.

In 2019, CONAIE-led protests forced then-president Lenin Moreno to abandon plans to eliminate fuel subsidies. Eleven people died and more than 1,000 were injured in the unrest.