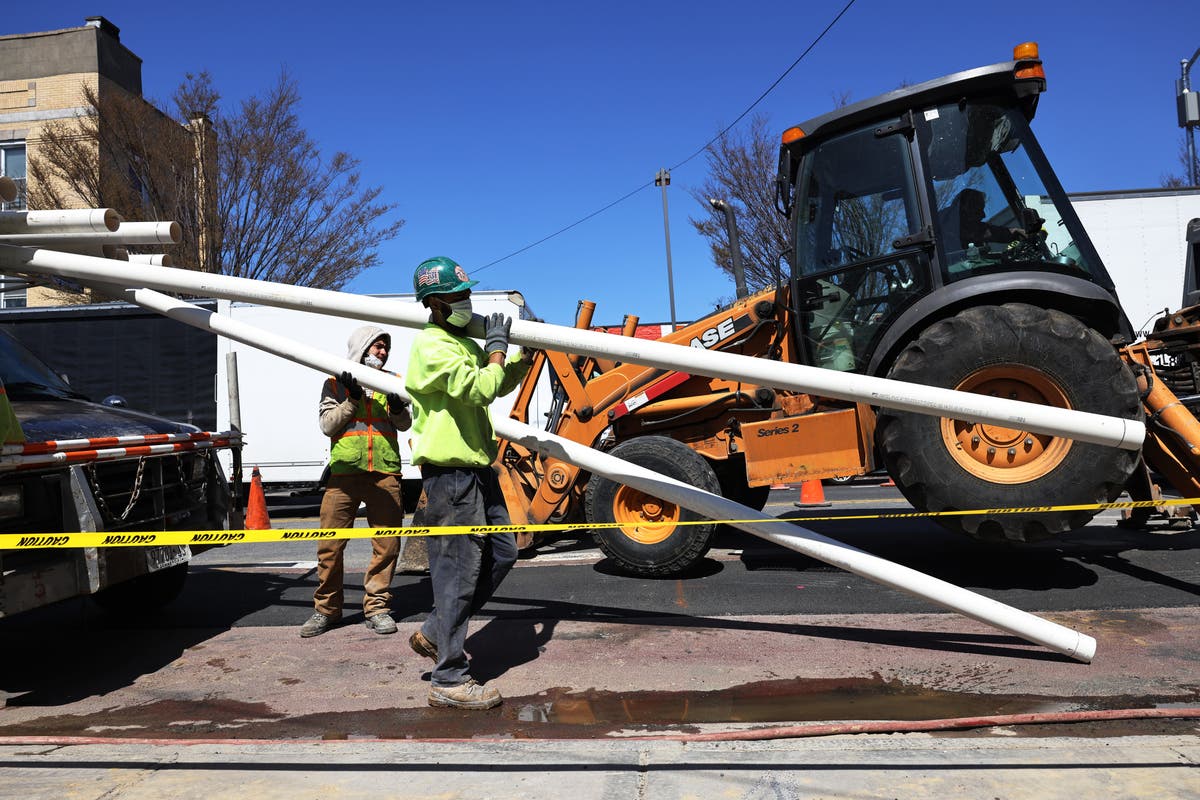 In remarks urging Congress into action, Joe Biden has pressed Republicans to support a sweeping infrastructure package, what he has called a “once in a generation investment in Americans”, as White House officials begin designing the contours of the $2 trillion proposal.

During an address to the nation aimed at lawmakers on Wednesday, the president said there is “no time to lose” on his American Jobs Plan.

“But here’s what we won’t be open to,” he said in remarks directed at GOP officials. “We will not be open to doing nothing.”

“Inaction is simply not an option,” he said.

Republicans have dismissed the plan as overly broad in their arguments over the semantics of traditional “infrastructure”, while administration officials and Democrats have pushed for nationwide improvements to roads and bridges, water systems, broadband internet access and supply-chain production, among other areas, while arguing for US manufacturing and innovation to keep up with competitors like China and the pace of the climate crisis and growing socioeconomic disparities.

Mr Biden said it’s “not rational” for Republicans to narrowly define infrastructure plans in the face of urgent and evolving crises.

“The idea of infrastructure has always evolved to meet the aspirations of the American people and their needs, and it is evolving again today,” Mr Biden said. “How many of you know when you send your child to school the fountain they’re drinking out of is not fed by lead pipe? How many of you know the school your child is in still has asbestos in the walls? Is that not infrastructure?”

Mr Biden’s American Jobs Plan would raise $2.5 trillion over 15 years through a proposed tax plan that would ensure a foundation for the administration’s sweeping infrastructure proposals while also closing loopholes and reforming other elements of the tax code that has allowed large companies to skirt or eliminate their liabilities.

The plan would raise the corporate tax rate to 28 per cent from its current 21 per cent – partially rolling back elements of Donald Trump’s massive tax cuts in 2017, when the rate was 35 per cent.

“Tax reform is not a zero-sum game, with corporations on one side and government on the other,” Treasury Secretary Janet Yellen told reporters on Wednesday. “There are policies that are mutually beneficial … Win-win is a very overused phrase, but we have a real one in front of us now.”

She said Trump-era tax cuts created a “race to the bottom” on corporate taxes that have only encouraged US companies to move profits into offshore tax havens.

Mr Biden said his plan “means companies are not going to be able to hide their income” outside of the US.

“It’s just not fair,” the president said in his remarks. “It’s not fair to the rest of the American taxpayers. We’re going to try to put an end to this … I’m not trying to punish anybody, but dammit, maybe because I come from a middle-class neighborhood, I’m sick and tired of ordinary people being fleeced.”

Ms Yellen also criticised the former president’s tax cuts – embraced by GOP members of Congress – for their lack of investments in transportation and research and development.

The Treasury secretary said that the White House proposal will help America “compete on our ability to produce talented workers, cutting-edge research and state-of-the art research – not on whether we have lower tax rates than Bermuda or Switzerland”.

Secretary of Commerce Gina Raimond told reporters at the White House on Wednesday that there is “not a shred of evidence that cuts in 2017 increased growth and productivity” in the US.

She told Republican lawmakers and large companies with their ears to “come to us and come up with a reasonable, responsible plan”, not a wholesale rejection.

“We have put forth a bold proposal and a reasonable way to pay for it,” she said. “If you don’t like this, what’s your idea?”

Congressional Republicans – on the heels of their rejection of Mr Biden’s widely popular $1.9 trillion American Rescue Plan to combat the economic fallout from the coronavirus pandemic – have embroiled Democrats and media into a semantics debate, despite a majority of Americans supporting broad federal investments in infrastructure.

Retired Sgt. David Pleoger details a phone call he had with Derek Chauvin in May 2020, after Chauvin kneeled on George Floyd’s neck

‘Kill the bill’: More than 100 arrests at London protest