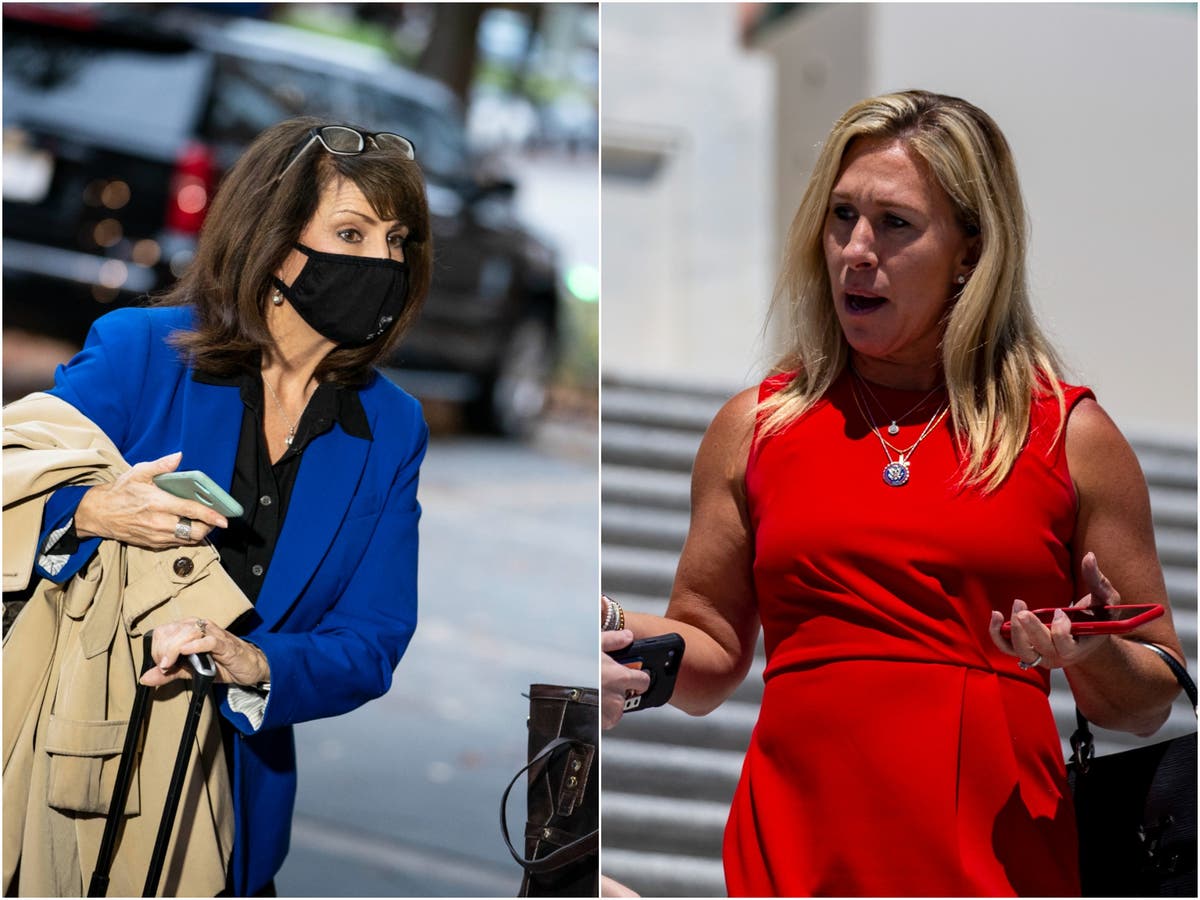 Speaking to the Chicago Sun-Times on Thursday, Ms Newman recounted what has led to well-documented animosity between the two representatives, whose Capitol Hill offices are across the hall from each other.

The two freshmen lawmakers clashed in February as the House was debating the Equality Act, which would prohibit discrimination on the basis of sex, sexual orientation and gender identity.

Ms Newman has a transgender child who transitioned around five years ago.

Ms Greene tried and failed to block a vote on the Equality Act, and the House passed the measure that same month. The chamber previously passed the measure in 2019. It still hasn’t received a vote in the Senate, where the filibuster’s 60-vote threshold is a major obstacle to passage.

Ms Newman placed the trans flag outside her office, with Ms Greene responding only hours later with a large sign that said: “There are two genders. Male & Female. ‘Trust The Science.’”

Ms Newman had shared her daughter’s story on the House floor, meaning that it was public knowledge on Capitol Hill that she had a transgender child.

“That sign is still there,” Ms Newman told the paper on Thursday. “It’s still hateful and all of her behaviour, her hate, and her spewing is indicative of who she is. And so it says nothing about the issue or the topic, which is just equality.

“Which is, you know the LGBTQ+ community is not asking for more or less, they’re just asking for equality, and that’s very reasonable.

“So, what I will say about Representative Taylor Greene, is, that she’s deeply broken, and I hope she gets help.”

Ms Greene was stripped of her committee assignments earlier this year following a vote in the House, where the Democrats hold a slim majority, after making racist and anti-semitic statements and pushing baseless conspiracy theories.

She was temporarily suspended from Twitter on Monday for spreading Covid-19 vaccine misinformation.

WBEZ Chicago reported that Ms Greene once again went after Ms Newman and her transgender daughter during the fundraiser.

“Her so-called daughter is a trans, biological adult son, approximately close to the same age as my two, very much biological real girls – daughters,” Ms Greene said regarding Ms Newman, prompting some in the assembled audience to laugh.

“I call her Marie Newperson. ‘Cause she doesn’t believe in gender! I don’t want to offend her, so I changed her name from Newman to Newperson… She is very confused. As a matter of fact, so is her son,” Ms Greene said.

Ms Newman told the Chicago Sun-Times: “Honestly, I just ignore her and block her out. She’s not a serious member of Congress, and I’m there to do very serious business.”

The Independent has reached out to the office of Ms Greene for comment.

France will request 24-hour Covid tests from some European arrivals