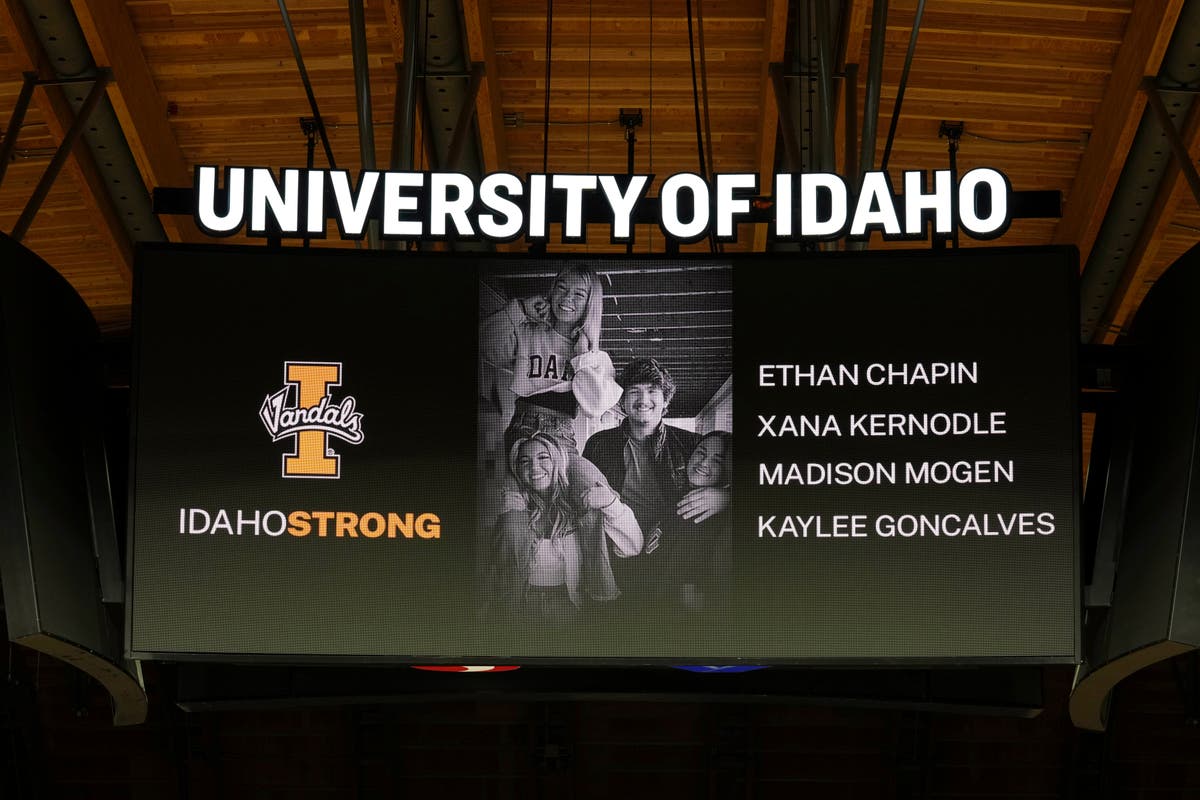 Police investigating the violent murders of four University of Idaho students have admitted that they’re stumped as to how the two surviving roommates managed to sleep through the brutal knife attack without being woken.

Kaylee Goncalves, Madison Mogen, Xana Kernodle and Ethan Chapin were stabbed to death inside a home in King Road, Moscow, in the early hours of the morning of 13 November. The coroner said that they were stabbed multiple times each with a large knife and were likely sleeping in bed when the attack unfolded. Their bodies were found on the second and third floors of the three-storey home.

Goncalves and Mogen had spent Saturday night at a bar in downtown Moscow while Kernodle and Chapin attended a sorority party on campus together. All four victims returned to the home at around 1.45am.

The three female victims live inside the home close to the university campus, along with two other female students.

The pair were unharmed in the violent knife attack and appear to have slept through what happened.

A 911 call was made from the property at 11.58am on Sunday from the cellphone of one of the roommates, reporting an “unconscious individual”.

In a press conference on Sunday, police said that the surviving roommates “did not wake up until later that morning”.

When pressed about how the two women managed to sleep through the violent stabbings of four individuals, officials admitted it is something investigators are also struggling to understand.

“I don’t even know that information at this point in time,” said Chief James Fry of the Moscow Police Department. “That’s why we’re continuing to investigate.”

When the roommates woke up on the Sunday, they called some unidentified friends to the home because they believed that one of the victims on the second floor “had passed out and was not waking up”.

After the friends arrived on the scene, one person in the group made the 911 call.

The roommates and the unidentified friends were still on the scene when officers arrived.

The call was made from the cellphone of one of the surviving roommates but police are continuing to remain tightlipped about the identity of the caller. It is also unclear what the roommates and “other friends” had discovered prior to placing the call and what led them to describe a victim as merely “unconscious”.

The coroner has revealed that the victims bled out from their injuries and that the scene was unlike anything she had ever seen.

Investigators have ruled out the surviving roommates and all the other individuals in the house when the 911 call was placed as potential suspects in the case.

On Sunday, police doubled down on this assertion, insisting “no” that the 911 call was not made by the killer.

The mystery surrounding the 911 call and how the killer managed to murder four people across two floors of the home without waking up the roommates are just some of the many unanswered questions surrounding the brutal murders that have rocked the small college town.

More than one week on from the murders, investigators still have no suspects in the case and no arrests have been made.

Police admitted on Sunday that they have no idea whether or not the killer is still in the small town of 25,000 people or if they have fled the area.

Officials are currently seeking surveillance footage from “two areas of interest” around the city as part of the investigation.

“Investigators have determined the two areas of interests within the city and have provided maps which are on our Facebook page and on our website,” Roger Lanier, operations captain of Moscow Police Department, said during a press conference on Sunday. “And these are areas that they have canvassed for additional surveillance video and tips and have contacted several residents in the areas.”

Police urged businesses and residences within the geographical areas to share all outside surveillance video taken between 3am and 6am on 13 November – whether there appears to be motion and content or not.

Police have not revealed the reason for the particular window of time.

All four victims are believed to have returned to the student home by around 1.45am. Footage from a food truck van showed Goncalves and Mogen buying late-night food at around 1.41am before an unnamed “private party” drove the pair home.

Multiple calls were made from the phones of Goncalves and Mogen to the phone of Ms Goncalves’ former longtime boyfriend between 2.26am and 2.52am. None of the calls were answered.

The time of death of the victims is believed to be around 3am or 4am, officials said last week.

Investigators could be hoping to spot the killer in surveillance footage around the city, after they left the property.

As well as the roommates, police have also ruled out Goncalves’ ex-boyfriend and a mysterious man captured on the food truck footage in connection to the killings.

Relatives, friends and local volunteers were seen combing through the grounds of the Arboretum and Botanical Gardens on the University of Idaho campus, The Independent revealed on Sunday.

The search was organised by the cousin of Kernodle and is on the same road as several Greek houses, including the Sigma Chi house where Kernodle and Chapin spent some of their final hours.

The murder weapon has not been recovered, with investigators searching for a military-style Ka-Bar or “rambo” knife they believe to have been used.

No motive has been given for the attack though police continue to insist it was “targeted”.

There was no signs of sexual assault on any of the victims but Latah County Coroner Cathy Mabbutt said that each victim was stabbed multiple times and in different places on the body.

Despite the brutality of the violent slayings, local officials spent the first three days on from the murders insisting that there was “no ongoing threat” to the public and that the victims were targeted in a “one-off”, “targeted” attack.

On Wednesday, officials appeared to walk back these comments, admitting that “there is a threat”.

“We still believe it’s a targeted attack, but the reality is, there’s still a person out there who committed horrible, horrible crimes,” said Moscow Police Chief Fry. “So there is a threat out there still, possibly. We don’t know it’s going to be to anybody else. But we all have to be aware of our surroundings and make sure that we’re watching out for each other.”