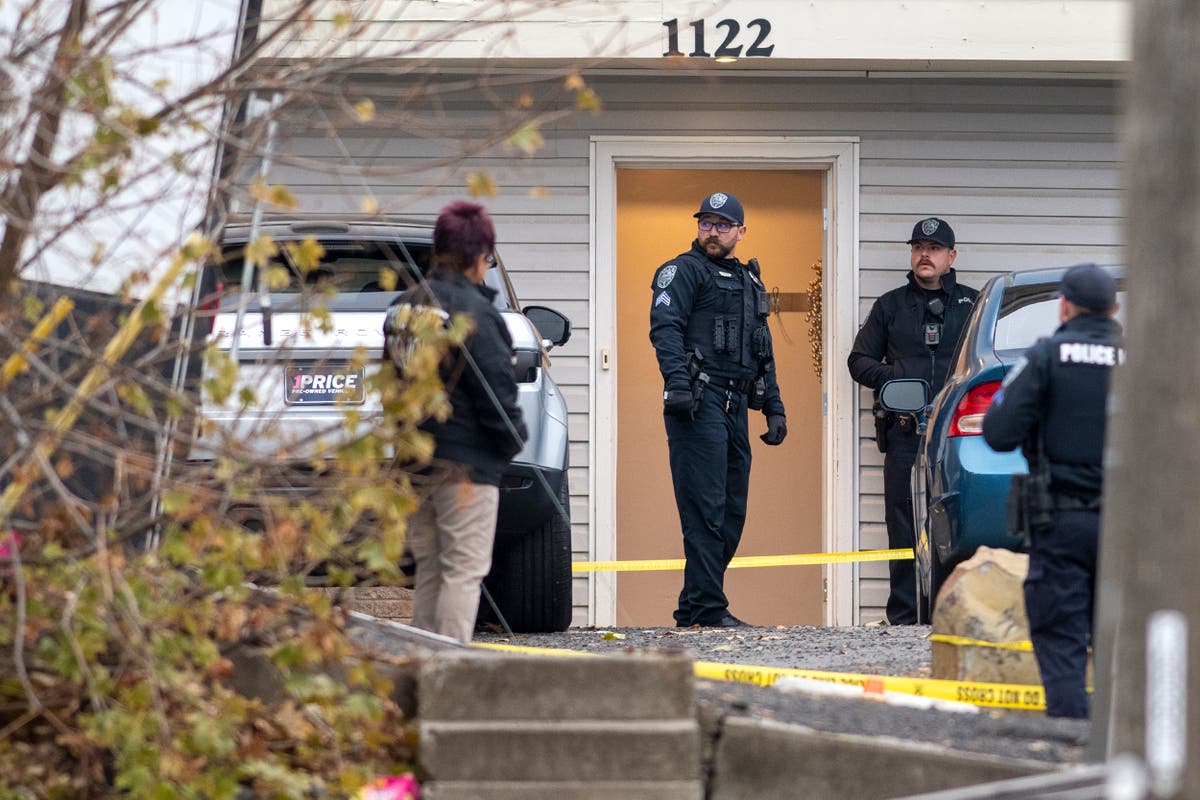 Police have cordoned off the parking lot of a home where four University of Idaho students were found stabbed to death.

Investigators have expanded the crime scene to cover an area in the back of the home that had not previously been blocked off, Fox News Digital reported. New police tape and a small group of investigators could be seen in the parking lot behind the three-storey home on 1122 King Road on Monday.

It is unclear whether the department has cordoned off the area to preserve potential evidence from contamination or if new developments in the investigation into the horrific stabbings of Xana Kernodle, 20, Ethan Chapin, 20, Kaylee Goncalves, 21, and Madison Moge, 21, have already been made.

The Independent has reached out to the Moscow Police Department for comment.

Former homicide detective Ted Williams, who was on the scene, told Fox that authorities may have marked the area as part of the crime scene to canvass for a possible murder weapon. It is believed that the killer used an “edged weapon such as a [military Ka-Bar-style] knife,” which has not been recovered.

“If [the killer] wanted to get rid of the weapon, the knife that was used to kill these four young people, they could have dumped that knife anywhere back here,” Williams said.

Police have said that the bodies were found on the second and third floors. The second-floor rear door appears to be at level ground with the parking lot.

Fox News Digital reported that the two surviving roommates, who called 911 about nine hours after the murders, were on the first floor.

During a press conference on Sunday, Police Captain Roger Lanier denied reports that the victims had been found tied and gagged and said that any information circulating online about the identity of the 911 caller was mere speculation.

Mr Lanier added that the two surviving roommates, a male seen on Twitch video that also featured Goncalves and Mogen at a food truck hours before the murders, and an individual who drove the two of them home that night are not considered suspects.

The deaths have been ruled homicides with the killer or killers still at large a week on from the slayings. Latah County Coroner Cathy Mabbutt confirmed that some of the victims had defensive wounds from the knife attack, adding that she had seen “nothing, nothing like this” in her almost two-decade-long career.

There was no sign of sexual assault on any of the victims but they each suffered “pretty extensive” wounds, she told NBC News, confirming that each victim was stabbed a different amount of times and in different places on the body.

Two roommates were in the house at the time of the attack but were not harmed. They are not necessarily considered witnesses or suspects in the investigation, police said.

Officials have refused to reveal who called 911 but did provide new details about the mystery call, adding that it was made from the cellphone of one of the two roommates.

Authorities said that more details will be released during a press conference scheduled for Wednesday.

When will we know the results of the US midterm elections?