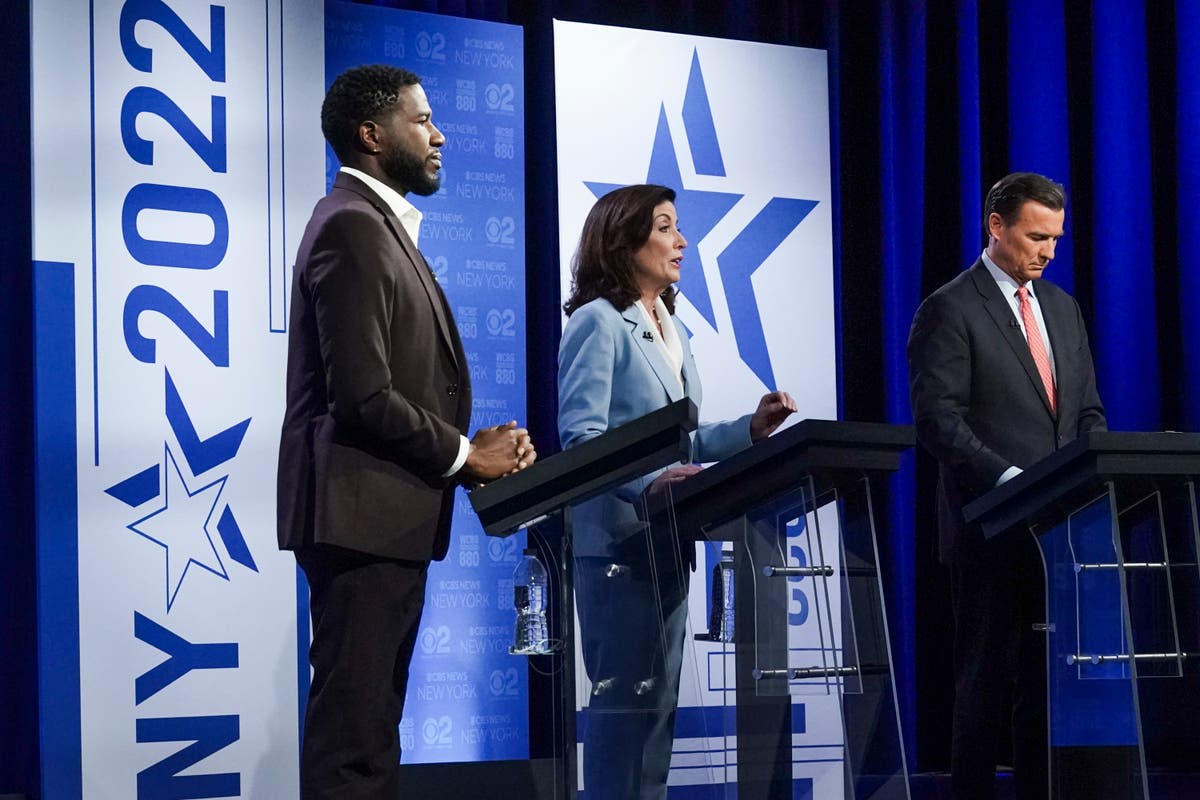 The two Democrats challenging New York Gov. Kathy Hochul‘s bid to keep her job criticized her Tuesday for her past backing from the National Rifle Association and the deal she reached to spend hundreds of millions of taxpayer money on a new stadium for the Buffalo Bills.

Hochul, appearing in her first debate Tuesday night, defended the stadium deal and said her positions on guns had evolved in the 10 years since she got a favorable rating from the NRA while running for reelection in a Republican-heavy New York district.

“That was a decade ago. Judge me by what I’ve done because a lot of people have evolved since I took that position,” she said. “You know what we need? More people to evolve.”

Hochul has been in office for nine and a half months after becoming governor in August when then-Gov. Andrew Cuomo resigned. She is seeking to become the first woman elected to New York’s highest office, but first, she has to win her party’s June 28 primary contest against U.S. Rep. Tom Suozzi of Long Island and New York City’s elected Public Advocate Jumaane Williams.

The governor is considered the frontrunner in the race, not only because she can claim incumbency as someone who currently holds the job, but also because she’s got hefty campaign funds and has stacked up endorsements, including the backing of the state Democratic party.

Suozzi like Hochul, has stuck to mostly centrist positions. Williams is a progressive who in 2018 mounted a strong challenge against Hochul in the lieutenant governor’s race.

Williams, a former city councilman who serves as a public ombudsman, said he had been working to stop gun violence 10 years ago and said he wished Hochul had been supportive then.

“We are 10 years behind because people in Congress were doing the bidding of the NRA,” he said.

Suozzi boasted of having an “F” rating from the NRA and said that while all the candidates on the stage supported the state’s new gun laws, “only one of us standing up here has ever been endorsed by the NRA, taken money from the NRA.”

Hochul, trying to show she acted quickly amid rising gun violence and a mass shooting in Buffalo last month, highlighted a package of gun bills she signed this week that prohibited anyone under 21 from buying a semiautomatic rifle and required microstamping on new firearms, which would leave individual identifiers on bullet casings fired by those guns.

“I’ve been the governor for nine months. I got it done in record time,” she said.

She also defended her plan to spent an eventual $850 million in taxpayer money toward a new stadium for her hometown Buffalo Bills.

The deal has been criticized by Republicans and Democrats for giving so much public money to a private business — in this case, the Buffalo Bills, which are owned by billionaires Terry and Kim Pegula. Good government groups and other critics have also noted there could be a conflict of interest as Hochul’s husband works as a senior vice president and general counsel for the Bills’ concession vendor Delaware North.

Suozzi and Williams both repeated those criticisms early in the debate.

“We need to have someone that’s going to stop the budget and say we need more money for gun violence prevention, not a billionaire to get a stadium to be built outside Buffalo,” Williams said.

Hochul, a Buffalo native and Bills fan, said the stadium deal will create jobs and economically benefit New York. She also said there is no connection her husband’s company and the deal.

“They literally sell beer and hotdogs at the games. They had nothing to do with negotiations,” she said. She added: “I’m proud of his work. His ethics are second to none, as are mine.”

Williams and Suozzi participated in a debate last week in which they criticized Hochul for not participating. Her campaign said she was instead focused on the end of the legislative session.

The trio is scheduled to meet in another debate on June 16 sponsored by WNBC-TV, Telemundo and the Albany Times Union.