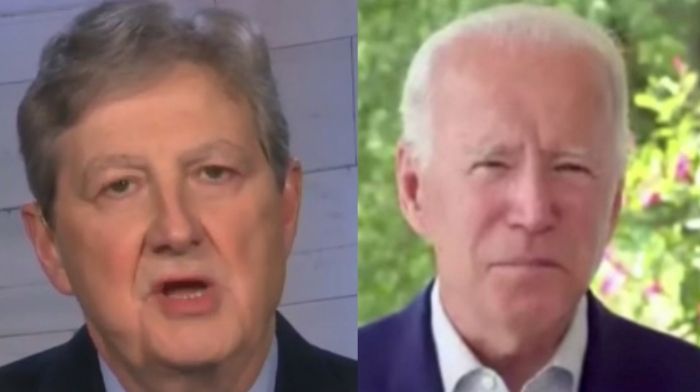 Sen. John Kennedy (R-LA) went on “Fox & Friends” on Monday morning to lash out at President Joe Biden for not doing enough to stop the border crisis that is currently happening at the U.S./Mexico border.

Kennedy went so far as to claim that Biden “just doesn’t care” about the surge of migrants at the border, before warning about how “dangerous” and “expensive” the border crisis is for the United States.

“Sometimes, when people act like they don’t care, it’s not an act. I think President Biden just doesn’t care,” Kennedy said. “I think he plans on admitting between 2 and 3 million illegal immigrants into our country this year. We had hints of that in his campaign.”

“This is dangerous,” he added. “The Border Patrol told me that at least people from 55 countries have already come in. People from all over the world are getting to Mexico and flooding in. Number two, it’s very expensive.”

“Many of these folks will go on welfare, particularly if they can make it to a sanctuary city or a blue state. It puts downward pressure on wages, and it unreservedly undermines illegal immigration, which most Americans support,” Kennedy continued.

Related: President Biden Gets Low Marks For His Handling Of Border Crisis In New Poll

“Now, in further evidence of what I just suggested, the President has put Vice President Harris in charge of trying to combat the illegal immigration,” Kennedy said. “There’s some confusion. She says she doesn’t want it. The President says she’s got to take it.”

“But no disrespect to the Vice President,” he concluded. “I know her well, I respect her, but she believes in open borders. Making her the illegal immigration czar, as I said the other day, is like making El Chapo the drug czar.”

Many have argued that Biden created this border crisis by encouraging illegal aliens to try and cross the border now that he is president.

Despite the fact that it’s clearly a massive crisis, Biden’s White House has often refused to call it that, referring to it as a “border challenge” instead.

This piece was written by James Samson on April 5, 2021. It originally appeared in LifeZette and is used by permission.

Read more at LifeZette:
Biden Poll Numbers Dropping
McCarthy Nails Down Another GOP House Seat
Lindsey Graham Torches Fauci – Says He Should Be Calling For Migration Programs To Be Shut Down