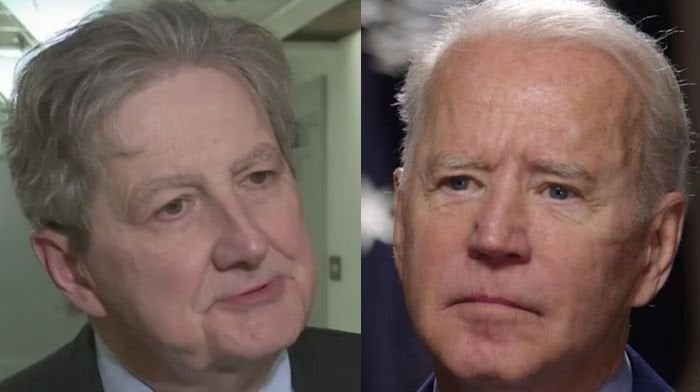 Sen. John Kennedy (R-LA) went on Fox News to accuse President Joe Biden of being dishonest, going so far as to say that the Democrat has a “Ph.D” in lying.

Kennedy specifically accused Biden of “not telling the truth” when he said that Republicans are lying about the Democrats wanting to defund the police.

Related: GOP Sen. Kennedy: Dems Not Wanting Voter ID ‘So Dumb, You Lose Your Place During Sex, Or You Want To Cheat’

Smith responded by asking Kennedy what Biden is lying about.

“About cutting police spending, number one,” Kennedy replied. “If you look at the Democratic Party platform, which he wrote, it talks extensively about reimagining the police.”

“Among President Biden’s most ardent supporters are the Democratic mayors of most large cities — New York, Chicago, L.A., San Francisco, Seattle, Portland — they’ve all cut police spending,” he added. “They’ve all talked about doing it. President Biden has appeared with them many times and said what a great job they’re doing. He certainly hasn’t discouraged them.”

Biden’s Comments On ‘Defund The Police’

During a CNN Town Hall on Wednesday night, Biden claims that the Democratic Party is not “anti-police” and that Republicans are lying when they say it is, according to The Daily Caller.

“I’ve never said defund the police,” he added. “I don’t know any communities, particularly communities that are in the most need, and the poorest, and the most at-risk that don’t want police. They want police, though, to look at them as equals.”

Don Lemon: “How do you respond to Republicans who try to paint you and your party as anti-police?”

This piece was written by James Samson on July 22, 2021. It originally appeared in LifeZette and is used by permission.