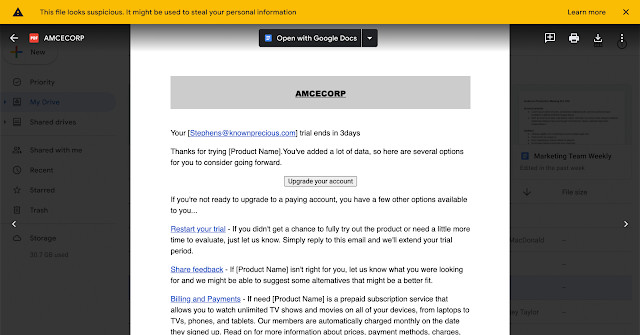 Google’s office collaboration tools Docs, Sheets, Slides, and Drawings will now show a warning banner when you open potentially malicious files from the web, the search giant has announced. This banner already appears when dodgy files are accessed from within Drive, as well as from suspicious links within separate Docs, Sheets, Slides, and Drawings files. The broader rollout should help protect users in a wider range of situations.

The warning banners appear to be an attempt to combat scams that use Google’s office productivity software to create a veneer of authenticity around dodgy links and phishing attempts. In 2020, Wired reported on a wave of scams that were using Google’s various sharing and collaboration features to get their malicious files in front of unsuspecting users. Clicking a link in one of these documents sends a user to a site filled with dodgy ads, or a typical phishing site asking them to enter bank or other account details.

Google’s announcement says that the new warning banner is rolling out over the next couple of weeks to all accounts, business and personal alike.

Behind the expert testimony in the ‘Fitbit murder’ trial