Germany’s government fears Russia could take advantage of annual maintenance on its main export pipeline to shut off gas supplies to the country completely, increasing the risk of a winter energy crisis in Europe’s largest economy.

Earlier this month Russia cut the flow of gas through Nord Stream 1 by 60 per cent. The pipeline, one of the main conduits for Russian gas into Europe, will be shut down for around two weeks from mid-July for annual summer work on it.

“The supply situation is tight enough without NS1 being shut down,” said one.

Carsten Rolle of the BDI, Germany’s business confederation, said that during previous periods of scheduled maintenance on NS1 Gazprom had made up the shortfall by sending Germany more gas through Ukraine, or via the Yamal-Europe pipeline through Poland.

“But there is a concern that they will not do that this year,” he said. “Already they have cut flows through NS1 by 60 per cent and not made up for it with increased flows through other pipelines.”

“The conclusion you’re left with is that this is a hostile act,” said Timm Kehler, head of trade body Zukunft Gas.

Markus Krebber, chief executive of German energy company RWE, said it was “very clear” that the decision to reduce gas flows was “political”, “because it’s not only the [gas] coming via Nord Stream 1 that [is] below contracted volumes, but also via other pipelines.”

Rolle said Gazprom could also use the planned maintenance on NS1 “as a pretext to stop gas supplies for much longer, citing various technical reasons”.

“What is the guarantee that at the end of the maintenance period that you actually do get any gas coming back on?” said James Waddell, an analyst at Energy Aspects.

The fears about NS1 come amid a growing realisation in Berlin and other European capitals that Russia is weaponising its energy exports in retaliation for EU sanctions over the war in Ukraine.

Habeck said he could not rule out a further squeeze on gas deliveries. “Given the current situation, we must assume that Putin is ready to reduce the gas flow further,” he said on Wednesday.

So far, the reduction in flows has had little tangible impact on Germany’s supplies because gas consumption during the summer is only a quarter or a fifth of the volume on cold winter days. But it is having a serious effect on efforts to fill gas storage facilities ahead of the winter heating season.

Gas storage is currently 58 per cent full and the government wants that to rise to 90 per cent by November 1. But owing to the problems with NS1, gas importers are being forced to buy the missing volumes on the spot market at much higher prices. 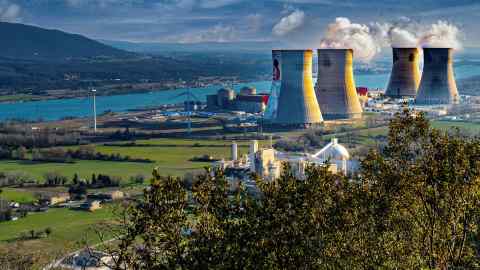 They will come under even greater pressure if the flow of gas through NS1 and other pipelines is completely shut off for long periods over the summer.

“If we don’t succeed in filling gas storage by the autumn, we’re going to quickly start experiencing gas shortages,” said Jörg Rothermel, head of energy at Germany’s Chemical Industry Association. “And the Bundesnetzagentur [federal energy regulator] will have to start issuing orders for companies to reduce their gas consumption or even switch off some production facilities.”

“Russia seems to want to show Europe that it won’t succeed in filling its gas storage,” said Kehler. “My feeling is that it is trying to torpedo Europe’s goal of getting gas storage levels to 90 per cent by November 1, and so weaken Europe politically.”

A spokesperson for the German economy ministry said the government was in “close contact with gas traders who are preparing for this date”, referring to the start of maintenance work on NS1 on July 11.

She said Germany was also “liaising closely with our European partners because we know that gas supplies to France, Italy and Austria have also been reduced”.