A KNIFEMAN went on a rampage stabbing four people before he was tackled by a hero bystander using his crutches.

Terrified people – including mums and their kids – fled for their lives as they were chased by a man with a “big knife” during the horror attack in Auckland, New Zealand.

Superintendent Naila Hassan said that four members of the public were stabbed in the “random” attacks.

By-standers who stepped in, including someone using a crutch, had “acted with bravery” to tackle the man with “quite a large knife”, she said.

Police said the incident unfolded about 11.18am, when the man stabbed the occupant of a property.

He then headed towards the beach in the North Shore area, where he stabbed three people near a bus stop. 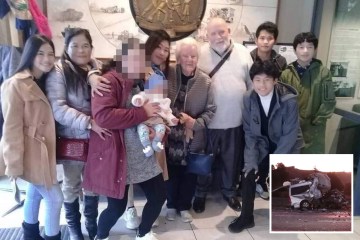 One woman said she had to run screaming and calling for help after the man chased her.

“I was wearing headphones and went to take the headphones off to talk to him because that’s what I thought he wanted,” she told the New Zealand Herald.

But there was something about the man that put her on edge and then “he just started running at me”, she said.

Dianne Hilbourne was with her three-year-old boy and a group of other mums on the beach when a woman told them to take their kids and run.

“Then another man came and he had a big stick and he was quite panicked and he said ‘just grab your kids’ and run as fast as you can down the beach,” she told Stuff.

“So we just grabbed our kids and left everything behind and ran for it.

“It was really scary, the kids were really upset and they were all crying and screaming.”

One witness said a construction worker used his crutches to stop the hoodie wearing knifeman.

The attacker chased after a 17-year-old girl who screamed, she said.

The witness said that initially “we thought she was being silly, she was shrieking”.

But then “he stabbed two people, totally random … it all happened very quickly”.

The man was injured when he was tackled and was now under police guard at North Shore Hospital, said Supt Hassan.

She said the incident was not being treated as a hate crime.

The Battle for Kharkiv: How Ukraine’s second city was recaptured from Russian forces