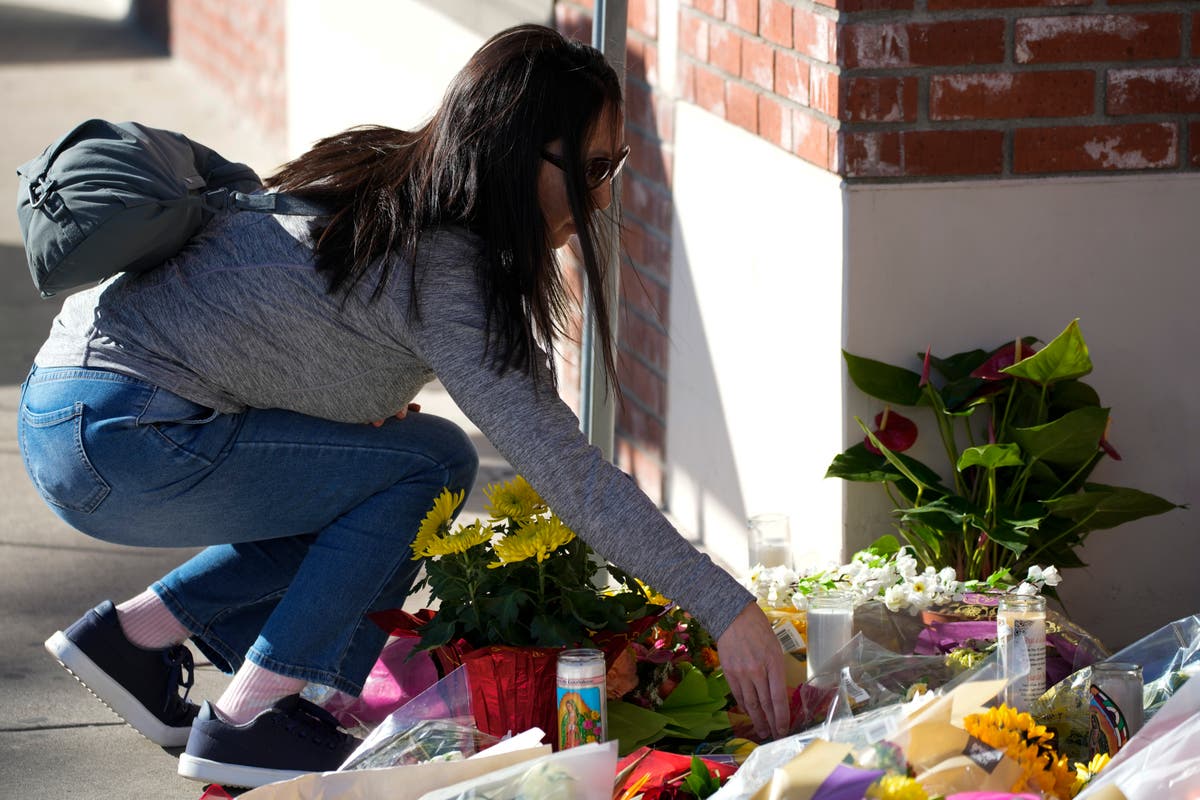 It is a wave of shocking gun violence that has seen 19 people on the West Coast killed in a string of shootings over the last four days.

California’s reputation as a leading state for gun safety has been shattered by three mass shootings since Saturday night alone.

The state, which the CDC says has the 44th lowest gun death rate in the country, is reeling from the shootings in Monterey Park, Half Moon Bay and Oakland.

And police in Washington state were hunting a gunman on Tuesday who randomly shot dead three people outside a convenience store in the city of Yakima.

Here is everything we know s far about the shootings that have devastated communities across the region in the past few days.

Gunman Huu Can Tran, 72, killed 11 people and wounded nine others in a shooting at a dance studio in Monterey Park, California, on Saturday.

After the shooting at the Star Ballroom Dance Studio, where the city’s large Asian American community was celebrating Lunar New Year weekend, he drove to another nearby dance hall, the Lai Lai Ballroom and Studio in Alhambra.

It was here that a man identified as 26-year-old Brandon Tsay – whose family runs the establishment – wrested a modified 9mm submachine gun-style semi-automatic weapon away from him, Los Angeles County Sheriff Robert Luna said.

Tran was later pronounced dead after he died by suicide in his van as law enforcement surrounded the vehicle. A handgun was recovered from the van, which matched descriptions of the vehicle he used to get away from the dance studio, said reports.

All of the deceased from Saturday’s shooting at the Star Dance Studio have now been identified, according to The Los Angeles Times.

Diana Tom, 70, passed away from her injuries in hospital.

In the wake of the shooting, Governor Gavin Newsom called the Second Amendment, which the Supreme Court has ruled protects private gun ownership, “a suicide pact.”

“This Second Amendment’s becoming a suicide pact, it feels like,” Gov. Gavin Newsom tells @NorahODonnell in Monterey Park. “California’s 37% lower than the death rate of the rest of the nation, and yet, with all that evidence, no one on the other side seems to give a damn.” pic.twitter.com/tSz7oawXtR

“California’s 37 per cent lower than the death rate of the rest of the nation, and yet, with all that evidence, no one on the other side seems to give a damn,” he told CBS News.

A mushroom farm worker was arrested for killing seven coworkers in a mass shooting in Half Moon Bay in Northern California.

Chunli Zhao, 67, worked for decades at one of the two agricultural business sites where the shooting unfolded on Monday afternoon.

He was arrested soon after when he was spotted sitting in his car outside a local sheriff’s office. Video showed officers wrestling him to the ground and placing him in handcuffs.

The alleged gunman shot dead four victims and wounded a fifth at the Mountain Mushroom Farm, and fatally shot another three victims at the Rice Trucking-Soil Farm located around two miles away, according to authorities. The eighth victim was airlifted to hospital.

Investigators are still working to determine which shooting took place first, as well as the motives for the killings.

At the hospital meeting with victims of a mass shooting when I get pulled away to be briefed about another shooting. This time in Half Moon Bay.

Mr Newsom took to Twitter to say he was visiting hospitalised victims of the Monterey Park shooting when he learned of the Half Moon Bay attack.

A teenager was killed and seven other victims injured in a shooting rampage at a gas station in Oakland.

The shooting unfolded just after 6pm on Monday at a Valera gas station along Seminary Avenue and Macarthur Blvd, according to the Oakland Police Department (OPD).

Law enforcement responded to the scene after being alerted to a shooting through ShotSpotter activity.

When officers arrived at the gas station, there were no victims in sight – but shell casings left behind indicated what had unfolded.

“Upon arrival, [officers] located shooting scene, they located casings, but no victims,” said OPD’s Kim Armstead in a press conference on Monday night.

At least eight people were shot in the incident, with one victim – identified by his family as 18-year-old Mario Navarro – killed.

The seven others were in stable condition and are expected to survive.

Three people were killed in a “random” Washington state convenience store shooting and the suspect remains on the loose in the latest in a string of US gun attacks.

Police in Yakima, Washington, say that the suspect, who they have named as Jarid Haddock, 21, first pulled into an ARCO/ampm gas station in the city and “tried to get into the lobby,” but the doors were locked.

“As he’s walking into the store he pulls out his gun and there are two people getting food and he shoots them,” said Yakima Police Chief Matt Murray.

The suspect then walked out of the store and fatally shot another person. Police say the man then walked back across the street to the gas station shot into another car and drove off.

“Presumed homicide suspect is Jarid Haddock, a 21-yr-old, Yakima County resident. If seen, call 911 immediately, do not approach. The suspect is considered armed and dangerous. YPD and local agencies are following up on leads,” Yakima Police Department posted to Facebook on Tuesday morning.