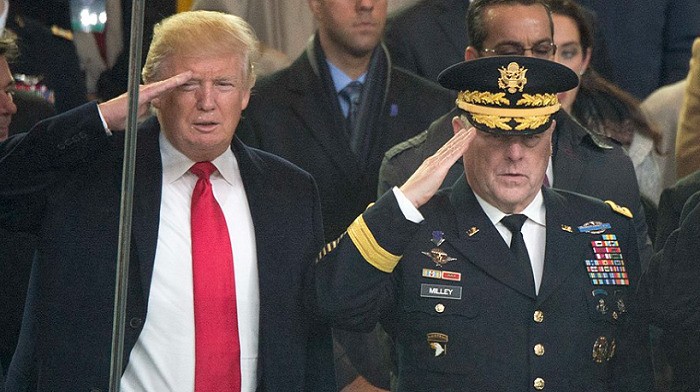 Former acting United States Secretary of Sefense under Donald Trump, Christopher Miller, denies ever authorizing General Mark Milley to speak with China and calls for him to resign.

Miller, who led the Pentagon from just days after the 2020 election through President Biden’s Inauguration Day, called Milley’s actions an “unprecedented act of insubordination by the Nation’s top military officer.”

Milley, currently serving as Chair of the Joint Chiefs of Staff, has been accused by multiple sources of having phoned General Li Zuocheng of the People’s Liberation Army of China on at least two occasions to assure them the United States would not launch a military strike.

He is reported to have done so due to concerns for then-President Trump’s mental state.

One such call took place after the Capitol riot on January 6th when Miller was the acting Defense Secretary.

“In response, Milley took extraordinary action, and called a secret meeting in his Pentagon office on January 8 to review the process for military action, including launching nuclear weapons,” authors of a new book titled Peril, claim.

At the end of the meeting, he made the officers “verbally confirm they understood” while looking each in the eye.

Perhaps most astonishing is a quote provided by the Washington Post which shows Milley was willing to warn China if an attack was in the works.

“General Li, you and I have known each other for now five years. If we’re going to attack, I’m going to call you ahead of time,” Milley purportedly said in a separate call just before the election. “It’s not going to be a surprise.”

And reports have surfaced that former Secretary of Defense Mark Esper himself sought to create a “backchannel” message to reassure China the United States would not be seeking military action in the days leading up to the 2020 presidential election.

That said, Christopher Miller says he never authorized Milley to make a phone call to his Chinese counterpart after the Capitol riot, and certainly wouldn’t insert him into the chain of command.

“The Chairman of the Joint Chiefs of Staff is the highest-ranking military officer whose sole role is providing military-specific advice to the president, and by law is prohibited from exercising executive authority to command forces,” Miller said in a statement to Fox News.

“The chain of command runs from the President to the Secretary of Defense, not through the Chairman.”

RELATED: Trump: ‘Dumbass’ General Milley Should Be Tried For Treason if China Story Is True

Miller would go on to state that, if the allegations against Mark Milley are true, then he must resign over the calls to China.

“If the reporting in Woodward’s book is accurate, it represents a disgraceful and unprecedented act of insubordination by the Nation’s top military officer,” Miller said.

He would add that if Milley’s “histrionic outbursts and unsanctioned, anti-Constitutional involvement in foreign policy prove true, he must resign immediately or be fired by the Secretary of Defense to guarantee the sanctity of the officer corps.”

Trump said “Milley never told me about calls being made to China” and that “he put our country in a very dangerous position” with his actions.

Some have called those actions tantamount to treason explaining Milley’s comments could have very easily prompted China, perhaps now fearful that America’s top military officer thought President Trump was so unhinged he could greenlight an attack, to launch their own military action against America first.

He could have started an actual war between nuclear powers.

Milley was also suggesting he’d give information about United States military action to the enemy.

Trump believes the only reason Milley would escape being forced to resign or worse is because of his role in helping President Biden keep quiet about the tragic withdrawal from Afghanistan.

“The only reason Biden will not fire or court-martial Milley is because he doesn’t want him spilling the dirty secrets on Biden’s deadly disaster in Afghanistan,” the former President said.

Now is the time to support and share the sources you trust.
The Political Insider ranks #15 on Feedspot’s “Top 70 Conservative Political Blogs, Websites & Influencers in 2021.”

Kids And Other Adorable Family At The Hip Hop Awards