Kia Joorabchian, football agent to Philippe Coutinho and previously Carlos Tevez, is placing his faith in young talent as he bids to score at the highest level at Royal Ascot next week.

His Amo Racing ownership outfit has enjoyed a stellar start to the season, with exciting two-year-old Persian Force lighting up the track and looks to have a leading chance at the Royal meeting in the Coventry Stakes.

This comes after a remarkable 2021 that included a second in The Derby with Mojo Star and Group Two victory in Ireland with Go Bears Go, who has returned this time around for hot training prospect David Loughnane, and looks to have his three-year-old set for a big run in the Commonwealth Cup on Friday.

Loughnane is one of several young trainers who have benefitted from the Amo Racing setup, where like in football, Joorabchian has placed his faith in plenty of up-and-coming talent, with the likes of George Boughey and Alice Haynes both training for the agent.

And this policy is something that, now he has established himself in the sport as an owner, he is keen to do more of in order to help the careers of young trainers on the way to bigger successes.

“I think throughout my sporting career, I always like to look for young talent and spot young talent,” Joorabchian told Sky Sports Racing.

“In the case of racing, I started with some very established trainers which I very much admire and I like very much.

“I just like to find the young talent and give them a chance because I think a lot of people don’t quite give chances to young people these days to be able to compete at the top table.

“I think some of them are just as good as the guys at the top but they just haven’t had the chance.

“Hopefully a few of these young trainers will really start to propel as they have actually.”

One of the aforementioned trainers, Alice Haynes, has guided Remarkable Force to two wins from as many starts, and looks to have fallen under the radar as a potential Coventry contender, given the profile of the exciting Persian Force in the same colours.

“Alice has done a fantastic job for us,” he said. “She’s a very young trainer – I remember meeting her for the first time in Newmarket and I think she had two or three horses.

“Robson [Aguiar] was very keen to give her some horses and we’ve never looked back.

“She’s done a very good job with Mr Professor and we won the Listed race with him and he’s taking a break because he had a heavy-duty winter going to Dubai and coming back.

“He’s gone under the radar a little bit because of some of the big-name horses but he’s won two from two, he’s a tough, steady horse and we have a lot of hope for him in the future.

“He’ll go to the Coventry.”

‘It feels like I’ve been in with Mike Tyson!’

One horse that is giving the football agent sleepless nights is Go Bears Go, who was an exceptional two-year-old for David Loughnane before returning with victory at Ascot on Trials Day.

However, his final preparation didn’t go to plan, slipping out of the gates at Haydock in the Sandy Lane Stakes before eventually finishing fourth.

But even with that run in mind, Joorabchian maintained that he must go to the Royal meeting with a favourite’s chance of landing the six-furlong Group One.

“About a week before the meeting, we find it very hard to sleep at night. After the meeting, I normally feel like I’ve been in a couple of rounds with Mike Tyson! 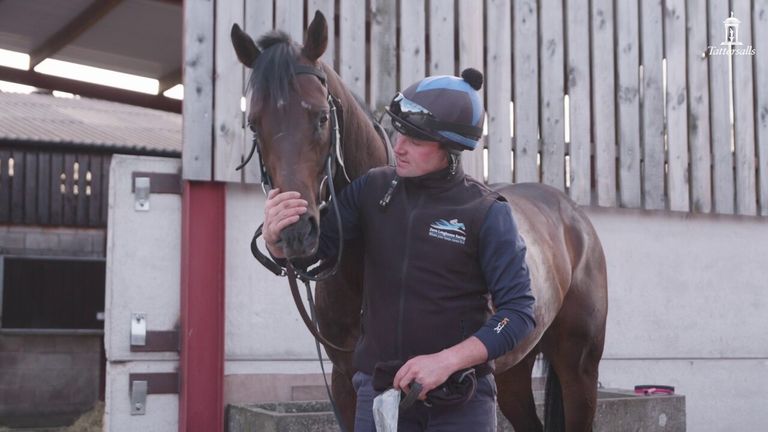 Trainer David Loughnane says Go Bears Go’s preparation for the Commonwealth Cup at Royal Ascot has all gone smoothly as he aims to bounce back from defeat in the Sandy Lane Stakes. Pictures: Tattersalls.

“He [Go Bears Go] was really unfortunate last year in the Norfolk [Stakes]. We hit the line with him and Perfect Power just caught him. For us, he’s been a fantastic horse.

“He gave us a great ride in the Breeders’ Cup – he missed the start, was five or six lengths back and still managed to finish second.

“The week after Ascot, he went and won the Railway. He had a very unfortunate slip in his last race – he has a very live chance.”