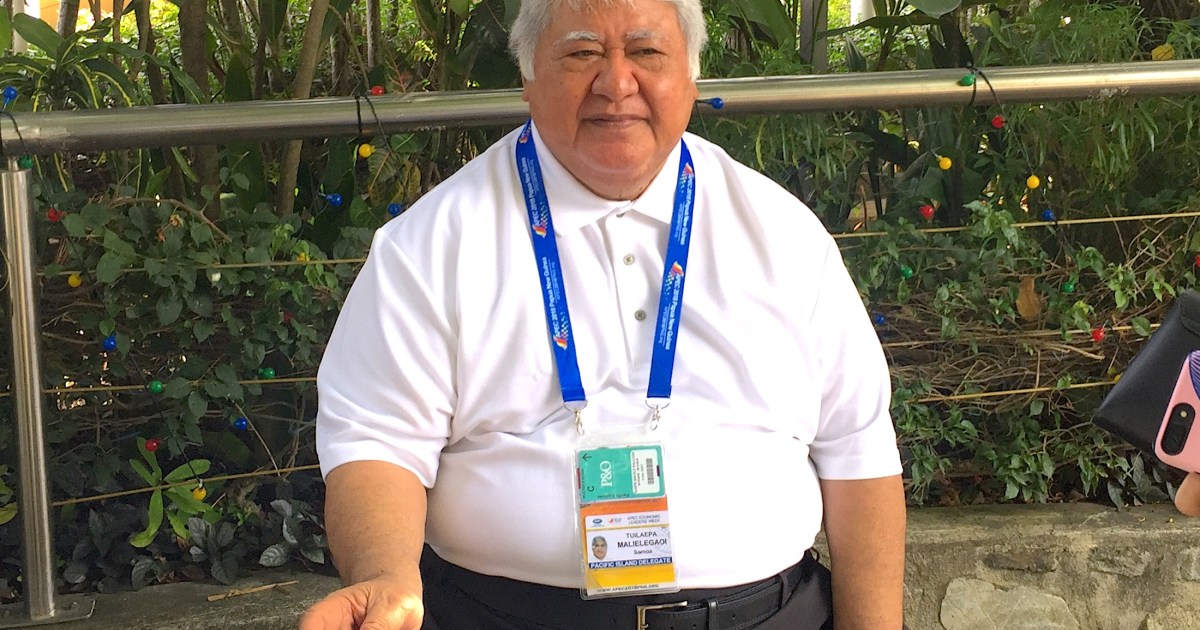 A fierce contest for power is playing out in the small Polynesian nation of Samoa ahead of its next general election on April 9.

Election outcomes in the central Pacific Island nation of about 199,000 people, located northeast of Fiji, have, for more than 20 years, been predictable.  With little opposition, Prime Minister Tuilaepa Sailele Malielegaoi has led the Human Rights Protection Party (HRPP) to victory at every five-year vote since 1998. The party itself has been in government for nearly 40 years.

Malielegaoi, now 75 years old, has held power for 23 years and is one of the longest-serving leaders in the region and the world.

But this time, impassioned opposition has emerged with new parties and candidates who are intent on change at the top.

“Thinking back to 2011 and 2016, it’s a different mood this time around,” said Renate Rivers, an editor at the local newspaper, Samoa Observer.

“We’re finding that a lot more people are feeling emboldened to speak openly about policies or candidates they do or don’t support. Samoa also hasn’t had an official opposition party for five years, so it has definitely felt like an awakening for many people who have realised that they actually do have other options for the upcoming election,” she told Al Jazeera.

The leader of FAST is former Deputy Prime Minister Fiame Naomi Mata’afa who resigned from the government and HRPP, of which she was a member for more than 30 years, last September.

Her defection, following her rejection of controversial new legislation which she believes will worsen corruption, preceded a heated public exchange with Malielegaoi, in which he accused her of treason and she denounced the ruling party for abuses of power.

‘Not getting any better’

“HRPP has had its time for the past 40 years. With a population of less than 200,000 people, we should have at least a decent way of living, given we have a foreign debt of $1.2bn, but the country is not getting any better under HRPP’s watch,” a spokesperson for FAST told Al Jazeera. We’ve had 100 people die due to the government’s carelessness and ineptitude in handling the measles epidemic in 2019. Corruption is rife with major contracts awarded to companies closely related to cabinet ministers, and nepotism, as we have a prime minister and his son as the head of finance and his son-in-law as the chief auditor.”

Samoa, a former German colony, was occupied and then administered by New Zealand from 1914 until it achieved independence in 1962.

It is a parliamentary democracy, although modern political leadership is firmly linked to the “matais”, the country’s Indigenous clan chiefs who wield immense power over the realms of family welfare, land, property, religion and politics. Until 1990, only matais could vote and stand as electoral candidates. Candidates for the majority of the 51 seat Legislative Assembly must still hold a matai title, but, late last century, voting was extended to all citizens aged 21 years and over.

On Friday, 128,848 voters go to the polls to choose from a field of 189 candidates, of which more than 20 are women. The HRPP, which holds the majority of parliamentary seats, has the most candidates at 105. The FAST coalition is next with 52, while other parties, such as the Tatua Samoa Party and Samoa First Party have 14 and 5 respectively.

The ruling party’s promises include more infrastructure development and it is competing with the FAST coalition on pledges to improve educational outcomes and hospital services. Malielegaoi is convinced of his victory again this year but Rivers, the journalist, believes the party is relying on “the voting public’s gratitude for the work done since they came into power”.

This includes changing road use in the island state from right to left in 2009 and shifting the international date line in 2011 to boost the economy and trade with Australasia and Asia. In the same year, it was instrumental in increasing sub-regional cooperation with the founding of the Polynesian Leaders Group.

The HRPP was approached for comment on the election but did not respond.

Important issues for voters are likely to include employment and the pandemic.

“Samoa is struggling economically because of the COVID-19 pandemic. The country is now in a recession and border closures have put a stop to tourism earnings, and also slowed down our seasonal employment arrangements. On the ground, many small businesses are struggling to stay afloat,” Rivers said.

Samoa has a gross domestic product or GDP of $4,324 per capita, a rate that is relatively high for the region. But prior to the pandemic, an estimated 20.3 percent of the population lived below the national poverty line and the unemployment rate was about 14.5 percent, according to the World Bank.

Another hot issue is likely to be the government’s controversial passing last year of the new Land and Titles Court, Constitution Amendment and Judicature Bills. Critics claim these laws grant too much power to the executive and by elevating the power of a new Land and Titles Court, which prioritises customary law, weakens the Supreme Court’s ability to challenge abuses of power.

Mata’afa, acting in accordance with the views of her electorate, Lotofaga, rejected all three last year.

The FAST Party is now making a promise “to restore and uphold the rule of law as the previous government and HRPP had dismantled the justice system by establishing two separate courts that undermine the role of the Supreme Court and the independence of the judiciary,” according to its spokesperson.

Voter turnout is likely to be high, given the stakes but other factors will influence behaviour at the ballot box, such as family allegiances and support of the diaspora.

“In Samoan politics, you have generally pretty small constituencies where voters know candidates because they’re family members, or part of the same church or village, so these personal connections tend to be a lot more important than party policy,” said Kerryn Baker, a fellow in Pacific politics at the Australian National University’s Department of Pacific Affairs.

The very large diaspora, which is estimated at more than half the country’s resident population, could exert considerable pressure too.

Rivers said that many Samoans living in Australia, New Zealand and the United States are opposition supporters. “They have financed much of the opposition’s campaign and unleashed a social media campaign that has been very successful in countering the ruling party’s rhetoric,” she said.

The return of writs for the next 17th Parliament of Samoa are due on the April 23.