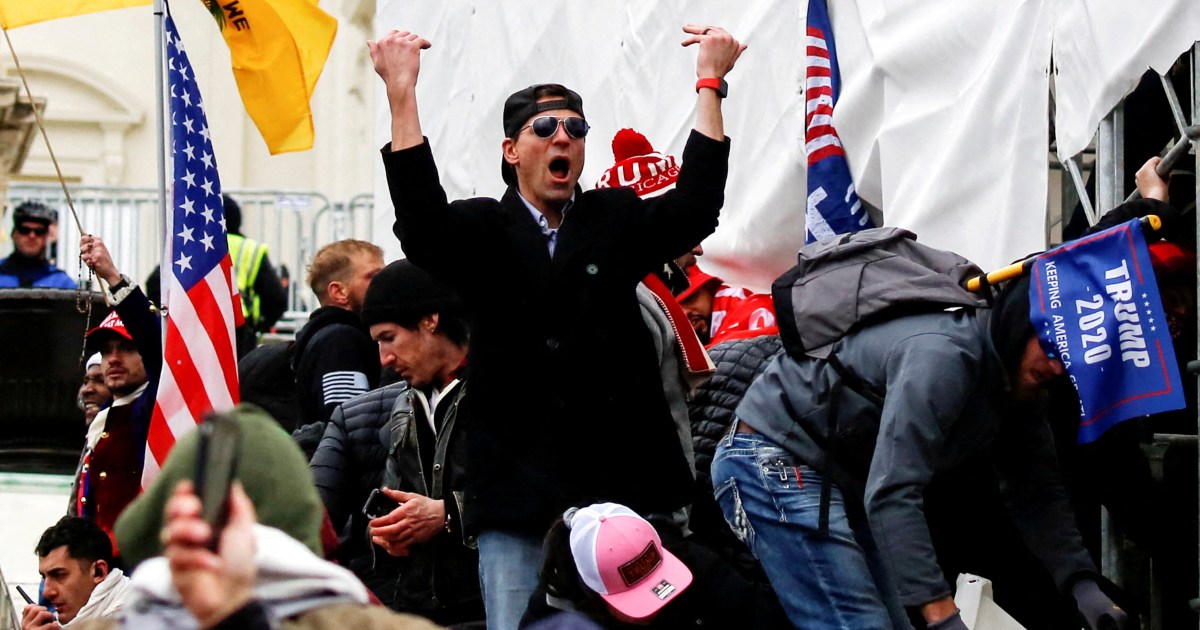 Republican Ryan Kelley charged with misdemeanors in connection to January 6 events amid continuing investigations and hearings.

The FBI arrested a Republican gubernatorial candidate for Michigan and has charged him with misdemeanours in connection with the US Capitol riot by supporters of now-former President Donald Trump.

Ryan Kelley, 40, was arrested in western Michigan on Thursday and appeared at a brief hearing in federal court in Grand Rapids, where he was released from custody without posting bail. The government did not ask that Kelley be detained.

His arrest came hours before the House committee investigating the riot held a widely anticipated public hearing, showing never-seen video, audio and an array of evidence highlighting the deadly violence that erupted on January 6, 2021.

Federal investigators said Kelley was recorded on video outside the US Capitol on the day of the riot, repeatedly waving to the crowd and directing them towards stairs leading into the building.

He used his phone to “film the crowd assaulting and pushing past US Capitol police officers” and was in a crowd that climbed stairs to a Capitol entrance after causing police to retreat, the FBI said.

Kelley’s campaign posted on Facebook two words: “political prisoner,” and the chairman of the state GOP accused Democrats of “weaponising our justice system” against political opponents.

Kelley has long acknowledged that he was at the riot but said that he did not go inside the Capitol.

He is one of more than 840 people charged so far in connection with the attack, as US authorities continue to level charges in an investigation.

Kelley faces up to one year in prison or a fine of $100,000. So far, more than 300 people have pleaded guilty to charges over the riot, largely to misdemeanour offences punishable by no more than one year in prison. Some who have pleaded guilty to misdemeanours have been sentenced to short stints behind bars while others have been sentenced to home confinement or probation.

According to a tally by the Democratic Legislative Campaign Committee, at least 18 Republican state legislators who attended the January 6 rally currently hold office.

Kelley is one of five people seeking the Republican nomination to challenge Democratic Governor Gretchen Whitmer in the upcoming November election.

Even though the race for the spot remains uncertain, with 49 percent of Republican voters still undecided, Kelley emerged as the leading Republican candidate in a recent opinion poll cited by local media in Michigan.

The primary vote to select a Republican nominee is scheduled for August 2.

Defence lawyer Heath Lynch said Kelley “has every intention of continuing his campaign in earnest”.

Michigan Democrats criticised the Republican candidate, saying Kelly has “no business seeking an elected position in the same government he tried to overthrow.”

Meanwhile, the chairman of the Michigan Republican Party, Ron Weiser, said that Democrats are weaponising the justice system in an “unprecedented way”.

“It’s shameful and must end,” he said.