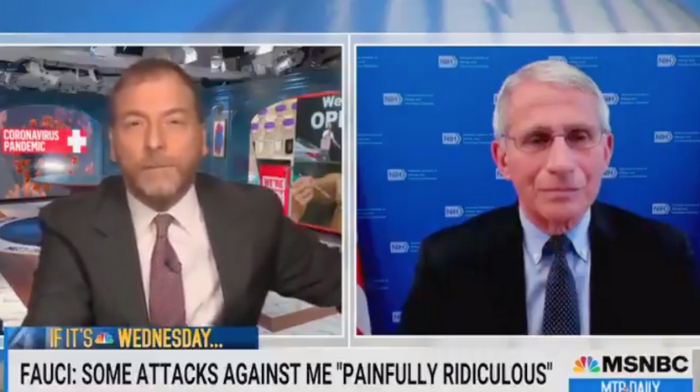 The White House’s top doctor Anthony Fauci recently said that critics who attack him are actually attacking science itself.

Fauci made his remarks during an appearance on MSNBC’s “Meet the Press Daily” with Chuck Todd, saying, “Attacks on me, quite frankly, are attacks on science.”

The attacks on Fauci aren’t an attack on science

They are an attack on hiding behind science to lie by omission pic.twitter.com/QWFj4Sl05x

Fauci Says ‘Attacks’ On Him Are ‘Very Dangerous’

Speaking of the uptick in criticism of Fauci, including calls for his ouster, Todd asked, “What is your level of concern that we’re going to discredit public health officials to the point of — look at Russia, they actually have a good vaccine, and none of their citizens take it because they don’t trust their own government.”

Fauci took the opportunity to blast his critics, in the wake of his public emails being released under the Freedom of Information Act.

Fauci replied, “It’s very dangerous, Chuck, because a lot of what you’re seeing as attacks on me quite frankly are attacks on science because all of the things I have spoken about from the very beginning have been fundamentally based on science.”

Fauci continued, “Sometimes those things were inconvenient truths for people, and there was pushback against me.”

Amid the recent exposure of Fauci’s emails, Fauci claims that the attacks on him are “really very much an attack on science.”

Anthony Fauci is not a scientist. He’s just another bureaucrat in Washington, D.C.

Fauci: ‘Science And The Truth Are Being Attacked’

“So if you are trying to get at me as a public health official and a scientist, you’re really attacking not only Dr. Anthony Fauci, you’re attacking science. And anybody that looks at what is going on, clearly sees that, you have to be asleep not to see that,” he said.

“That is what going on,” Fauci emphasized.

Fauci then said sternly, “Science and the truth are being attacked.”

Dr. Fauci has had many critics at various times throughout the pandemic, who have pointed out that at first, he recommended not wearing masks. He then later recommended masks.

At one point, he said wearing two masks was just “common sense.”

Of the so-called Wuhan lab leak hypothesis, Fauci said, “You want to keep an open mind. It’s a possibility. I believe it’s a highly unlikely possibility, and I believe that the most important one, that you look at what scientists feel, is very likely that it was a natural origin.”

I’ve had enough of this. Science itself is threatened when scientists cannot admit being wrong.

There is nothing wrong with being wrong. There is something wrong with not admitting it. Remember the “please don’t wear masks” message? I certainly do.https://t.co/jvYW4mp3Pt

Fauci was also originally very dismissive of the theory that COVID-19’s origins were from a leak in a Chinese lab in Wuhan. He later said he was open to the idea that it might have come from a lab.

Fauci’s private emails released under the Freedom of Information Act at the request of Buzzfeed have been a flashpoint for his critics.