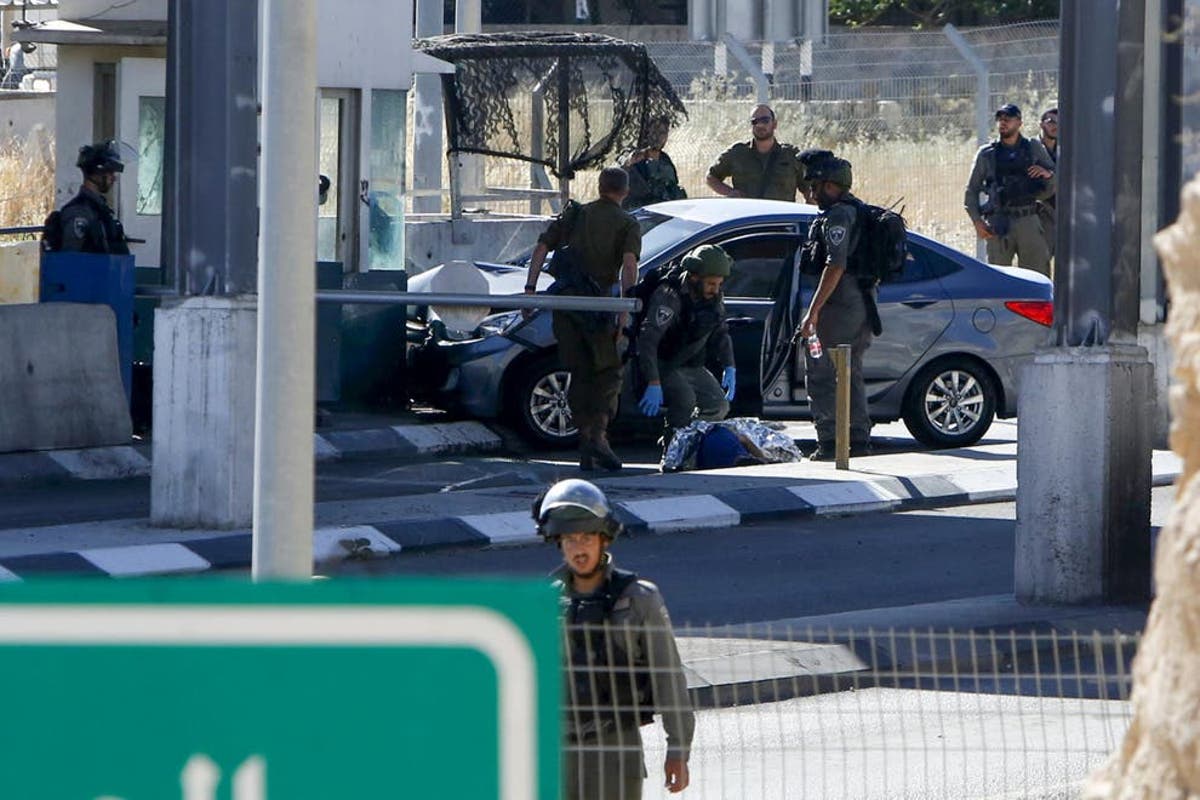 The family of a Palestinian man shot dead by Israeli forces has urged the international community to help secure the release of his body held for eight months by Israel, as a new investigation has found that he posed no immediate threat to security forces when he was killed and was offered no medical aid.

Ahmed Erekat, 27, nephew of the late Palestinian negotiator Saeb Erekat, was killed by Israeli forces on 23 June after he crashed his car into an Israeli checkpoint in the occupied West Bank, lightly injuring an Israeli soldier.

Security camera footage released by the Israelis at the time showed his car approaching the “container” checkpoint and swerving to the right, hitting the group.

The family maintains he was helping with preparations for his sister’s wedding that was due to take place later that day and lost control of the car.

An Israeli investigation into the incident found that it was a “pre-planned and deliberate ramming attack against Israeli police forces”.

But rights groups say the killing was likely unlawful as Erekat no longer appeared to pose an imminent threat to life at the moment he was shot.

Now a new investigation by Forensic Architecture, a research group based at Goldsmiths, University of London, has raised further questions about the authorities’ version of events. Based on video analysis and 3D modelling, the investigators say that Erekat did not accelerate towards the police but showed signs of braking before impact. They found that he emerged from his car and was walking backwards with his hands in the air when he was shot six times, and did not receive medical care despite showing signs of being alive in footage taken from the scene.

The final part of the report concludes that after the shooting, his body lay naked on the ground surrounded by Israeli police and military personnel, which its authors say could amount to deliberate mistreatment of a body, again in violation of international humanitarian law.

The Israeli authorities have vehemently denied the accusations and maintain the incident was a deliberate attack on the checkpoint.  The Israeli embassy in London said in a statement that Erekat was examined at the scene of the incident by medics a few minutes following the attack and was found to have no pulse or breathing. “Therefore no resuscitation procedures were performed on the spot, and his death was pronounced accordingly.

“During the entire incident there was no degrading treatment or infringement of the dignity of the deceased,” the statement read.

The embassy would not comment on the fact that Israel continues to withhold his body, as there is an ongoing Supreme Court case in the matter.

Withholding of the body is an action which rights groups say is “cruel” and a violation of international law.

The Extrajudicial Execution of Ahmad Erekat from Forensic Architecture on Vimeo.

Erekat’s father Mustafa told The Independent the family was being collectively punished as eight months on they are unable to bury and properly mourn him.

“I cannot describe the feeling. No human being can imagine what it is like not to be able to bury a loved one unless they have been through it themselves,” Mustafa said, speaking from his home in Abu Dis in the West Bank.

“The Israeli minister [in charge] says he won’t give us back Ahmed’s body. I call on the UK to intervene, I just want to bury my son. I do not want anything else,” he added.

The Israeli authorities told The Independent their investigations found that Erekat’s car slowed and waited before turning 90 degrees, accelerating and ramming down the police officer. “[His] behaviour caused the police officers at the scene to feel that their lives were in danger,” a statement from the embassy read, adding that similar ramming attacks have resulted in the deaths of Israelis in the past.

“The police officers responded professionally and acted according to procedure.”

However Forensic Architecture say that based on their spatial analysis of the video released by the security forces, Erekat’s car did not speed up but was at constant acceleration despite a sharp slope at the checkpoint, implying that he was braking before impact.

They say their analysis also contradicts the army’s claim that he “got out of the car and approached officers, who responded by shooting”, saying the video showed he exited the vehicle unarmed, his hands raised in the air, and that he was moving away from the soldiers and posing no immediate threat when he was shot.

The researchers say a review of videos of the aftermath of the incident, along with witness testimony, shows he was denied medical assistance, while Palestinian medical teams were refused access to the site.

Erekat’s father Mustafa said he arrived on the scene and was prevented from seeing his son by soldiers.

The lead Israel/Palestine researcher said: “It speaks to an ongoing pattern of behaviour by the Israeli army, where Palestinians are shot using lethal force, denied medical attention, and where their bodies are used by the army against families as bargaining chips and tools of collective punishment.”

Erekat’s body is among dozens of bodies of Palestinians, killed in alleged security incidents, that Israel has refused to give back to their families. Israeli rights group B’Tselem told The Independent they know of 71 corpses currently being held, eight of them bodies of minors.

The controversial policy stems from an Israeli Supreme Court ruling in 2019 that said the Israeli army could keep bodies of alleged attackers in custody for the purposes of ensuring national security.

In September, according to Adalah, a Palestinian-run legal centre in Israel, as well as media reports, the Israeli security cabinet decided not to return the bodies of Palestinians killed by Israeli forces, regardless of their political affiliation or even if they had none.

Authorities reportedly justified the withholding of the bodies as a deterrent, and for use as leverage or “bargaining chips” to secure the release of Israelis unlawfully held by Hamas, the militant group that runs Gaza.

Hamas is holding two Israeli men with serious mental health conditions who crossed separately into Gaza in 2014 and 2015, as well as the bodies of two Israeli soldiers killed in Gaza during the 2014 war.

The Israeli embassy in London did not comment on the withholding of bodies, telling The Independent: “Israel’s policy of retaining terrorists’ bodies is under judicial review by Israel’s Supreme Court.”

But Omar Shakir of Human Rights Watch says it amounts to collective punishment of the family, who are not accused of any wrongdoing, which is a violation of international humanitarian law and could amount to cruel, inhumane, and degrading treatment of the family of the deceased, which is a violation of international human rights law.

“The bottom line is when a family loses a loved one it is a deeply painful experience that is heightened when that killing is unlawful. Withholding the body just compounds that pain,” he told The Independent.

“Preventing a family from burying their son in a dignified way is cruel and without legal justification. At the very least they should allow them to bury their loved one and have closure.”

Shakir also urged Hamas to release the bodies of the Israeli soldiers being held in Gaza to their families.

Adalah has filed a petition to the Israeli Supreme Court calling for the immediate return of Erekat’s body. The latest hearing has been postponed until 16 March. Erekat’s father Mustafa told The Independent he has been prevented from attending all the sessions as the Israelis have not given him permission to leave the West Bank and enter Jerusalem where the hearings are taking place.

Noura Erakat, Ahmed’s cousin, an assistant professor as Rutgers University who is also trained as a human rights attorney, said Israel’s policy of holding all Palestinian bodies in this way “collapses civilians and combatants”.

“It’s inhuman; forget about the international law that condemns it as collective punishment,” she told The Independent.

“The only way the Israelis get away with it is by framing these bodies as militarised bodies. The family has not been able to mourn – they have been suspended,” she added.

Killing of Palestinian man by Israel an ‘extrajudicial execution’

Innovaccer Inc., a leading healthcare technology company, has closed a new round of growth funding at a $1.3 billion post-money

AMD is announcing a new Radeon RX 6000 GPU in March

Global Brands, a leading branded apparel, footwear and accessories, and brand management company, has announced that it has partnered with