The eurozone is well placed to ride out recent market volatility and its economy will grow this year and next, the eurogroup president said, denying that the currency union faces a crisis akin to that which struck a decade ago.

Paschal Donohoe, who is Ireland’s finance minister as well as chief of the pan-eurozone group of finance ministers, said current circumstances were “completely different from the kind of crisis environment we were in” when the bloc was gripped by a spiralling sovereign debt sell-off in the early 2010s.

Donohoe said the euro area now had “stronger architecture” and “deeper foundations for our common currency”.

Since the region’s last debt crisis, the EU has bolstered its bank regulation with the creation of a pan-European supervisor and crisis-fighting infrastructure through a common resolution mechanism when lenders fail. The European Central Bank has new tools to buy government bonds, while lawmakers created a recovery fund backed by common debt during the coronavirus pandemic.

“We are all confident about our ability to navigate through the changes that are taking place,” he said.

Surging inflation and fraying confidence, stemming in part from energy supply disruptions caused by Russia’s full-scale invasion of Ukraine in February, have sparked fears that the eurozone is heading into a sharp downturn. As the ECB joins other policymakers in lifting interest rates, those fears have intensified. Italian and Spanish bond yields hit their highest levels for eight years last week as market jitters intensified.

Donohoe’s remarks came as ECB president Christine Lagarde prepares to face questions from MEPs at the European parliament on Monday over its recent contrasting messages.

Lagarde had sounded tough on inflation after the central bank’s governing council met in Amsterdam on June 9, when it decided to end eight years of negative interest rates and massive bond purchases. But last Wednesday, the ECB announced at an emergency meeting that it was speeding up work on a new “anti-fragmentation instrument” to prevent borrowing costs from surging disproportionately in weaker countries such as Italy.

German finance minister Christian Lindner suggested last week that the ECB had overreacted to the sell-off in bond markets. Lindner claimed the euro area was “stable and robust” and there was “no need for any concern” about some countries’ borrowing costs rising faster than others.

Although member states would have to commit themselves to credible plans for reducing public borrowing and managing inflationary pressures — the pace of price growth has topped 8 per cent — Donohoe insisted that a strong labour market pointed to economic expansion.

Donohoe highlighted employment growth as well as support from the EU’s €800bn NextGenerationEU programme, which he said would sustain the region’s economic expansion even if growth expectations have been cut.

Hiring, he added, was set to be a “very powerful source of momentum”, as was the implementation of post-Covid-19 recovery plans.

The eurozone economy is set to grow 2.8 per cent this year and 2.1 per cent next year, according to forecasts this month from the ECB. But the central bank also said a downside scenario involving Russia cutting off all energy supplies to Europe would lead the bloc’s economy to shrink 1.7 per cent next year.

The likelihood of such a scenario has risen after Moscow drastically reduced gas flows to Germany and Italy.

European capitals are attempting to strike a delicate balance between helping inflation-struck households while reducing public debt. The eurogroup is shifting from recommending that member states take a mildly supportive fiscal stance to a neutral policy, with more targeted support.

Governments’ borrowing soared during the pandemic as tax receipts fell sharply and spending on healthcare and economic measures ballooned.

“The starting positions for member states in terms of their debt and deficit levels is now very, very different to where we were before Covid hit us,” said Donohoe. “We will continue to need to have plans that reduce borrowing in a careful way. The plans to do it will have to be credible. They will have to reflect the fact that we are in an inflationary environment.”

Excessive levels of borrowing can themselves “contribute to the inflationary pressures we are currently trying to reduce”, the Irish finance minister added. “This is going to be a fine balance.” 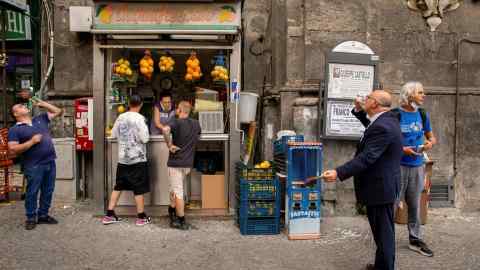 Some politicians have argued that the EU should undertake more joint borrowing to help support the energy transition and other priorities. But Donohoe insisted that member states wanted to focus on implementing existing plans.

“The scale of what we have agreed is so big that it would need some time for us to be able to show that has been fully executed,” he said.

Asked whether there needed to be economic conditions attached to any targeted bond-buying by the ECB, Donohoe declined to comment, saying the central bank would “do their work independently”.

“We do accept there are changes in market conditions, which is understandable as monetary policy changes to reflect a changing economy,” he said. Yet there was “unity of purpose in ensuring that we have the plans and steps in place to maintain the resilience of the euro and the euro area”.