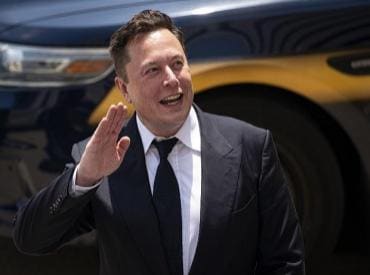 In a wide-ranging interview with Bloomberg News Editor-in-Chief John Micklethwait, the world’s richest man said there are still a few “unresolved matters” about Twitter, and he’s waiting for a resolution on the matter of how many bots are on the social media platform.

Earlier, Qatari Energy Minister Saad Al-Kaabi blamed underinvestment for high gas prices and called for more spending. The Gulf state, among the world’s biggest LNG exporters, is one of few nations that can substantially replace Russian gas supplies to Europe.

Western companies are investing in a $29 billion project to boost Doha’s exports — one of the largest projects in the natural gas industry. State-run QatarEnergy is scheduled to announce another deal on Tuesday, and Al-Kaabi said Exxon Mobil will get a stake.

NOTE: Qatar’s Ministry of Commerce and Industry, Qatar Investment Authority and Investment Promotion Agency Qatar are the underwriters of the Qatar Economic Forum, Powered by Bloomberg. Media City Qatar is the host organization.

Elon Musk said he doesn’t think there’ll be any issue balancing his Tesla interests in China with the future acquisition of Twitter Inc. The platform doesn’t operate in China and “China does not attempt to interfere with the free speech of the press in the US, as far as I’m aware,” he said in an interview.

Musk said there are still a few “unresolved matters” about Twitter, and is still waiting for a resolution on the matter of how many bots are on the social media platform. “There is the question of, will the debt portion of the round come together and then will the shareholders vote in favor,” he said.

The billionaire also said supply constraints are the biggest brake on Tesla’s growth, rather than competition from rival automakers. Jobs cuts at the electric-car maker will lead to a 3.5% reduction in headcount, he said.

Musk, who told Tesla executives earlier this month that he had a “super bad feeling” about the economy, warned that a recession in the US looks likely. He said he’s undecided about who he’d support in the 2024 presidential election when asked specifically if he’d back former president Donald Trump.

Exxon Mobil Corp. said global oil markets may remain tight for another three to five years largely because of a lack of investment since the pandemic began. It’ll take time for oil firms to “catch up” on the investments needed to ensure there’s enough oil supply, CEO Darren Woods said at the forum.

Oil prices have soared almost 50% this year to around $110 a barrel, mainly because of the fallout from Russia’s invasion of Ukraine. That further squeezed a market struggling to raise production fast enough to cope with economies recovering from the pandemic.

Meanwhile, Qatari Energy Minister Saad Al-Kaabi blamed underinvestment for high gas prices and called for more spending. Western companies including ConocoPhillips are investing in a $29 billion project to boost Doha’s exports. Exxon is one of the bidders and Al-Kaabi said the US firm would get a stake.

Georgia considers it “unfair” for the European Union not to grant candidacy status to the country after recommending it to Ukraine and Moldova, Prime Minister Irakli Garibashvili said in an interview at the Qatar Economic Forum with Bloomberg Editor-in-Chief John Micklethwait.

The Caucasus nation “would be the first country to be granted the status” on the merits of complying with the EU’s requirements, and the bloc gave it to Ukraine and Moldova because of the situation created by Russia’s war, he said.

While Georgia supports Ukraine politically, it’s in a “very vulnerable” position and can’t impose national sanctions on Russia over the invasion, though it won’t let Russian companies use Georgian territory to bypass sanctions, Garibashvili said.

Georgia remains determined to join the North Atlantic Treaty Organization, but understands it must first resolve its territorial problems with 20% of Georgian territory under Russian occupation since a 2008 war, the premier said.

“We realize that high energy prices are not permanent and will not last forever,” said Qatar’s Emir, Sheikh Tamim bin Hamad Al Thani, as he opened the Forum in Doha on Tuesday. The Persian Gulf nation is one of the world’s biggest suppliers of the fuel.

“We have lived through long periods of low energy prices,” Sheikh Tamim said. “The only thing that compensated for that were sound policies and saving during times of higher prices.”

Roubini is calling a US recession by the end of the year. “We’re getting very close,” as measures of consumer confidence, retail sales, manufacturing activity and housing are all slowing down sharply while inflation is high, he said on Bloomberg TV.

He sees further downside for both stocks and bonds in this environment.

Stock prices tend to fall by 35% during US recessions and by 50% in stagflationary periods, the chief executive officer of Roubini Macro Associates said, adding that the US 10-year Treasury yield could get to “well above 4%.” Meanwhile, if the yen falls by another 10% against the dollar, it will “imply a change in policy” by the Bank of Japan likely in terms of yield curve control, he added.

Namibia and its partners are “all aligned” on bringing country’s first two oil discoveries to production as soon as possible, Jennifer Comalie, chairperson of National Petroleum Corp. of Namibia, said in a Bloomberg TV interview Tuesday on the sidelines of the QEF.

TotalEnergies SE said in February it had made a “significant” oil discovery, weeks after Shell announced a find in the southwest African nation. “At peak, these two discoveries could bring $5.6 billion to a very small economy, doubling the GDP by 2040,” Comalie said, without giving details on when fields could start production or how much oil will be pumped.

TotalEnergies SE of France and Italy’s Eni SpA have also bought stakes, while Shell Plc and Exxon Mobil Corp. are among the others making bids. The expansion will increase Qatar’s LNG capacity to 110 million tons annually from 77 million, just as demand surges across the world.

Once the extra gas is flowing, Qatar expects to send more shipments to Europe. Around 80% of Qatari LNG currently heads to Asia, but the proportion being shipped to Europe will rise to 40%-50%, according to QatarEnergy CEO Al-Kaabi. 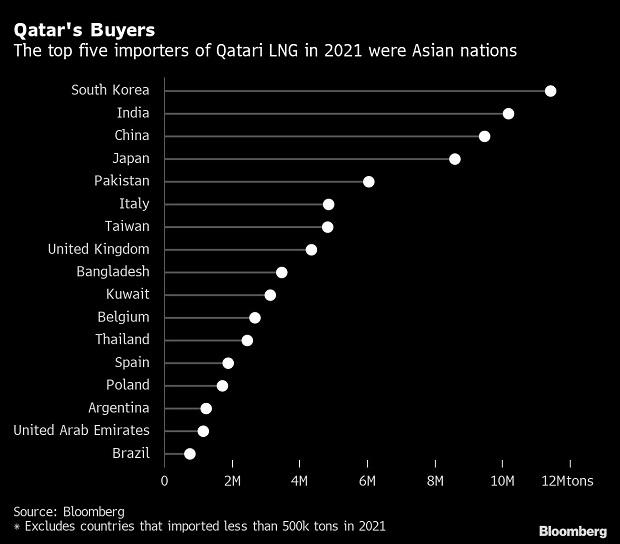 Rwanda’s Paul Kagame accused Democratic Republic of Congo President Felix Tshisekedi of ignoring the “real issues” threatening relations between the neighbors as fears mount of a new war in the Great Lakes region.

Over the past weeks, the two have blamed each other for stirring the conflict. Tshisekedi said Kagame is backing rebels against his government. Rwanda denies the allegation and has warned Congo against firing into its territory under the guise of going after insurgents.

“Making those accusations is simply running away from his responsibilities as the president of that country,” Kagame said in an interview at the Qatar Economic Forum. He was referring to an inability to deal with militant groups in eastern Congo, a threat successive Congolese administrations and the United Nations have failed to tackle for two decades.

The southern discomfort of Johnson’s Conservatives