A spate of high-profile battery fires is undermining India’s bid to become a leader in electric vehicles, particularly in the ubiquitous two-wheelers that ply the country’s traffic-clogged roads.

Social media is awash with videos of battery-powered scooters in flames. Last month, a father and daughter died from smoke inhalation after their brand-new bike from Okinawa Autotech Pvt caught fire while it was charging overnight at home. In another video, an Ola Electric Mobility Pvt scooter burns in Pune in the country’s west, while in another, some 40 two-wheelers made by Jitendra EV go up in smoke as they are transported in a container.

The incidents have, not surprisingly, made many Indians wary of electric vehicles — the number of people who said they wouldn’t buy an electric scooter due to safety and performance concerns jumped eightfold to 17 per cent in the seven months through March, a survey of around 11,500 consumers conducted by LocalCircles showed. Just 2 per cent of people are likely to buy an electric scooter in the coming six months, it found.

They’re also coming just as India, the world’s third-biggest emitter of greenhouse gases, is trying to get more electric vehicles on its roads. Already many consumers are reluctant to make the switch from combustion engine cars and motorcycles due to EVs’ high upfront cost and the country’s lack of charging stations, making it increasingly difficult for India to catch up with places like China and the U.S. that have made meaningful progress toward electrifying their transport fleets. About 77 per cent of annual passenger vehicle sales in China will be electric by 2040, versus just 53 per cent in India, BloombergNEF data show.

“When I hear of such incidents, I wonder why I should go for an electric vehicle. I’d rather buy a new gasoline one,” said Santhosh Kumar, who has an Ola electric bike himself but regards it now with a degree of caution. “I want to be part of the EV revolution and stop pollution but nothing is more important than the safety of my family and kids,” the 36-year-old from Chennai said.

The fires have also sparked debate about India’s dependency on imported auto parts that are then assembled locally. The concern is the resulting electric scooters aren’t designed from the ground up for the nation’s extreme climate — temperatures routinely soar to 48 degrees Celsius in the capital New Delhi — or its infrastructure. India’s roads are notoriously potholed, causing all sorts of suspension problems. India currently imports most of its EV components from China, depriving automakers of full control over the quality and reliability of their products. 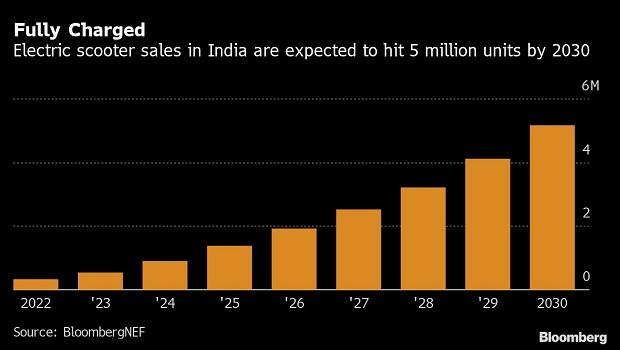 India’s nascent EV market is also flooded with startups that have rushed electric scooters to market and not all of them are going through the necessary rigor of testing under a wide variety of weather conditions, according to Rahul Mishra, a partner at management consultancy firm Kearney. Pressures of meeting investor expectations, the need to reduce time to market and managing stakeholder perceptions mean some haven’t fully built capabilities in product development, manufacturing, sales and after-sales, and so are struggling to demonstrate the same level of maturity as established automakers, he said.

“Coming out with a prototype is one thing but selling it in the market at a commercial scale like an established automaker is a completely different ballgame,” Mishra said, adding that established carmakers and startups alike need to consistently demonstrate that safety is “non-negotiable” when it comes to EVs.

Ola, which has pledged to build the world’s biggest scooter factory, follows “very high” regulatory standards and is examining the cause of the accidents, founder Bhavish Aggarwal said. Bengaluru-based Ola, backed by SoftBank Group Corp., said last week it will recall a batch of 1,441 scooters following an investigation into the vehicle fires.

Okinawa said in a statement to Bloomberg that it had recalled 3,215 units of its PraisePro electric scooters to fix battery-related issues, noting that the company complies with all testing standards set by the government. The scooters will be checked for loose battery connectors and repaired for free at dealerships, it said. Okinawa, India’s second-biggest electric two-wheeler maker by market share, blamed the fire on user negligence, saying the blaze was due to a short circuit that resulted from improper charging.

Jitendra EV didn’t respond to emails seeking comment. Pure EV, another company whose scooter was captured on video with thick plumes of gray and white smoke shooting from its rear, also didn’t respond to requests for comment.

The accidents have at least ushered in some reforms to India’s budding EV industry. Road Transport Minister Nitin Gadkari has pledged to adopt new standards to tackle the fires, which are likely caused due to thermal inefficiencies in lithium-ion batteries and exacerbated by hot weather. EVs should only be certified after they clear a revised testing system for battery packs and cells, he said earlier this week. In the meantime, automakers should be “cautious” with the cells they’re using and recall products if they discover manufacturing defects.

To be sure, India isn’t the only market to have experienced battery fires. Tesla Inc. cars have come under scrutiny in China after crashes damaged the batteries of several and General Motors Co. recalled a whole lot of Chevrolet Bolts after some went up in flames while parked in garages or driveways.

In China, authorities announced a new standard for battery two-wheeler models that will see tens of millions of non-compliant vehicles phased out by 2025, Gogoro Inc. Chief Executive Officer Horace Luke said. Gogoro is a Taiwanese electric scooter startup that earlier this year announced a tie up with Foxconn to expand in Indonesia. The Indian government should incentivize startups to focus on battery R&D, which requires a higher degree of human capital to meet a higher safety bar, he said.

“The technology development and management of batteries needs to be taken very seriously,” Luke said. “It’s important to understand that not all EVs or batteries are the same and when shortcuts are taken in their development, consumers can be exposed to potential unmitigated safety issues.”

But faced with a market potential the size of India, a country of some 1.4 billion where around 231,000 electric scooters were sold in the 12 months through March, that may be easier said than done.

“In a fast growing market, the temptation to launch early without a mature product is very strong,” said Ravneet Phokela, the chief business officer of Ather Energy Pvt, another electric scooter startup whose bikes haven’t been documented in any fires yet. Blazes can erupt from the faulty packaging of cells and badly engineered thermal management systems, which are responsible for dissipating heat, he said. “It’s a dangerous temptation to give in to.”

BoE governor says he is unable to stop inflation hitting 10%