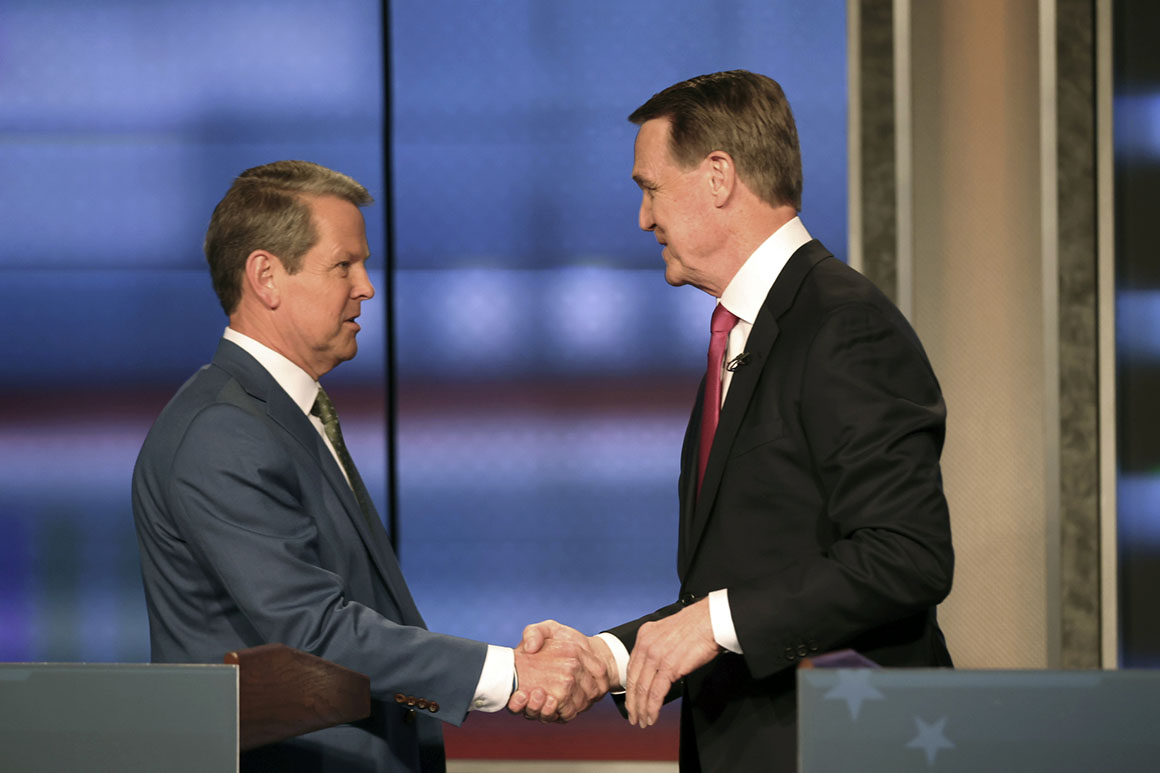 Kemp aimed to brand his challenger as damaged goods, saying several times that Perdue lost his last election to Democrat Sen. Jon Ossoff. The governor focused more on setting up his race against the presumptive Democratic nominee, Stacey Abrams.

Kemp repeated three times that he wants to make sure “Stacey Abrams is never your governor or your next president” and that he’s the only candidate to have already beaten her, referring to his 2018 victory.

The two candidates also debated rising crime, the economy and pandemic restrictions, as well as the question of cityhood for Atlanta’s Buckhead neighborhood. But the distance between Kemp and Perdue’s stances on the 2020 election marked their largest difference as both tried to boast their conservative stances on support for law enforcement, stopping illegal immigration and improving the economic condition of Georgia.

The state’s May 24 Republican primary election has races up and down the ballot featuring candidates endorsed by Trump. Trump has endorsed five candidates running statewide in Georgia, but the governor’s race has gotten special attention from the former president.

Trump started a public feud with Kemp after the November 2020 presidential election when he asked the governor to not certify the state’s election results. He also asked Kemp to call a special session of the state legislature to name a new set of Republican electors to cast the state’s electoral college votes. Kemp refused.

Perdue echoed Trump’s calls for a special session on Sunday. He also complained to the incumbent governor that there haven’t been any voter fraud arrests made in connection to the 2020 election.

“Weak leaders take credit when things go well, and blame someone else when it doesn’t,” Perdue said.

Kemp’s response: “Weak leaders blame everybody else for their own loss instead of themselves.”

Kemp added that “looking in the rearview mirror” won’t defeat Abrams, who was mentioned at least 15 times during the debate.

Trump claimed credit for Kemp’s 2018 victory in the governor’s race, after his endorsement helped in a run-off election, and he told aides that meant Kemp owed him a political debt. When Kemp failed to accede to Trump’s wishes, Trump vigorously and consistently attacked him.

At a rally last year, Trump went as far as suggesting that he would prefer Abrams to Kemp, if they repeat their head-to-head match this November.

“Of course having her, I think, might be better than having your existing governor, if you want to know what I think. Might very well be better,” Trump said at a rally in Perry, Ga., in September 2021.

Perdue became Trump’s candidate of choice for governor and quickly adopted calls to investigate the 2020 election and criticisms that Kemp should have called a special session to his campaigning.

Despite Trump’s endorsement, Perdue still trails in the polls: The latest poll from WGCL-TV/Landmark shows Kemp with a 24-point lead over Perdue. Fifty-two percent of people supported Kemp, 27 percent supported Perdue and about 10 percent were undecided.

Earlier polls from this year also all show Kemp leading.

A March Trump rally for Perdue and his other endorsees in Commerce, Ga., hasn’t budged the polls.

“Well, Trump came and there was blanket media coverage of his rally. If you don’t know at this juncture, you’re not a voter,” said Brian Robinson, a Republican consultant, in an interview before the debate. “You are so disengaged that there’s no possible way that you know that there’s an election on May 24.”

According to the last campaign finance disclosures, Kemp has more than $12 million cash on hand, compared to less than $1 million for Perdue.

Previously, both candidates have skipped out on debates: Perdue missed his only debate with Ossoff ahead of the 2021 run-off election, and Kemp pulled out of one of two debates against Abrams in the 2018 race.

The two Republicans will face each other again in another debate on Thursday.

CORRECTION: An earlier version of this report misstated that Gov. Brian Kemp failed to attend any debates in 2018 against Democrat Stacey Abrams. He attended one debate and pulled out of another.