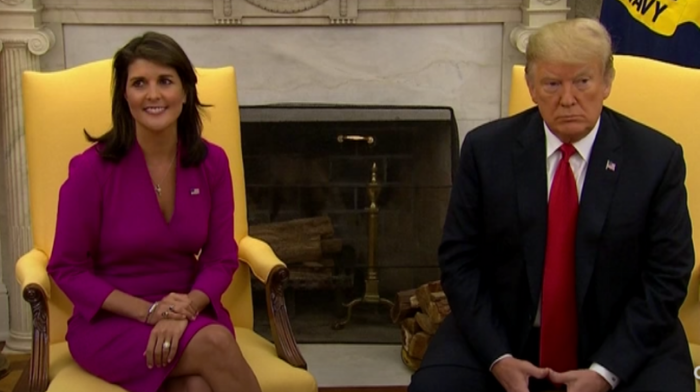 According to a report on Thursday, when former United Nations Ambassador and establishment favorite for 2024 Nikki Haley requested a meeting with former President Donald Trump, she was turned down.

Politico’s Playbook reported that Haley asked to meet with her former boss his at Mar-a-Lago resort in Palm Beach, Florida. Politico cited a “source familiar” with the exchange.

It’s no secret that Haley has presidential aspirations, and the former governor of South Carolina is much more in line with the Cheney-McConnell-establishment wing of the GOP, not the America First-Trump wing.

Politico: “Nikki Haley reached out to Donald Trump on Wednesday to request a sit-down at Mar-a-Lago, but he turned her down, a source tells Playbook.” https://t.co/3XxcUCpRM4 via @playbookplus

Trump Snubs Haley After She Harshly Criticized Him Last Week

Last week, Haley criticized Trump during an in-depth interview with Politico Magazine’s Tim Alberta and suggested that the former president had become irrelevant.

“I think his business is suffering at this point,” she went on. “I think he’s lost any sort of political viability he was going to have.”

And @TimAlberta‘s final piece for @politico magazine is a blockbuster https://t.co/uj63NAKusf

Haley Said She Is ‘Disgusted’ By Trump’s Treatment Of Pence

Haley even said she was “disgusted” by Trump’s behavior toward former Vice President Mike Pence.

Haley added, “I am so disappointed in the fact that [despite] the loyalty and friendship he had with Mike Pence, that he would do that to him. Like, I’m disgusted by it.”

After the Politico interview, Haley wrote an op-ed for the Wall Street Journal claiming that the “liberal media” was misportraying her and was trying divide Republicans.

Haley wrote, “The media playbook starts with the demand that everyone pick sides about Donald Trump—either love or hate everything about him.”

This reads as media-bashing but it’s actually damage control/homage to @TimAlberta and everybody who works in and covers politics will see it as such https://t.co/QsL0kXk1qt

But it’s not the first time Haley has viciously attacked Donald Trump.

In 2016, when the Republican establishment was still desperately trying to stop Trump from locking up the GOP nomination for President, Haley tried to smear Trump by linking his “rhetoric” to Dylann Roof.

Roof is the psychopath who murdered nine black Christians in a South Carolina Church in 2015.

Prior to that, Haley falsely claimed that Trump refused to disavow white supremacists and the KKK.

Most Expect Haley To Make A White House Bid In 2024

Haley has been expected by many to seek the Republican presidential nomination in 2024 but a lack of support from Trump could be a make or break relationship for anyone running for the White House in four years.

If you’re going to oppose Trump within the GOP, if you try to straddle appeasing him and criticizing him, it ends up like this https://t.co/HUkDNMJ5Qi

RELATED: Is Trump Running For President Again? He Declares ‘Tremendous Support’ For 2024 Run

That is, if former President Trump does not run again himself.

Haley has not officially announced an expected campaign for president in 2024 but a recent poll suggests she may have a hard time getting the Republican nomination without the support of Trump.

Iran’s impoverished southeast has experienced wide disruptions and outages of internet service over the past week, as unrest gripped the

Grenell strongly hints at run for California governor at CPAC

18 Amazon products to help you stay organized in the kitchen

We tested nine top-rated yoga mats. These five stood out

RoboKiller puts spam callers to shame with a prescreening

Photography via instagram.com/glowrecipeCatch up on the beauty news you may have missed, including the first-ever Glow Recipe body product and

From Basic Tees to Fancy Blouses, This Bra Transformed My Outfits For The Better

The 7 Best Shoes for High Arches

Photography via ImaxTreeLike Miuccia Prada and Raf Simmons giving us something to smile about at Prada. By Eliza Grossman Date