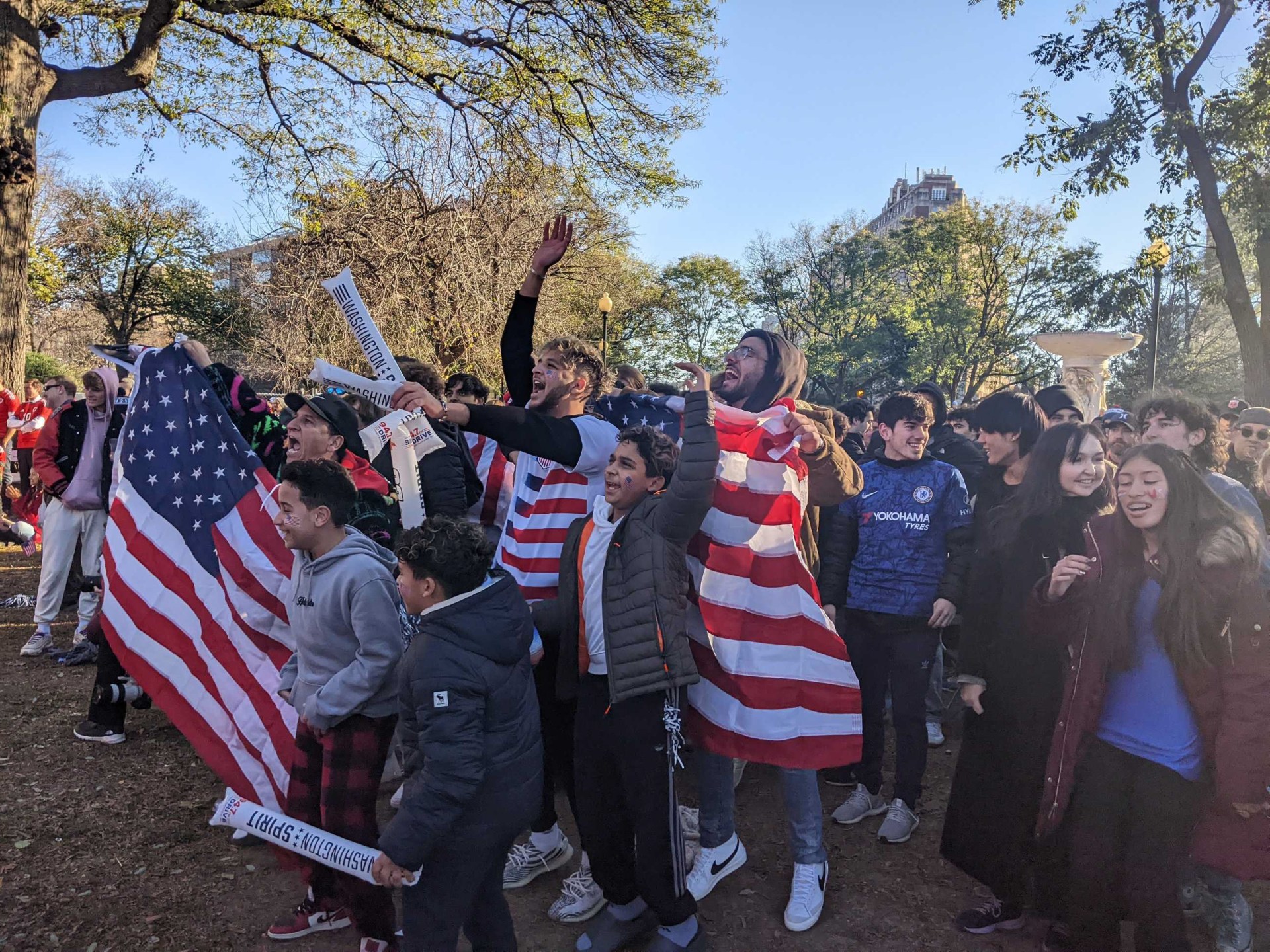 After eight-year wait, jubilant US fans celebrate their national team’s return to the World Cup in game against Wales.

Washington, DC – It was a nailbiter — a game of two halves that could have gone either way.

And while the United States men’s national team (USMNT) drew 1-1 to Wales in its first World Cup match in more than eight years on Monday, for many American fans the excitement began at kick-off and did not stop until the final whistle, no matter the score.

“It was incredible,” 33-year-old Allan Hutchins said of hearing the US national anthem at the World Cup. “Ah-may-zing, absolutely amazing,” he added, stressing every syllable.

Hutchins was among dozens of American fans who gathered at an outdoor park at DuPont Circle in the heart of Washington, DC, on Monday afternoon to watch the US team step onto the pitch at Qatar’s Ahmad Bin Ali Stadium.

Chants of “USA, USA” and “I believe that we will win” broke out amongst the crowd as soon as the US national anthem concluded.

Still, Hutchins was not entirely happy with the final result. He said the US should have won because the team dominated the match for long periods and took the lead, only for Wales to equalise with a late penalty kick.

Vladimir Guzman, another US fan, also said he was less than satisfied with the draw, but he was happy enough to see the USMNT in Qatar, especially given his native Bolivia has not qualified for the World Cup since 1994.

“Why would I be disappointed? I think we played great,” he told Al Jazeera.

With football — known in the US as soccer — growing in popularity over the years, the World Cup is capturing people’s attention across the country.

Viewers are adjusting their daily schedules, and some cities are even changing regulations to accommodate the tournament. For example, in Washington, DC, the city council passed an emergency measure to allow bars and restaurants to stay open 24-7 for the World Cup.

At DuPont Circle on Monday, jubilant fans roared, jumped and embraced when American striker Timothy Whea put the ball past the Welsh keeper and into the back of the net to put the team up 1-0 in the 36th minute.

The jersey-wearing and flag-waving fans were not deterred by the cold weather as they came together to watch the game.

“It’s been a long time coming,” 21-year-old Mamadou Wone said of the US return to the World Cup. “Last time we missed out, and it was kind of heartbreaking to me. But at least we’re back, and hopefully we can go as far as we possibly can.”

Egyptian-American Youssef Ibrahim, standing in a US team shirt with an American flag sticker on his cheek, was among the most visibly enthused fans at the watch party. He was 11 years old the last time the US played in a World Cup.

“Everyone has been waiting for this moment for eight years now,” Ibrahim told Al Jazeera. “It’s just a crazy feeling.”