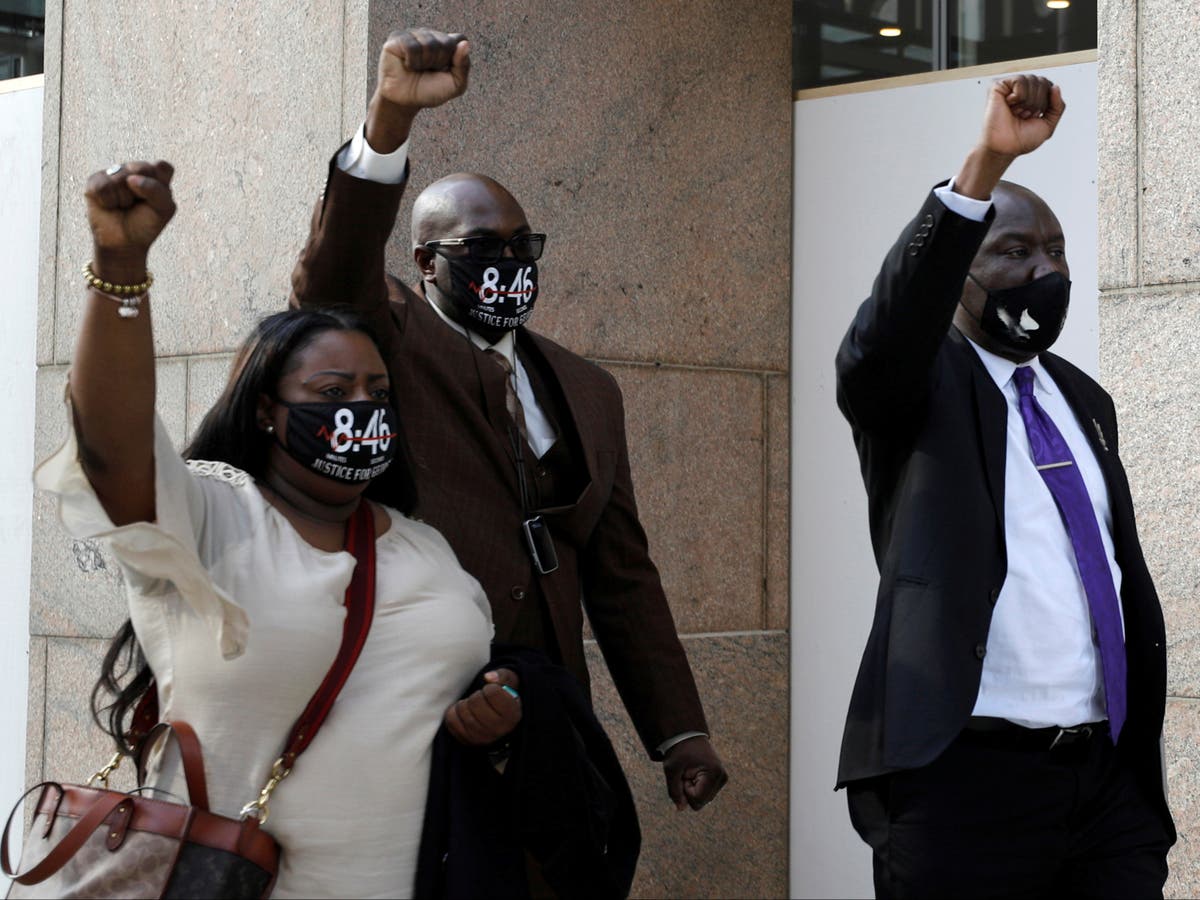 Several senior members of the Minneapolis police force testified against Mr Chauvin this week in a damning indictment of the former officer’s actions.

Under official police training, former Minneapolis police officer Chauvin should not have put his knee into George Floyd’s neck, and even if he did, he should have stopped once Mr Floyd stopped resisting arrest and eventually fell unconscious, they testified.

“Once Mr Floyd had stopped resisting, and certainly once he was in distress and trying to verbalise that, that should have stopped,” Minneapolis police chief Medaria Arradondo told the court on Monday.

On Tuesday, a Los Angeles police department use of force expert agreed.

“My opinion was that the force was excessive,” Jody Stiger, a use of force expert from the Los Angeles Police Department, said in testimony.

Mr Stiger noted that officers initially had grounds to use force on Mr Floyd, since he was “actively resisting” arrest and flailing as officers tried to get him into a squad car.

“Initially when Mr Floyd was being put in the backseat of the vehicle, he was actively resisting the officers,” Mr Stiger testified. “However, once he was placed in the prone position on the ground, he slowly ceased his resistance and at that point the ex-officers, they should have slowed down or stopped their force as well,” he continued.

Hello and welcome to The Independent’s rolling coverage of day seven of the Derek Chauvin trial.

Several senior members of the Minneapolis police force testified against Mr Chauvin on Monday in a damning indictment of the former officer’s actions, as the murder trial resumed following a weekend recess.

Police chief Medaria Arradondo told the court that officer Chauvin should not have put his knee into George Floyd’s neck, and even if he did, he should have stopped once Mr Floyd stopped resisting arrest and eventually fell unconscious.

“Once Mr Floyd had stopped resisting, and certainly once he was in distress and trying to verbalise that, that should have stopped,” Minneapolis police chief Arradondo told the court.

“There’s an initial reasonableness in trying to get him under control in the first few seconds,” the police chief continued.

“Once there was no longer any resistance, and clearly when Mr Floyd was no longer responsive and even motionless, to continue to apply that level of force to a person proned out, handcuffed behind their back, that in no way shape or form is by policy, is not part of our training, and is certainly not part of our ethics or values,” Mr Arradondo added.

More witness testimony is expected today, as the prosecution is scheduled to present evidence to the court on the seventh day of the trial.

George Floyd family attorney Benjamin Crump urges people to not “overlook the heart-wrenching pain” that his clients are feeling, as the murder trial of Derek Chauvin enters its seventh day.

“We CANNOT overlook the heart-wrenching pain the Floyd family is experiencing with the assassination of George’s character,” Mr Crump, a famed civil rights attorney, tweeted on Monday evening.

“But we MUST remain hopeful that the jury’s humanity will overrule the callousness of #Chauvin’s defenders!,” he added.

Mr Crump linked an interview with CNN to the tweet, where he said that the Floyd family is “obviously very emotional” like the majority of America, “especially Black people”.

The official who commanded the Minneapolis police department’s training division said former officer Derek Chauvin wasn’t following any department guidelines when he kneeled on George Floyd’s neck for minutes on end last May during his fatal arrest.

“Per policy, a neck restraint is compression of one or both sides of the neck using an arm or a leg,” Katie Blackwell, who is now an inspector in the department, said in testimony on Monday.

“What we train is using one arm or two arms to do a neck restraint. I don’t know what kind of improvised position that is. That’s not what we train.”

Who are the leading prosecution and defence attorneys in Derek Chauvin trial?

The murder trial of former Minneapolis police officer Derek Chauvin is scheduled to enter its seventh day at around 8:30am CT (2:30pm UK) on Tuesday, following an eventful day of witness testimony on Monday.

More witness testimony is expected today, as the prosecution is scheduled to present evidence to the court.

But who is leading the prosecution and the defence in the trial?

The doctor who treated George Floyd after he arrived motionless and without a full pulse to a Minneapolis hospital says he was initially told the cause of Mr Floyd’s trauma was neither a heart attack nor a drug overdose.

Dr Bradford Langenfeld, who was then a resident at the Hennepin County Medical Centre, said that after examining the evidence, “asphyxia, as it’s commonly understood,” a lack of oxygen to the body, seemed to him the most likely cause of death.

“In my experience, seeing a lot of cases of mental health crisis or drug use leading to agitated states, that is almost always reported by paramedics,” he testified on Monday. “And so the absence of that information was telling in that I didn’t have reason to believe that was the case here.”

Cher has apologised for a social media post in which she suggested she could have prevented the death of George Floyd.

Last Friday (2 April), Cher wrote on Twitter: “Was talking with Mom & She Said ‘I Watched Trial Of Policeman Who Killed George Floyd, & Cried.’

“I Said ‘Mom, I Know This Is Gonna Sound CRAZY, But.. I Kept Thinking …..Maybe If I’d Been There,…I Could’ve Helped.”

Lawyer argues to quash subpoena to get key witness to testify

Public Defender Adrienne Cousins appeared in court on Tuesday arguing for a subpoena asking witness Morries Lester Hall to testify to be quashed.

Mr Hall, who was in the car with George Floyd when he was detained, was scheduled to appear in court via video link on Tuesday from the county jail where he is currently being held on unrelated domestic abuse charges.

However, in a court filing last Wednesday Mr Hall announced his decision to invoke his Fifth Amendment right against self-incrimination during the questioning on Tuesday.

At the start of the seventh day of the trial, Mr Hall’s lawyer attempted to quash the subpoena by arguing that it could “expose him to potential incrimination”.

The court has yet to rule on whether Morries Hall, who was in the car with George Floyd the day of his fatal arrest, will have to testify. Previously, Mr Hall has indicated he will invoke his 5th Amendment rights against self-incrimination.

Judge Peter Cahill sent attorneys for both sides away from a pre-trial hearing today to further prepare for a decisive hearing on the matter on Thursday, which would cover whether Mr Hall could be asked a narrow set of questions about George Floyd’s mental and physical state in the moments before his encounter with police.

“We need to tread carefully obviously,” the judge said. “The 5th Amendment is a broad one.”

Public Defender Adrienne Cousins argued if Mr Hall is called to testify at all, it could expose him to prosecution on charges ranging from drug possession all the way up to third-degree murder, as Mr Hall allegedly sold drugs to Mr Floyd before his death.

“At this point in time Mr Hall has no immunity,” Ms Counsins said. “He has been provided no immunity, no protection for his testimony whatsoever.”

Judge Cahill declared that both parties will be able to propose in writing a set of questions for Mr Hall about how Mr Floyd was acting before he was arrested. Previous witnesses have said Mr Floyd fell asleep before police found him, which could speak to potential intoxication.

The court will decide on the questioning later this week.

Al Sharpton and Ben Crump are in courthouse today

Two high-profile civil rights advocates were spotted on Tuesday watching the Derek Chauvin trial inside the courthouse. Activist Rev. Al Sharpton, as well as attorney Benjamin Crump, both of whom have been working with the Floyd family, were seen watching the trial in the family viewing area, according to pools reports.

US: We we will work in ‘lockstep’ with Japan, S Korea on N Korea