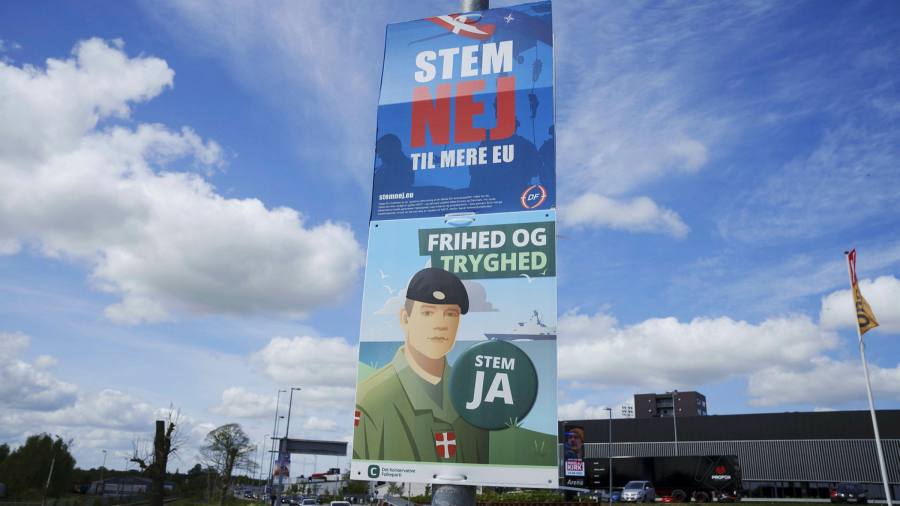 Danes will vote on Wednesday on whether to abandon their country’s opt-out from the EU’s defence and security policy in the latest potential huge policy change in northern Europe following Russia’s full-scale war against Ukraine.

Denmark has a history of voting against the EU in referendums but the centre-left government is optimistic that now is the right time for the Scandinavian country to end its status as the only member state not to take part in the bloc’s defence co-operation.

“Denmark belongs in the heart of Europe, without any reservations,” said prime minister Mette Frederiksen when announcing the referendum.

“Nato will still be the main tool for our defence and security, and the EU is an addition to that,” said Mogens Jensen, defence spokesman for the ruling Social Democrats. “If we are outside the EU co-operation, we cannot be part of that discussion.”

Opinion polls have consistently given a lead to those wanting to end the opt-out, but experts and politicians are cautious owing to Denmark’s long-rooted Euroscepticism.

Denmark secured an opt-out from EU co-operation on defence, as well as on membership of the euro and judicial affairs, after the country’s 1992 rejection of the EU’s Maastricht treaty in a referendum. Danes then rejected joining the euro in 2000, and voted against changing its justice opt-out in 2015.

The latest Danish referendum comes just weeks after Sweden and Finland opted to join Nato, the biggest change in security arrangements in the Nordic region for decades.

Denmark remains committed to Nato and is opening up for foreign troops to be able to train and exercise on Danish soil for the first time since at least the 1950s. But as the US starts to turn more towards Asia, Denmark is worried that being outside the EU’s defence policy could rob it of influence in a crucial area, particularly as European countries increase their military spending.

“The consequences of the opt-out are increasing. Generally, it has meant a loss of Danish influence. We are not able to take part in the negotiations. There has been some weakening of Danish reputation when it comes to the EU security and defence policy,” said Christine Nissen, researcher at the Danish Institute for International Studies, who noted the opt-out had been used 235 times since 1993.

Kristian Søby Kristensen, deputy head of the Centre for Military Studies at the University of Copenhagen, underscored the importance for Denmark of neighbouring Germany’s recent big change to its defence and security policies. Berlin is ramping up military spending in response to Russia’s war on Ukraine.

The referendum “is an attempt to be ready to handle a more assertive Germany in EU defence and security policy”, he said.

Danish opponents of the EU have argued that Denmark would be best relying solely on Nato. They have seized upon comments by some leaders such as French president Emmanuel Macron and head of the European Commission Ursula von der Leyen on their hopes for an EU military or for the EU to adopt qualified majority voting on defence matters.

Some observers believe the referendum could boost the nationalist Danish People’s party, which wants to retain the opt-out, and allow it as the main voice of the Eurosceptics.

The party has suffered in the polls since the centre-left Social Democrats took over much of its anti-immigration rhetoric but the ruling party is considered to have been on the back foot for much of the referendum campaign after it was forced to change the wording of the question.

“The less we say the more they’ll cock it up . . . We just have to be quiet and watch them [make] mistake after mistake and we will win as we always do,” said Søren Espersen, the DPP’s defence spokesman, of his party’s domestic rivals.

Polls open at 8am local time on Wednesday and close at 8pm, with final results possible late the same evening.