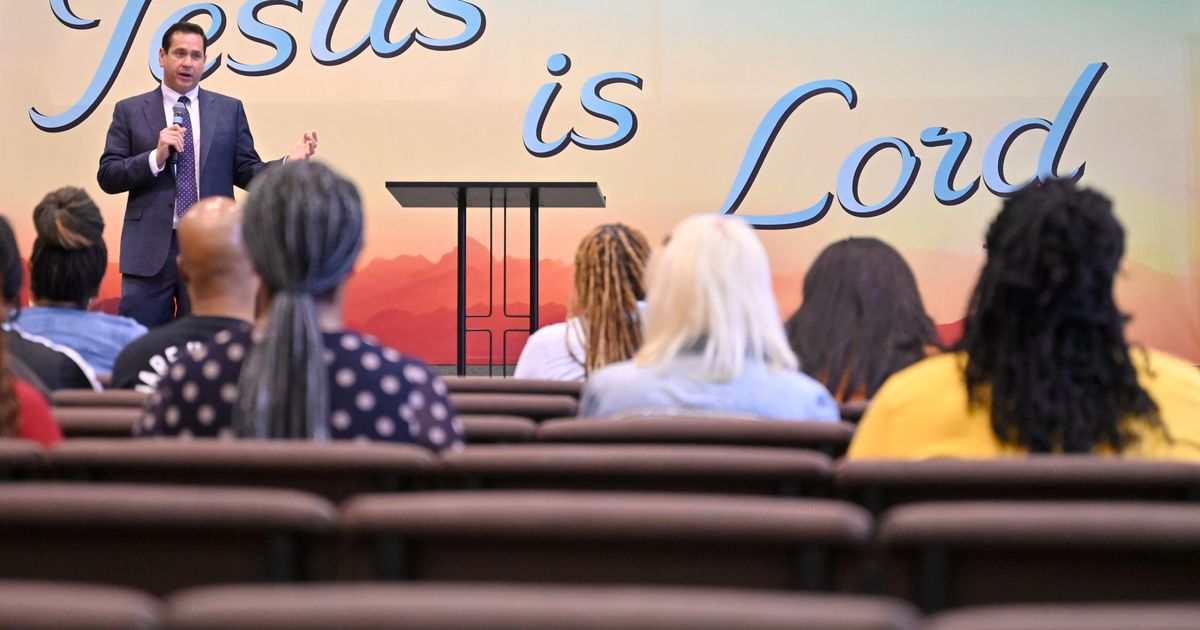 Democrat Cisco Aguilar is projected to win Nevada’s secretary of state race, beating Republican Jim Marchant, who falsely claimed not only that the 2020 election was stolen from Donald Trump but that a “deep state cabal” has controlled all elections in the state for years.

Aguilar, the state’s former athletic commissioner, told Politico he wanted to run for the job to reform Nevada’s business filing system, but that the importance of election administration became clear after Marchant won the Republican nomination.

“When the [GOP] primary results were announced, it just hit me like a ton of bricks,” he said.

Marchant, the head of a group of “America First” secretary of state candidates pushing the lie that the 2020 election was stolen, is a leader in the effort to sow doubt about Republican electoral losses. He has also cultivated ties with an influencer in the QAnon conspiracy theory movement, which supports the mass arrest or execution of public figures they accuse of being satanic pedophiles.

Marchant stood with the Nevada GOP’s slate of Trump “electors” seeking to overturn the state’s legitimate presidential election results in 2020, and he later said he would not have certified the election that Joe Biden won by 33,000 votes. He also sued to overturn the results of his own congressional race that year, which he lost by more than 16,000 votes. Like Trump, Marchant claimed he was “a victim of election fraud.” And the state party is behind him: The Nevada GOP censured the current term-limited secretary of state, Barbara Cegavske (R), in part for “failing to investigate election fraud.”

Aguilar, a former staffer for the late Senate Majority Leader Harry Reid (D-Nev.), had warned that a vote for Marchant would damage voters’ trust in the election process.

“Right now we have an opportunity to elect someone who will continue voter confidence or we could have someone who will tear down the system because they don’t like it and it hasn’t benefited them,” he told Nevada Current last month. “All Nevadans will suffer because of him.”

Marchant has said he wanted to run for secretary of state “because we control the election system.” He ran for the state’s top elections official job on a record of damaging lies about American democracy.

“Your vote hasn’t counted for decades,” Marchant told listeners at a debate in February, a few months before he won the GOP primary for the secretary of state race. “You haven’t elected anybody. The people that are in office have been selected. You haven’t had a choice.” He told The Guardian in January that it was “very possible” he’d support designating another false slate of electors in 2024.

Alarmingly, Marchant said he’d consider making every Nevadan re-register to vote ― a common 20th-century tactic for the suppression of Black voters. He has also endorsed new voter ID requirements and called for “NO Mail-in ballots” and a ban on drop boxes. He has said he’d “like to get rid of the early voting,” even though he has promoted the practice to his supporters and voted early himself, Nevada Current reported.

Marchant had also promised to decertify Dominion voting machines, the demonized election machines that the majority of Nevada counties use.

Aguilar positioned himself as a business-friendly Democrat during his campaign, telling The Nevada Independent that the state ought to maintain its status as the “Delaware of the West.” But he also emphasized the importance of independent election administration throughout the race, as opposed to Marchant, who declared that Trump would return to the White House in 2024 if he and others on the right won their secretary of state races this year.

The state’s top elections official, Aguilar told Nevada Current, should be “someone who is neutral and impartial to what the actual outcome is and listening to voters in Nevada, versus saying ‘this is the outcome I want and I’m going to influence it to that direction,’ which my opponent will absolutely do, and has stated on the record that’s what he will do.”

In spite of his loss to Aguilar, Marchant has already had an impact. After a pitch from Marchant, Nevada’s Nye County attempted to hand-count its 2022 mail-in ballots as they arrived to election officials. Cegavske and the state’s Supreme Court intervened to stop the exercise. The hand count happened, but it didn’t go well: The Associated Press reported last month that it took 60 volunteers a full day to count just 900 ballots, and that the effort was stalled by repeated mismatches in various volunteers’ ballot tallies.

Marchant is a founding member of the America First Secretary of State Coalition ― members include the GOP secretary of state nominees in Michigan, Arizona and New Mexico, and Pennsylvania gubernatorial nominee Doug Mastriano ― which also points to his involvement with QAnon conspiracy theorists. He started the group with a QAnon influencer who goes by “Juan O. Savin,” and who has described a plan to turn Washington, D.C., into a concertina wire-covered war zone “like they did in Fallujah,” The Daily Beast reported.

Savin proposed to screen the city’s inhabitants, and then, he said, “anybody that’s still left in the city after three days, you’re an enemy combatant. We’re gonna come get ya. You can come out or we can blow you out, we can drag you out, you’re coming out of there one way or another.”

During a speech last October in which he praised Savin by name, Marchant said he “couldn’t stress enough” how important he believed this year’s secretary of state elections were.

“We control the election system, just like George Soros and Harry Reid knew,” he said. “So we’re going to counter-reverse what they did. And in 2022, we’re going to take back our country.”

Eric Trump Said His Dad ‘Fought For This Country’ And Critics Went … What Now?!?

Turkey earthquake – latest: Survivors scream from under rubble as rescuers battle to save hundreds of families

US boy, 6, who shot first-grade teacher, also choked another teacher ‘until she couldn’t breathe’

Super Bowl Diary: Opening night fun, a trip to the desert, and #FreeJeff