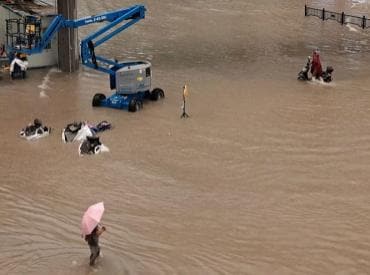 Around 100,000 people have been relocated from a central Chinese city known as the world’s biggest production base for iPhones, after record daily rainfall led to widespread flooding and the death of at least 12 people.

The city of Zhengzhou in the central province of Henan saw 457.5 millimeters (18 inches) of rain fall in the 24 hours through 5 p.m. on Tuesday, the highest since records began for the city of more than 10 million people, the official Xinhua news agency reported. That included a record 201.9 millimeters in a single hour, from 4 p.m. to 5 p.m. The city’s airport said on its Weibo page it has temporarily suspended inbound flights.

Henan is one of China’s biggest wheat-producing areas and a major manufacturer of machinery, while Zhengzhou is home to the largest iPhone-making plant, owned by Taiwan’s Hon Hai Precision Industry Co. The flooding struck just as the company, known also as Foxconn, prepares to ramp up output ahead of the launch of Apple Inc.’s latest devices toward the end of the year.

Hon Hai’s plant in Zhengzhou receives components from around the world and across China that it needs to assemble iPhones, before then shipping them out internationally. A representative for Hon Hai said it was looking into the situation.

Thousands of rescue workers including soldiers and firefighters have been dispatched to carry out rescue work in the city, it added.