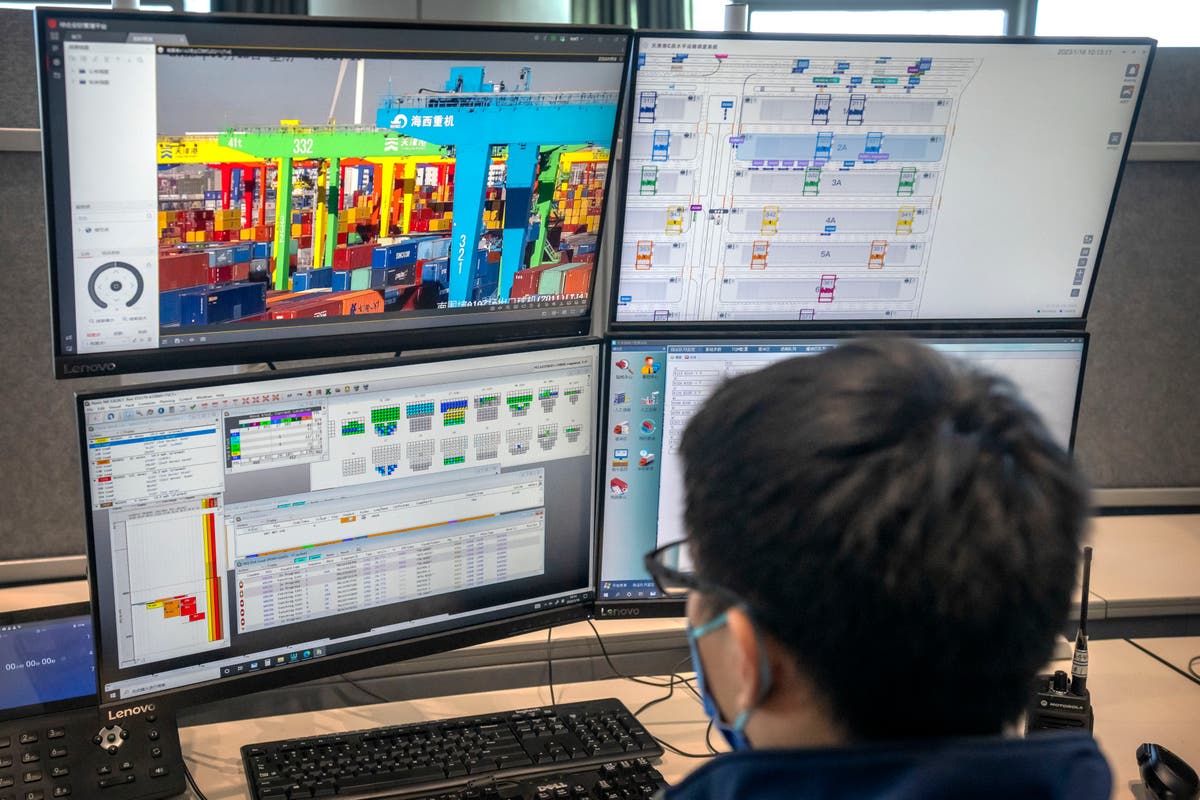 As technicians in a distant control room watch on display screens, an automated crane at one of China’s busiest ports moves cargo containers from a Japanese freighter to self-driving trucks in a scene tech giant Huawei sees as its future after American sanctions crushed its smartphone brand.

The backbone of the “smart terminal” at the Tianjin Port, east of Beijing, is a data network built by Huawei, which is reinventing itself as a supplier for self-driving cars, factories and other industries it hopes will be less vulnerable to Washington’s worsening feud with Beijing over technology and security.

The ruling Communist Party is promoting automation in industries from manufacturing to taxis to keep China’s economy growing as the workforce ages and starts to shrink. Its managers say the “smart terminal,” part of Tianjin’s 200-square-kilometer (77-square-mile) port, allows 200 employees to move as much cargo as 800 used to.

“We believe this solution in Tianjin is the world’s most advanced,” said Yue Kun, chief technology officer of Huawei’s business unit for ports. “We believe it can be applied to other ports.”

Huawei Technologies Ltd., which makes smartphones and is the biggest global supplier of network gear for phone carriers, struggled after then-President Donald Trump cut off access to American processor chips and other technology in 2019 in a feud with Beijing about security.

Washington says Huawei is a security risk that might use its access to foreign phone networks to facilitate Chinese spying, an accusation the company denies. The United States and allies including Japan and Australia have banned or restricted use of Huawei equipment by their phone carriers.

Smartphone sales outside China collapsed after Huawei lost music, maps and other services from Alphabet Inc.’s Google that handset buyers expect to see pre-loaded. Its low-end Honor brand was sold off in 2020 in hopes of reviving sales by separating it from the sanctions on its corporate parent.

Huawei, with a workforce of almost 200,000, has held onto its status as the leading maker of network gear based on sales in China and other markets where Washington has had less success at encouraging governments to shun the company.

“Huawei is already a key player” in data networks with a “wealth of knowledge,” said Paul Budde, an industry analyst.

The company has created 20 teams to focus on factories, mines, hospitals, ports, power plants and other industrial customers. It says the auto unit has 3,000 people working on autonomous driving and invested $2 billion in the technology in 2020-21. Huawei was an early developer of “smart city” networks for traffic control and police surveillance.

“The big, black cloud here, however, is geopolitics,” said Budde. “This will hamper its participation in overseas markets,” he said. “The issues are not technology but are purely political.”

American pressure on Huawei spiraled into an international standoff in 2018 after its chief financial officer, Meng Wanzhou, daughter of its founder, was arrested in Canada on U.S. charges related to accusations of violating trade sanctions on Iran.

China arrested two Canadians on spying charges, trying to win Meng’s release. They were freed in September 2021 after Meng was allowed to return to China under an agreement with American prosecutors in which she took responsibility for misrepresenting Huawei’s dealings with Iran.

Huawei says its new focus already is helping to revive the company’s fortunes.

“In 2020, we successfully pulled ourselves out of crisis mode,” said Eric Xu, one of three Huawei executives who take turns as chairman, in a December letter to employees. “U.S. restrictions are now our new normal, and we’re back to business as usual.”

Last year’s revenue was forecast to be little-changed from 2021 at 636.9 billion yuan ($91.6 billion), Xu said. That was below Huawei’s double-digit growth of a decade earlier but an improvement over the 5.9% slide in the first half.

The auto unit, which supplies components and software for navigation, dashboard displays and managing vehicle systems, has played a role in five models released by three Chinese automakers.

The ruling party’s urgency about rolling out automation has risen as the size of China’s working age population 16 to 59 declined after hitting a peak in 2011. That group has shrunk by about 5%. Its share of the population slid from 70% to 62%.

The Tianjin port managers told Huawei they already were having trouble finding and keeping truck drivers, according to Yue.

“This can help to address the aging population issue,” said Yue.

Yue said Huawei has talked with “people outside China” who might use its port technology, but he gave no details.

The annual market for port-related network technology is modest at $2 billion, but global sales of gear to link factory and medical equipment, cars and other devices total $600 billion a year, according to Budde. He said that has the potential to replace Huawei’s lost smartphone and other telecom sales, so long as foreign buyers aren’t put off by security concerns.

The Tianjin port’s fleet of 88 battery-powered autonomous trucks are charged by wind turbines, according to a port spokesman, Peng Pai.

“It’s much safer, and it uses clean energy,” said Peng.

In a third-floor control room with floor-to-ceiling windows that look out over the port, a dozen operators sit in front of displays with as many as six screens showing video feeds of computer-controlled cranes lifting cargo boxes onto or off ships. Each can monitor as many as six cranes at once, unlike a traditional operator who serves only one ship.

“People had to work high up in cranes,” said Yang Jiemin, a vice president of Tianjin Port Group. “Now, our operators can sit in an office and monitor equipment remotely.”

Operators take control of a crane or truck if sensors indicate a problem, according to Huawei’s Yue. He said the port’s goal is to cut that “takeover rate” to 0.1%, or one container in 1,000, while computers manage the handling of the others from start to finish.

The high-speed network allows a crane or truck to react to a command in 1/100th of a second, even though the ships are 500 meters (one-third of a mile) away from the control room, according to Liu Xiwang, manager of the port’s information department.

Yue, the Huawei executive, was reluctant to say whether it needs processor chips or other foreign inputs that might be disrupted by U.S. sanctions.

“I really don’t know the answer to your question,” Yue said after being asked twice about the sources of critical components. He compared it to buying a cup of coffee: “I don’t know who supplies the cup, the coffee beans and the water.”