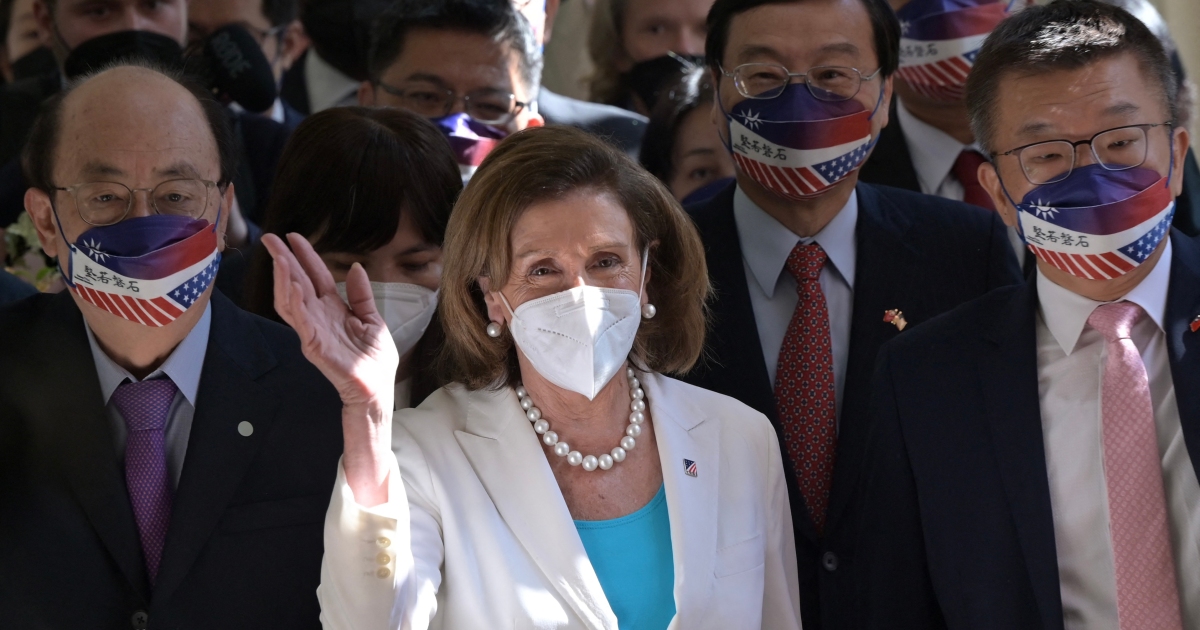 Beijing says US House speaker disregarded its concerns and resolute opposition to her ‘provocative’ visit to self-ruled island.

China has announced unspecified sanctions on Nancy Pelosi and her immediate family, following the visit by the speaker of the United States House of Representatives to the self-ruled island of Taiwan earlier this week.

A Chinese foreign ministry statement on Friday said Pelosi had disregarded China’s concerns and resolute opposition to her visit – China claims Taiwan as its territory and opposes it having its own engagements with foreign governments.

There were no details about the sanctions on Pelosi, but such moves are generally mostly symbolic in nature.

Slamming her trip as a provocative action that undermined China’s sovereignty and territorial integrity, Beijing has moved to halt cooperation with the US on eight specific measures, including climate change, military issues, anti-drug work, talks on cross-border crime prevention and on repatriating undocumented migrants.

It has also held live-fire drills in waters near Taiwan – the largest conducted by China in the Taiwan Strait – that are expected to go on until Sunday.

Pelosi, the second in line to the presidency, was the highest-ranking US official to visit Taiwan in 25 years.

On Thursday, the White House summoned Chinese ambassador Qin Gang to condemn escalating actions against Taiwan and reiterate that the US does not want a crisis in the region.

China’s insistence that Taiwan is its territory and threat to use force to bring it under its control has featured highly in ruling Communist Party propaganda, the education system and the entirely state-controlled media for the 73 years since the sides divided amid civil war in 1949.

On Friday morning, China sent military ships and fighter jets across the mid-line of the Taiwan Strait, the Taiwanese defence ministry said, crossing what had for decades been an unofficial buffer zone between China and Taiwan.

Five of the missiles fired by China since the military exercises began on Thursday landed in Japan’s Exclusive Economic Zone off Hateruma, an island far south of Japan’s main islands, according to Japanese defence minister Nobuo Kishi. He said Japan protested the missile landings to China as “serious threats to Japan’s national security and the safety of the Japanese people”.

Japanese Prime Minister Fumio Kishida, who met Pelosi in Tokyo on Friday, said China’s military exercises aimed at Taiwan represent a “grave problem” that threatens regional peace and security. He added that the missile launches need to be “stopped immediately”.

For her part, Pelosi said China could not stop US officials from visiting Taiwan.

“We have said from the start that our representation here is not about changing the status quo in Taiwan or the region,” she told a news conference.

“The Chinese government is not pleased that our friendship with Taiwan is a strong one,” Pelosi added. “It is bipartisan in the House and in the Senate, overwhelming support for peace and the status quo in Taiwan.”

China said it summoned European diplomats in the country to protest against statements issued by the Group of Seven nations and the European Union criticising threatening Chinese military exercises surrounding Taiwan.

Kenya media council: ‘No one’ asked to stop election tallies