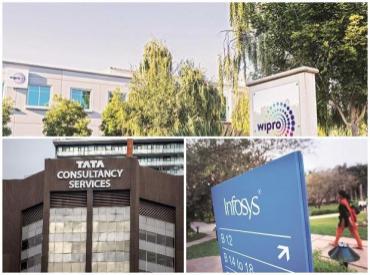 Shares of information technology (IT) companies were in demand on the bourses on Friday with Wipro and Tech Mahindra hitting all-time highs, while Tata Consultancy Services (TCS) and Infosys were quoting close to their respective record highs on the BSE.

Besides Wipro and Tech Mahindra, a total 10 stocks including Mastek, Mindtree, Happiest Minds Technologies, Mphasis and Coforge too hit their new highs in Friday’s intra-day deals.TCS, meanwhile, gained 3 per cent to quote at Rs 3,309, while Infosys was up 2 per cent at Rs 1,451.55. TCS had hit a record high of Rs 3,358 on April 9, 2021 and Infosys had touched a high of Rs 1,480 on April 12.

Among other individual stocks, Tech Mahindra hit a record high of Rs 1,082, up 2 per cent on the BSE, surpassing its earlier high of Rs 1,081.35 touched on January 11, 2021. In the past one week, the stock has gained 6 per cent after a Economic Times report suggested that the company is looking for acquisition in Europe to upgrade its capabilities in cloud computing, 5G, SAP and Salesforce. The company is also planning to hire 250 employees in Nordic region over next 18-24 months, the report said.

Share of eClerx Services were also locked in 20 per cent upper circuit band at Rs 1,617.35 on the BSE after the company reported healthy March quarter numbers (Q4FY21) with revenues up 19.3 per cent quarter on quarter (QoQ) in constant currency terms and 19.7 per cent QoQ in reported terms. The stock had hit a record high of Rs 1,775, in August 2016.

In January-March quarter (Q4FY21), Tier-1 IT Services’ revenue growth was tad lower at 3.7 per cent quarter on quarter (QoQ) USD as compared to previous two quarters. Three out of five tier-1 IT companies reported a miss on revenue estimates.

Yet, analysts at Prabhudas Lilladher continue to be confident of a strong demand environment and believe the miss is only due to moderation of revenue growth post two quarters of strong growth. “Revenue growth was led by strong demand momentum in BFSI and sustained recovery in manufacturing & retail sectors. Communications vertical was weak for all companies,” it said in a Q4FY21 result review report.

Analysts at Edelweiss Securities, for instance, remain confident that like in past three IT upcycles, multiple re-ratings will be sharp in the early phase of this cycle as well, followed by earnings upgrades as the Street plays catch up. The brokerage firm argues the current cycle, in that sense, should not be different either.

Putin tells Biden: ‘Don’t be mad at the mirror if you are ugly’, compares Capitol rioters to his own ‘dissent’

Report: 9 Of The 10 Republicans Who Voted To Impeach Trump Facing Primary Challengers

Flare out to uphold family honour

In Pictures: Across US West, drought arriving dangerously early

I thought my crocodile attack twin was dead when her body floated to surface after hearing her screams, sister reveals

Garland to Discuss Protections for Reporters With News Leaders

This $60 training package can give you a headstart learning Python

Niantic and Hasbro are making a Transformers AR game

Amazon’s latest Echo Buds are $40 off for Prime members

The Legion 5 Pro is Lenovo’s best gaming laptop yet

I Basically Live in Mango, Zara, and H&M Pieces—These New Items Are Too Good

90 Day Fiance Happily Ever After Recap: Brandon Gibbs and Julia Trubkina Storm Out of Betty’s Ambush!

Bitcoin climbs near $40,000 after Musk says Tesla could use it again

Woman, 18, ‘dies having sex on her wedding night after suffering heart attack’

Quashie’s season over after Achilles injury

Airline stocks have soared. They’re not in the clear yet