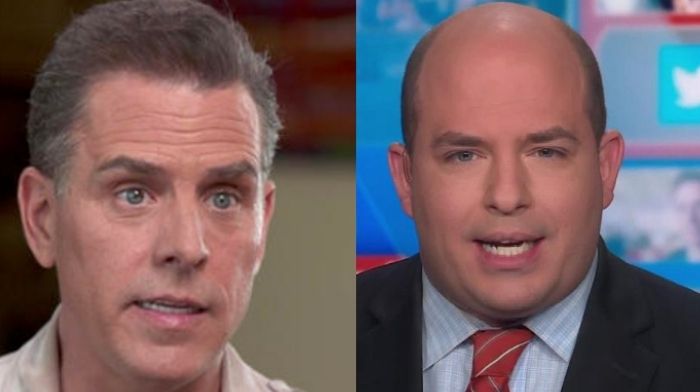 CNN’s Brian Stelter just shamelessly used his show “Reliable Sources” to promote Hunter Biden’s new memoir “Beautiful Things,” in which the son of the president details his past struggles with addiction.

Stelter went so far as to call the book “extraordinary” and “breathtaking,” applauding Biden for the “honesty” he showed in it.

“I’ll tell you what, I’ve read a lot of memoirs, I’ve never read a memoir like this one before,” Stelter said after downplaying any questions of a “probe” into Biden’s laptop.

“It is extraordinary. You know, you’ve heard about Hunter Biden over the years,” he added. “You’ve heard all the tabloid coverage, you think you know his story, we know that right-wing media is obsessed with him.”

“This book. This book about addiction,” he added. “About how many times Hunter Biden could have died, the president’s son, it’s breathtaking.”

Another CNN Personality Joins In

Stelter was then joined by CNN’s Kate Bennett, who joined him in gushing over the book, saying that “addiction is really the great equalizer in this country.”

“The depth and scope of Hunter Biden’s addiction and the honesty with which he discusses it, I mean, this was a man who had a serious crack-cocaine addiction as well as a serious alcohol problem, he had his first drink when he was eight years old, a glass of champagne at an event with his father,” she said.

“I think it also shows that addiction is really the great equalizer in this country. It’s the one thing that really brought President Biden to his knees,” Bennett added.

“Take out the last name Biden, this is about addiction, and how to help people and it’s going to resonate for that reason,” Stelter said in agreement.

Related: Hunter Biden Has ‘No Recollection’ Of Meeting The Stripper Who Gave Birth To His Child

CNN’s @brianstelter on Hunter Biden’s new autobiography: “It is extraordinary. You’ve heard all the tabloid coverage … You think you know his story. We know right wing-media is obsessed with him, Fox News always targeting him … But this book, it’s breathtaking” pic.twitter.com/qUYEPzIGrr

Stelter doubled down on Tuesday morning by promoting Biden’s book on Twitter.

“When Joe Biden was vice president, and was mourning the death of his older son Beau, he was also trying to keep his younger son Hunter alive,” Stelter tweeted. “That’s one of the many takeaways from Hunter’s book “Beautiful Things,” which comes out today…”

When Joe Biden was vice president, and was mourning the death of his older son Beau, he was also trying to keep his younger son Hunter alive.

That’s one of the many takeaways from Hunter’s book “Beautiful Things,” which comes out today… https://t.co/7za4fiLe0k

While Biden used his book to open up about addiction, he also used it to shamelessly bash former President Donald Trump.

“I became a proxy for Donald Trump’s fear that he wouldn’t be re-elected,” Biden wrote in excerpts of the book obtained by The Guardian.

“He pushed debunked conspiracy theories about work I did in Ukraine and China, even as his own children had pocketed millions in China and Russia and his former campaign manager [Paul Manafort] sat in a jail cell for laundering millions more from Ukraine.”

“None of that matters in an up-is-down Orwellian political climate,” he continued. “Trump believed that if he could destroy me, and by extension my father, he could dispatch any candidate of decency from either party, all while diverting attention from his own corrupt behavior.”

This piece was written by James Samson on April 6, 2021. It originally appeared in LifeZette and is used by permission.

Democrat Pollsters Admit They Blew It Again In 2020

I Thought I Knew How to Succeed as an Asian in U.S. Politics. Boy, Was I Wrong.