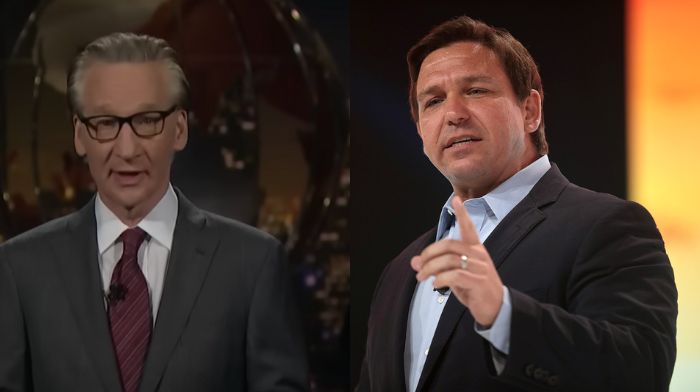 The old saying that “politics makes strange bedfellows,” may never be more on display than with the upcoming midterms and eventual presidential cycle.

HBO Host Bill Maher has been reliably progressive in his views for years, but recently the far-left tilt in the Democrat party has been too much even for Maher to bare. On Friday night’s “Real Time with Bill Maher,” he gave some praise to an unexpected recipient, Florida Gov. Ron DeSantis.

One of Maher’s guest was liberal commentator Krystal Ball. The topic started with the Jan 6 House Select Committee hearings but shifted to whether or not former President Donald Trump should be prosecuted. No word from the panel on exactly for what though.

Ball posited this, “that’s (prosecuting Trump) is not going to solve our problem. Do you think that Ron DeSantis is going to be way better than Donald Trump?” Maher’s response, “Yes, yes I do.” What follows is Maher’s attempt at a left-wing mini-rant to keep his viewer base happy, but it turned out to be off-handed praise.

“He’s not certifiably insane. That’s a great one to start off with. You know what Ron DeSantis won’t be doing? He won’t be poop-tweeting every day. It won’t be, like, having feuds with Bette Midler on Twitter. He’s not an insane person.”

"Trump is a symptom of a deep rot in our society… pic.twitter.com/6G8SxBblD5

RELATED: DeSantis: Texas Should Be Sending Illegal Immigrants Back To Mexico

All GOP Eyes On Trump And DeSantis

On the Republican side, 2024 could be fascinating if the race ultimately ends up being Trump vs. DeSantis fighting for the GOP nomination. While there is no official word yet if Trump will run, the Washington Post reports that advisors in Trump’s immediate circle are attempting to persuade him from making any sort of announcement until after the midterm elections, fearing any move prior to the election might give Democrats some momentum with their voting base as well as left-leaning independents who wouldn’t vote otherwise.

DeSantis has made no announcements other than he is running for reelection in Florida in 2022. Last week, Tesla and SpaceX CEO Elon Musk indicated he would support DeSantis should he decide to run for the White House in 2024.

DeSantis’ response to Musk was humorous, “I’m focused on 2022. But with Elon Musk what I would say is I welcome support from African Americans.” Musk was born in South Africa and is a naturalized citizen.

Elon Musk is rumored to be supporting Ron Desantis for president in 2024. Asked about it, Desantis says he’s focused on 2022, but always appreciates the support of African-Americans. This is gold. pic.twitter.com/gr0b6fHVCT

Rising Status of DeSantis Within the GOP

At just 43, Ron DeSantis is definitely a rising star in the Republican Party. In almost every straw poll taken among Republicans, when Donald Trump is not in the mix, Ron DeSantis outruns the pack of possible nominees by miles.

At the end of May, Wisconsin Republicans held their state convention, complete with 2024 presidential straw poll. In a poll upset, DeSantis beat Trump by a margin of 38% to 32%. The next closest to Trump was former South Carolina Gov. Nikki Haley at just 7%.

But when Trump is included as a possible candidate, overall, he is still topping the list, according to CWS Research polling in Texas. However, what may be an advantage to DeSantis, is that Trump’s base also likes DeSantis, a seemingly win-win situation for Republicans.

Democrats already have a 2024 problem in the fact that they lack confidence in President Joe Biden’s reelection odds, his age being a major factor.

Faiz Shakir, who was Bernie Sanders’ campaign manager in 2020, stated, if the GOP nominee was Ron DeSantis then “I think that would be a different kind of a challenge.”

The aging of the Democrat Party seems to be on the minds of many strategists. Alex Wyshyvanuk is a Democrat data analyst who sees the threat DeSantis could be in 2024 saying they need, “need an equivalent of Ron DeSantis … but not a 70- or 80-year-old — a younger person.”

Not looking to good for sleepy Joe.