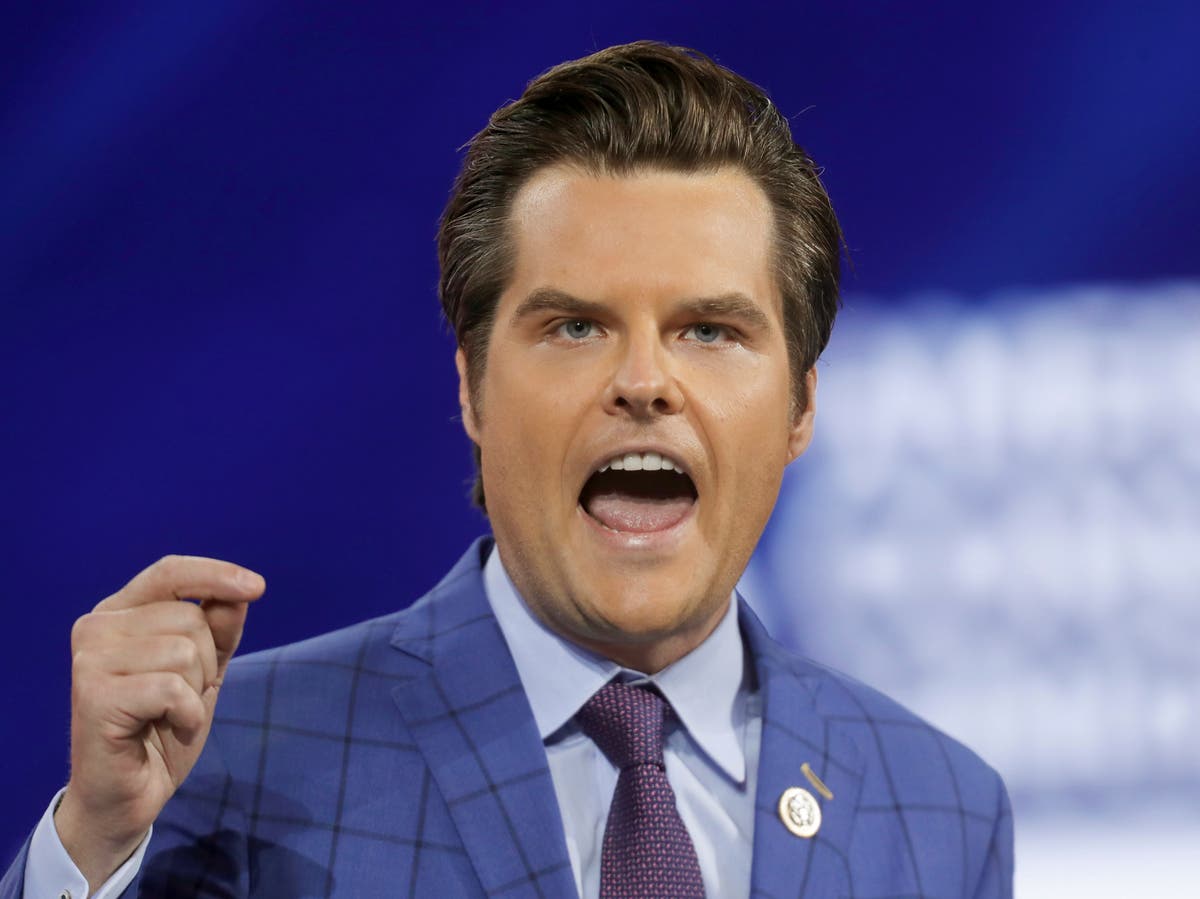 Donald Trump has issued a statement denying claims that embattled Florida congressman Matt Gaetz sought a blanket presidential pardon during the final weeks of his administration. The statement offers Mr Gaetz a rare reprieve as he fights to recover from the news he is facing a federal sex trafficking investigation.

Mr Trump’s successor, Joe Biden, has meanwhile warned Americans against treating the coronavirus pandemic with complacency as he moved forward the deadline for widespread access to the Covid-19 vaccines to 19 April, two weeks earlier than previously planned.

Stephen Miller, one of Mr Trump’s most hardcore anti-immigration aides, is launching an organisation dedicated to obstructing Joe Biden’s agenda in courts across the US. According to Mr Miller, America First Legal will go after “anything the president does that we believe to be illegal”. Mr Miller was a key architect of policies including family separations and the incomplete border wall. It has now transpired that the Biden administration may continue to fill gaps in parts of the barrier that have already been constructed.

“Just don’t jump the gun. I am not going to tell governors what to do. I have just lived it and every time you jump the gun you live to regret it. So vaccinate, put the pedal to the metal on vaccinating more than lifting restrictions,” she said.

Meanwhile, according to four months ago.

Press secretary Jen Psaki is expected to kick off her regular programming shortly. Today she will be joined by the secretary of commerce, Gina Raimondo.

The organisation bears one of the former president’s favourite slogans: America First Legal will target policies put forth by President Joe Biden’s White House administration, using the national court system as a potential avenue to push back against everything from immigration to healthcare initiatives.

Speaking to the Wall Street Journal about what America First Legal may focus on in its legal battles, Mr Miller, the 35-year-old adviser to former President Donald Trump, known for pushing a right-wing, hardline agenda along the US-Mexico border, said: “Anything the president does that we believe to be illegal is fair game.”

UK Covid-19 variant now dominant in the US: CDC chief

The head of the CDC said today that the most common “lineage” of Covid-19 circulating in the US is B117, the variant first detected in the UK at the end of 2020.

Her announcement came just as the UK announced it would offer alternatives to the AstraZeneca vaccine for people under 30 as fears grow it could play a role in blood clotting in very small numbers of people.

Trump denies Gaetz asked him for a pardon

Of all the allegations confronting Matt Gaetz, one of the most sensitive is that he pursued a “blanket pardon” from Donald Trump. According to the ex-president, he did no such thing.

“Congressman Matt Gaetz has never asked me for a pardon,” Mr Trump said in a just-issued statement. “It must also be remembered that he has totally denied the accusations against him.”

Does the US not imprison enough people?

Arkansas Republican Tom Cotton, one of the Senate’s most uncompromising members, has drawn outrage by complaining the US needs to confine more of its citizens to jail, this even as it imprisons 2.1 million people (a rate of 724 per 100,000).

“We have a major under-incarceration problem in America,” Mr Cotton tweeted. “And it’s only getting worse.” He seemed to have been triggered by a CNN article reporting a 33 per cent rise in the murder rate over the last year.

Police expert: force should not have been used on George Floyd

Testifying for the prosecution in the trial of Derek Chauvin, LAPD Sergeant Jody Stiger said that the police officers arresting George Floyd should have used “no force” against him.

Josh Marcus is following the day’s events in the trial.

It is as yet not certain whether Mr Cuomo will run for re-election, but Mr Giuliani sounds bullish about his chances. “Outside of anybody named Trump, I think I have the best chance to win and take the state back,” he said. Graig Graziosi has more.

“The virus still has a hold on us”

The White House Covid-19 Response Team is holding its daily briefing. Dr Rachelle Wolensky, director of the CDC, has said that while vaccination rates are “incredible” hospitals are seeing more and more younger adults admitted with serious disease, most likely because of new variants. The highly virulent B117 variant is thought to be the most widely circulating in the US.

She explained that there are two fundamental facts on the ground: that “the virus still has a hold on us”, and that “we need to continue to accelerated vaccinations and to take the individual responsibility to get vaccinated where we can.”

Trump being sued by members of Congress

Ten Democratic members of Congress have added their names to a lawsuit against Donald Trump over the 6 January insurrection that saw scores of the ex-president’s fans storm the Capitol. Andrew Buncombe has the breaking news.