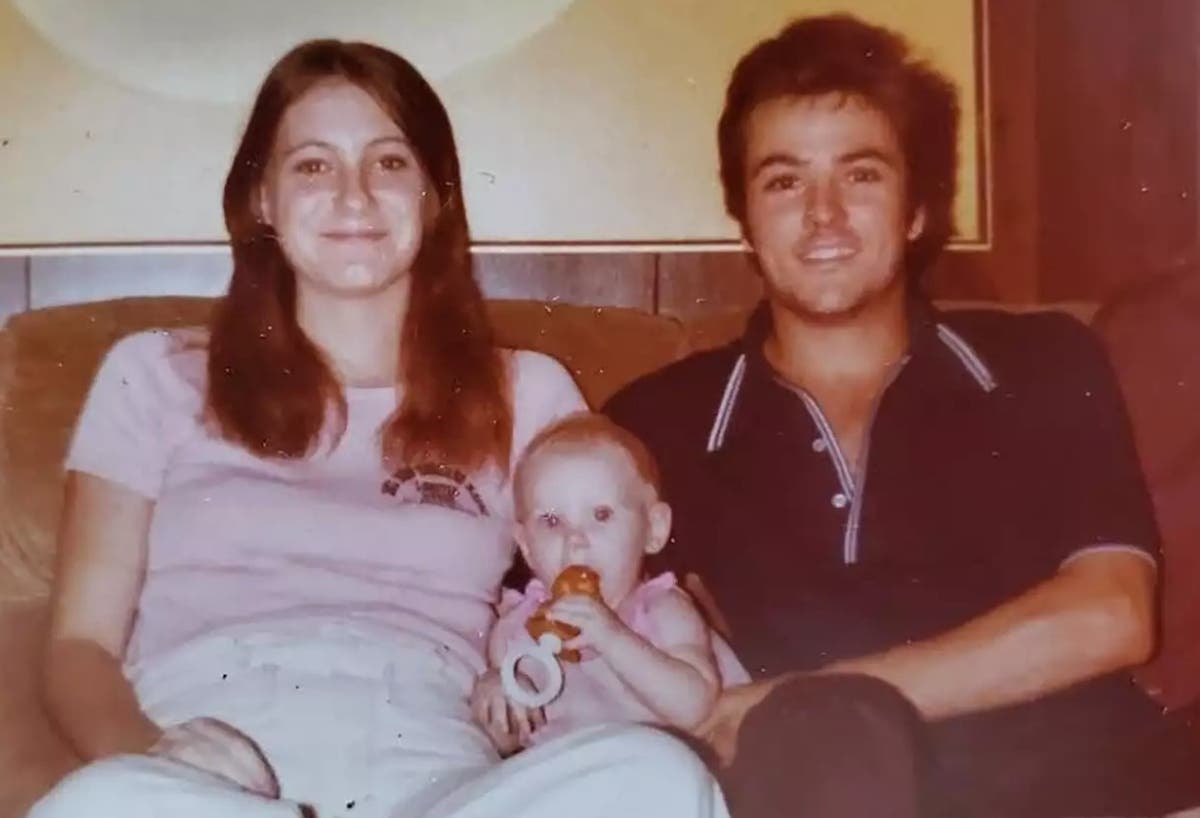 A 42-year-old woman in Oklahoma has been miraculously identified as “Baby Holly”, an infant who went missing in Texas in 1980 after her parents were brutally murdered, as a result of advances in forensic DNA technology.

Officials tracked Holly down to her place of work following a breakthrough in the cold case made by specialist investigators from Identifinders International, broke the news to her and, within hours, she found herself on a Zoom call with her biological grandmother and aunts and uncles, who were overjoyed at her rediscovery.

“I am extremely proud of the exceptional work done by my office’s newly formed Cold Case and Missing Persons Unit,” Texas attorney general Ken Paxton said in a statement announcing the news on Thursday.

“My office diligently worked across state lines to uncover the mystery surrounding Holly’s disappearance. We were successful in our efforts to locate her and reunite her with her biological family.”

John Bischoff, vice president of the Missing Children Division at the National Center for Missing & Exploited Children, commented: “We are thrilled that Holly will now have the chance to connect with her biological family who has been searching for her for so long. We hope that this is a source of encouragement for other families who have missing loved ones and reminds us all to never give up.”

Officials have not yet released details about how precisely they found Holly, how she survived the murder of her parents or how she subsequently came to be adopted.

What is known is that carpenter Harold Dean Clouse Jr, 21, and his wife Tina Gail Linn Clouse, 17, had recently moved to the Dallas suburb of Lewisville from New Smyrna, Florida, when they disappeared 42 years ago.

Two bodies were found in woodland in Harris County near Houston a year later, a male beaten to death and a female strangled, but they were not identified as the Clouses until October 2021, when the cadavers were exhumed and tested by Identifinders analysts.

While their killer or killers have still not been found, the success of the hunt for Baby Holly at least brings an unexpected element of closure to a family that had long since abandoned all hope of finding answers.

Long-term missing persons cases rarely offer neat conclusions, which is perhaps unsurprising given that data collected by the National Missing and Unidentified Persons database reveals that an estimated 600,000 individuals go missing in the US every year.

However, advances in genetics, genealogy and forensic technology mean that disappearances long since written off as unsolvable can, theoretically at least, be re-examined and new tools brought in to turn over fresh clues.

The identification of the late Harry Edward Greenwell in April as the I-65 Killer, who shot dead three Midwestern motel staff in the late 1980s, was just the latest example of this type of investigation casting light on a trail that appeared to have long since been lost.

Mystery vanishings have been solved in the past even without these advances, of course, a few astonishing examples of which follow.

A truly extraordinary story documented in Netflix’s Abducted in Plain Sight (2017), Jan Broberg was abducted twice by the same man, family friend and neighbour Robert Berchtold, once in 1974 when she aged 12 and again in 1976 when she was 14.

Berchtold had become sexually involved with both of Ms Broberg’s parents, with neither aware of the other’s affair, causing both to trust him implicitly and believe him when he said he was taking their daughter on a horseback riding trip.

In fact, he had abducted her and taken her to Mexico, where he married her in secret and convinced her she was part-extraterrestrial and on a mission to mate with a human male.

The FBI intervened and put Berchtold in jail, but he struck a plea deal and served only 45 days, enabling him to kidnap Ms Broberg for a second time two years later, this time hiding her in an all-girls Catholic school after convincing its head that he was her father.

She was found three months later after federal agents bugged Berchtold’s telephone and grew up to become a successful actress.

Another notorious case of a young girl being kidnapped and imprisoned by a prolific paedophile was Jaycee Dugard, who was snatched from a bus stop in Meyers, California, on 10 June 1991 at the age of 11 by convicted sex offender Phillip Garrido and his wife Nancy.

The Garridos kept Jaycee prisoner for 18 years at their home in Antioch, concealing her in his backyard inside a network of tents and sheds and handcuffing her to a bed in which Phillip Garrido repeatedly raped her, resulting in two pregancies.

In late August 2009, Garrido was spotted with two unknown adolescent girls wandering around the campus of the University of California, Berkeley, their eccentric behaviour prompting an investigation that would subsequently lead to Ms Dugard’s release.

The girls would turn out to be her biological daughters, fathered by Garrido.

In April 2011, the couple confessed to her kidnapping and sexual assault and were subsequently jailed that June: he sentenced to 431 years to life imprisonment, she to 36 years to life.

Jaycee Dugard, who appeared to suffer from an acute case of Stockholm Syndrome, has written two books about her ordeal and her journey to reacclimatise herself to ordinary life.

The Pennsylvania mother of two disappeared in February 2002 after dropping her young son and daughter off at school and was not seen again until she turned up in Florida 11 years later.

Working as a bookkeeper for a car dealership at the time, Ms Heist had applied for housing benefits so that she could buy an apartment following the breakdown of her marriage but, when it was denied, she simply “snapped”, as she later explained to her bemused and angry family.

In tears, she was approached on the street by a man and two women who tried to comfort her and ended up inviting her to drop everything and come hitchhiking with them. On a whim, she agreed.

She reportedly spent the next two years sleeping rough under bridges and eating food discarded by restaurants before meeting a new boyfriend and living in his camper van for seven years, the pair paying their way by working as cleaners and taking other cash-in-hand jobs for which they would not need to present ID.

When that relationship ended, she was once more homeless for two years (although a friend says she let her stay in her apartment) before she finally decided to abandon the itinerant life and hand herself in to the authorities in Key Largo.

A later case with parallels to that of Jaycee Dugard, 14-year-old school girl Elizabeth Smart was abducted from her home in Salt Lake City, Utah, on 5 June 2002 by Brian David Mitchell, her family’s handyman.

With the aid of his wife Wanda Barzee, Mitchell held Elizabeth captive for nine months until she was rescued by police officers aided by Ms Smart’s little sister, Mary Katherine, and members of Mitchell’s own family, who recognised him from a police sketch broadcast on America’s Most Wanted and called in the tip.

It emerged that she too had been tied up, raped and threatened with death if she tried to escape. Mitchell was found guilty of kidnapping and sexual assault and sentenced to two life terms in prison on May 2011, his wife given 15 years after admitting her guilt and striking a plea deal.

On the morning of 28 September 2004, Timothy Carney, 24, of Butler, New Jersey, called his boss to tell him he was going to be late for work. He never arrived.

He withdrew $1,000 in cash from an ATM four days later but was otherwise not heard from for seven years.

Unexpectedly reappearing in September 2011, he did not wish to disclose his whereabouts, although his mother Phyllis has pointed the finger of blame at a religious organisation called the Gospel Outreach, which she described as “cultish”.

Baby Holly’s father, Harold Dean Clouse Jr, incidentally, was likewise thought to have been involved with a religious cult prior to his murder.

There was no sign of her for seven days, before two hikers located the wreck of her smashed Jeep Patriot near Big Sur, where she had apparently veered off a cliff in deep mist.

She was found injured at its base, having reportedly been forced to use the radiator hose from her SUV to siphon water out of a nearby creek to keep herself alive.

Another recent case with some parallels to the Baby Holly story, the parents of 13-year-old Jayme Closs were murdered by one Jake Thomas Patterson, 21, when he broke into their Wisconsin home on the night of 15 October 2018 wearing a ski mask and long black coat.

He tied up their terrified daughter – whom he had become fixated upon after spotting her stepping off a school bus – stowed her in the trunk of his car and drove off, forcing her to live in his house in Gordon an hour’s drive away for almost three months before she was finally recognised by a dog walker, who dialled 911.

Closs reportedly now lives with her aunt and was given the $25,000 reward money offered by the company that employed her parents, Hormel Foods, for “rescuing herself”.

Patterson is serving two consecutive life sentences for murder plus 40 years for kidnapping.

“Bye Jayme,” he muttered as he was led out of court.

What are the prospects for Afghan-US relations?