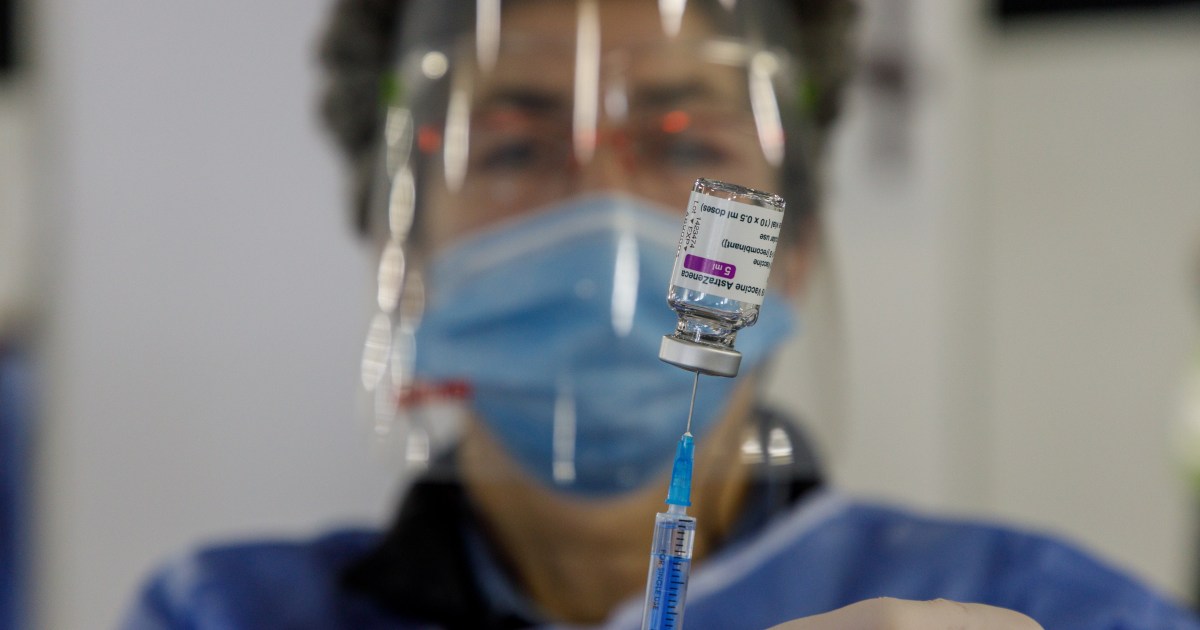 AstraZeneca’s COVID-19 vaccine is back in the headlines again, with European medicines regulators poised to deliver their verdict on possible links between the shot and rare blood clots in a small number of recipients.

The European Medicines Agency (EMA) is set to make its announcement at a briefing scheduled for 14:00 GMT on Wednesday.

Several European countries have stopped using the vaccine on younger adults due to blood clotting concerns.

The EMA has previously said the shot, which was jointly developed with the United Kingdom’s University of Oxford, is safe and that its benefits outweigh any risks.

The vaccine is critical to Europe’s immunisation campaign and a linchpin in the global strategy to get vaccines to poorer countries. It is cheaper and easier to use than rival offerings from Pfizer-BioNTech and Moderna and has been endorsed for use in more than 50 countries.

But inconsistent advice in some countries on who can take it has already raised concerns that AstraZeneca’s credibility could be permanently damaged, spurring more vaccine hesitancy and prolonging the pandemic.

With that in mind, here’s what you should know:

What are the latest fears over the vaccine?

AstraZeneca’s COVID-19 vaccine has had a rollercoaster rollout, with early concerns the shot may be linked to the formation of unusual blood clots and abnormally low levels of platelets in some younger adult recipients.

The EMA’s probe has focused on 62 case reports of an extremely rare clot in the brain, known as cerebral venous sinus thrombosis (CVST), among recipients around the world.

That includes 44 cases out of 9.2 million people who have received the vaccine in the European Economic Area, which comprises European Union member states and Iceland, Liechtenstein and Norway.

The total cited by the EMA does not include all the cases of the condition which have been reported in Germany, where 31 CVSTs have been recorded in the 2.7 million people vaccinated there. Most of the cases have affected young or middle-aged women. Nine people have died.

In the UK, the country’s independent Medicines and Healthcare Regulatory Agency (MHRA) has confirmed seven people have died due to blood clots after getting the AstraZeneca jab.

Overall, the agency has identified 30 cases of rare blood clot events out of 18.1 million doses of the jab administered up to and including 24 March.

It said it was undertaking a “rigorous review” into the reports, but urged people to continue taking the AstraZeneca vaccine.

How have countries reacted?

Some countries, including Canada, France, Germany and the Netherlands, have suspended use of the vaccine among young adults while investigations continue.

Denmark and Norway have halted the rollout of the shot entirely.

Several other countries have continued to use the vaccine with no restrictions, including the UK and Australia.

The UK’s University of Oxford did, however, on Tuesday pause a trial testing the vaccine in children and teenagers as it awaited more data.

What have regulators said so far?

The EMA, World Health Organization, MHRA and numerous other health authorities have said repeatedly that the AstraZeneca vaccine is safe and effective and that the protection it offers against COVID-19 outweighs the small risks of rare blood clots.

Last week, the EU medicines regulator said there is “no evidence” that would support restricting the use of this vaccine in any population.

AstraZeneca has emphasised that its own studies have found no higher risk of clots because of its vaccine.

But earlier this week, a senior EMA official said there was a causal link between the AstraZeneca vaccine and the few cases of rare blood clots.

“It is becoming more and more difficult to affirm that there isn’t a cause-and-effect relationship between AstraZeneca vaccines and the very rare cases of blood clots associated with a low level of platelets,” Marco Cavaleri, head of health threats and vaccine strategy at the Amsterdam-based agency, told Rome’s Il Messaggero newspaper on Tuesday.

However, he also stressed the risk-benefit analysis remained positive for the AstraZeneca jab, even for young women who appear to be more affected by the clots.

Manhunt on for 1,800 inmates after brazen Nigeria prison attack