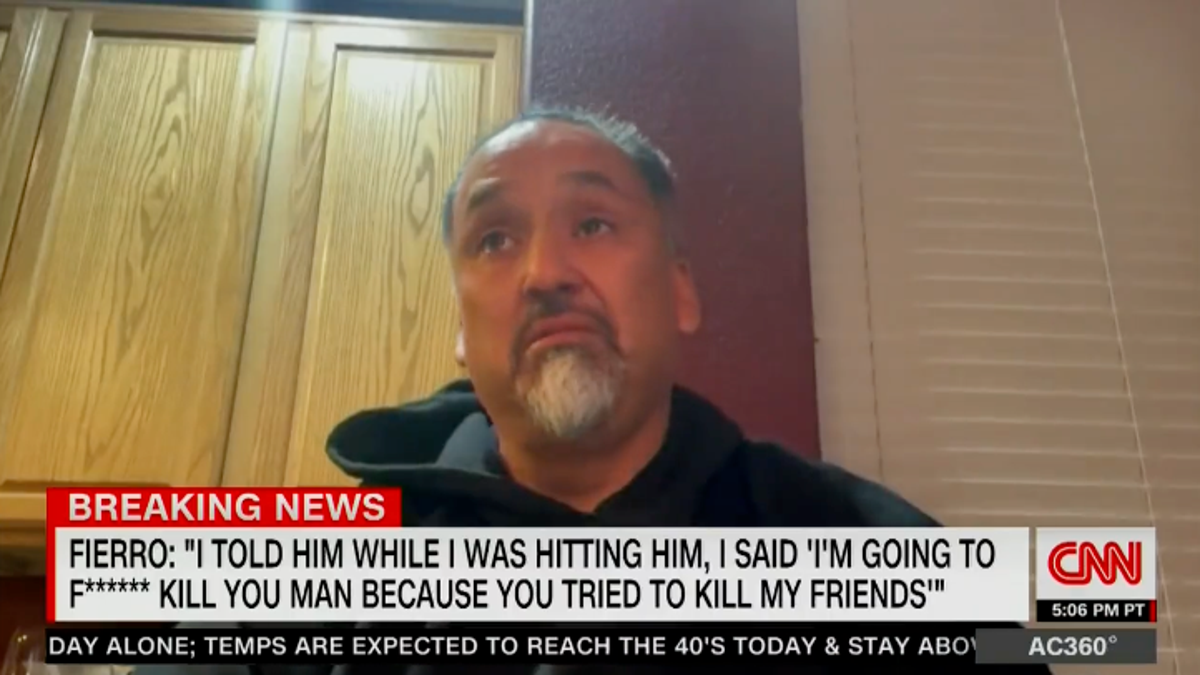 Richard Fierro, the former US Army major who tackled a gunman to the ground who had opened fire on an LGBT+ nightclub in Colorado Springs and beat him unconscious, has given an emotional account of his bravery on CNN.

Speaking to John Berman on the network on Monday night, Mr Fierro described what happened when the shooter began firing in Club Q on Saturday night.

He recognised that the shooter, 22-year-old Anderson Aldrich, was wearing a flak vest which has a handle on it and ran across the room, grabbed it, and pulled him to the floor.

Another person helped Mr Fierro bring Mr Aldrich to the ground and he told them to push the AR-15 rifle away.

“I then proceeded to take his other weapon, a pistol, and just started hitting him wherever I could, but the armour was in the way,” said Mr Fierro. “I found a crease between his armour and his head and I just started waling away with his gun.”

“I told the kid in front of me ‘kick him, keep kicking him’,” he told Berman, adding that he shouted at others to help and call 911.

In an earlier interview with The New York Times, he identified the aforementioned kid as a drag dancer who proceeded to stomp on the suspect with her high heels.

“I was in mode,” he added, explaining he had trained for this in the Army but had retired because he found it all too much and was done with it.

As he choked up, he continued: “And this f***er, this guy, I told him while I was hitting him, ‘I’m going to f***ing kill you man because you tried to kill my friends. My family was in there. My little girl was in there.”

Mr Fierro had been at the club with his wife Jess Fierro, friends, daughter Kassy and her long-term boyfriend Raymond Green, who was one of five victims fatally shot in the attack.

The Fierros run the Atrevida Beer Company in Colorado Springs and in a post on the company’s Facebook page, Jess Fierro wrote that Mr Green, 22, had been dating their daughter since high school.

“No one should ever have to witness bloodshed like this,” Ms Fierro wrote.

“We are devastated and torn. We love our LGBTQ community and stand with them. This cowardly and despicable act of hate has no room in our lives or business.”

Ms Hierro said Kassy suffered a broken knee while trying to escape the gunman, their two friends were shot, and she and Mr Fierro sustained minor injuries in the melee.

“It was absolute havoc,” she wrote.

After police arrived, Mr Fierro, a veteran of four tours in Iraq and Afghanistan, told the Times that he was placed in the back of a patrol car for an hour as he pleaded to be let out to check on his family.

He initially thought he might have killed the gunman, who remains in hospital and has been arrested on suspicion of five counts of first-degree murder and hate crimes.

Police revised the number of injured down from 25 to 18 on Monday.

At a press conference on Monday, Colorado Springs Mayor John Suthers said he had met with Mr Fierro.

“I have never encountered a person who had engaged in such heroic actions that were so humble about it. He simply said to me: ‘I was trying to protect my family’.”

What are people saying about the COP27 deal?

Austin Lee Edwards: What we know about ex-police officer accused of ‘catfishing’ teen and killing her family