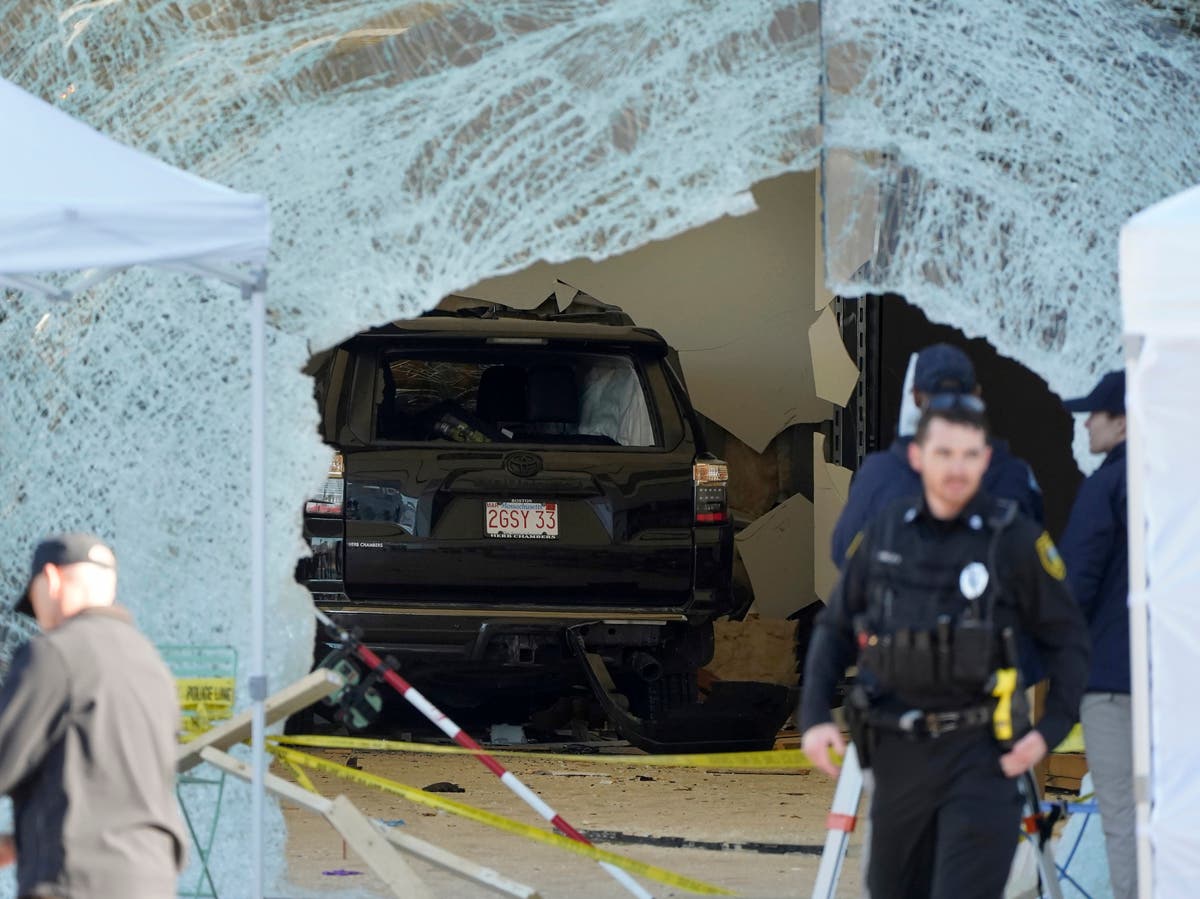 A car has crashed into an Apple store in the Boston suburb of Hingham, leading to the death of one person while at least 17 have been injured.

The victims were taken to hospitals by ambulances after a Black SUV crashed into the store, Plymouth County District Attorney Tim Cruz said during a press conference on Monday.

Mr Cruz said the driver was a man that was in the presence of police officers after the crash. He added that he was unable to say at this time if prosecutorial action will be taken, but that there is an “active criminal investigation going on.”

Hingham Fire Chief Steve Murphy said that several people were pinned against the door at the back of the store. He added that the structural integrity of the building was being evaluated but that were no concerns at the time of the press briefing.

“A dark-colored SUV … went through at a rate of speed undetermined, through a … glass window and struck multiple people,” Mr Cruz told reporters.

“This investigation is active and ongoing. We are very limited as to what we can say at this point,” he added. “Fourteen of the victims were taken to South Shore Hospital and Weymouth and two victims [were] taken to Boston area hospitals.”

Those numbers later grew, with South Shore Health saying during a subsequent press briefing that they were treating 17 people from the crash for everything from head trauma to limb damage, WCVB reported.

The chief of trauma at South Shore Health, Dr Christopher Burns, told the press that “we have multiple patients with life-threatening injuries”.

Two other victims were taken to Boston for treatment, officials said.

The deceased victim has been identified as Kevin Bradley, 65, of New Jersey.

The Patriot Ledger identified the car as a Toyota 4Runner.

Police called for a tow truck to remove the vehicle which was lodged in the back wall of the shop, trapping people inside. Several ambulances from departments some distance away from Hingham were brought to the scene, as well as a medical helicopter.

The crash took place at a shopping centre on Derby Street. A bus from the MBTA was also put into use as triage.

As of 11.49am, the South Shore Hospital wasn’t taking on any further patients, police radio communications revealed, The Ledger reported.

The glass wall of the store had a large hole in it, footage from the scene shows. Following the crash, several people were laying on the ground just outside the store as they were being taken care of by first responders.

“My wife is at Derby Street in Hingham, a black 4Runner drove full speed into the Apple store,” one man posted on Twitter shortly after the crash. “She said there are a lot of injuries − my wife used a spare jacket as a tourniquet.”

One person at the scene told the local TV station that the driver appeared to be bloody but alive when he was removed from the SUV by emergency workers.

Lynne Goyuk told Boston 25 News that “it sounded like a bomb went off. We saw several people who should have sought medical attention, but they wouldn’t go over because they knew other people were critical”.

“I just heard like glass shatter, and everyone ran to the window because they thought it was a smash and grab, and there was just a gaping hole in the middle of the Apple Store,” Emily McKenna told the local station. “I didn’t see the car drive by but someone said it was going pretty fast, so maybe he just lost control.”

US court dismisses suit against Saudi prince in killing

Jude Bellingham is a “unique” talent with a “special” ability to reach the very top. That is the verdict from